"It seemed to me that the only valid people to deal with crime were cops..."
- Ed McBain. 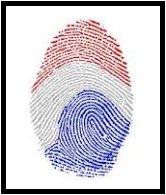 Until a year ago, I was nescient to the fact that the indigenous detective stories of my country had a history that stretched further back into the dim recesses of time than just our two historical mystery writers, Robert van Gulik and Bertus Aafjes, and a bunch of practitioners of police procedurals – who rushed the bookstores and libraries in the decades succeeding WWII. This narrow-minded perception of homegrown detective stories was, ironically enough, corrected by a thriller blog, who once a month pay heed to the neglected and unremembered mystery writers of yore, which resulted in the ghosts of Tjalling Dix and Ben van Eysselstein turning this blog into one of their haunts.
I have stocked up on the works of their contemporaries, which includes several novels from a writer who may proof himself to be the European counterpart of Craig Rice and a collection short-short stories from the pen of a former member of the Dutch parliament, but somehow their foreign littérateurs in crime have kept me from returning to them. However, that I have not been with them corporally does not mean that they were relegated to the outer fringes of my mind. I have been on the lookout, like a sentry vigilantly patrolling the battlements of a castle, for additional stories and observed something that I found very interesting and telling of Dutch mysteries: protagonists are rarely, if ever, amateurs.
As far as I'm aware, there aren't (m)any detective stories in which a nosy, scheming spinster or a cunning vicar unravel a dark plot, involving an impossible murder at a haunted windmill, set against the backdrop of a deceptively quiet village situated in an idyllic spot somewhere in the countryside. The Dutch equivalent of the snooping old maid or the debonair socialite, who dabbles in criminology to pass the time in between drinks, are semi-official characters, such as a private investigator or a lawyer, but more often it's an official homicide detective who's in charge of the investigation.
The best explanation I can offer, at least for the moment, is that professional policeman were picked as their protagonists to appease the local critics, most of whom hate detective stories that fail to evince a glimmer of reality, which might also explain why they shunned away from giving their characters quirks – and tried their hardest to define them by their humanity.
You're unlikely to come across a Dutch homicide cop, when ploughing through the literature, who peppers his speech with French or German phrases or brings his expertise as a bibliophile to the investigation. They are simply normal policeman who tend to reflect the period in which the stories were written. Tjalling Dix's Joris de Corthe is a family man from the 1950s, while Marco Books' detective team from the police precinct of the Utrechtse Heuvelrug, consisting of a potpourri of people, under go the trials and triumphs of modern-day life.
This typical Dutch approach can even be found in characters that operated outside of our borders or were plucked from another era. Van Gulik and Aafjes both adopted a historical character from Asia, two high court judges, and neither of them gave Dee or Ooka a break from their cases to wrestle with bears or to meditate under a waterfall for divine inspiration. Despite the divergence in time and place, Dee and Ooka fit the description of the conscientious, hardworking policeman with a family in the background that are apparently so common for Dutch detective novels from pre-1975.
Of course, there are exceptions to be found to these rules. The always cheeky Appie Baantjer did not only create a very warm and human detective, but also gave him a few quirks that became part of his formula – which earned him an enormous quantity of venomous ink from those reptiles who euphorically refer to themselves as critics. Please note that they almost completely muted their cacophony of condemnation when he started to receive favorable reviews from America. The same story with Janwillem van de Wetering, which is why the last couple of Grijpstra and De Gier novels only appeared in English, but that's a story for another time. Jakob van Schevichaven (writing under the penname Ivans) may proof to be an exception where professional detectives are concerned, but I have yet to acquire any of his books.
That last part will probably proof itself to be an eerie foreshadowing that, somewhere in the future, I will have to come back on every word put down here. Every time I think to have a firm grasp on the genre, I stumble across new information or obscure titles that turn my perception of the genre upside down. It's a curse... but not an unbeatable one. I simply have to read more detective stories!
So expect reviews of Dutch, GAD-styled detective stories to resurface on this blog spot in the upcoming weeks and months.
Addendum: I just checked up on Ivans and his books that may be an exception to the unwritten rule that turn down amateurs for the role of detective are either rare or expensive. Well, not exactly expensive, but I still have a long way to go before I really turn into an obsessive collector who's willing to shell out 40 euros on little known, obscure mystery writer.
Geplaatst door TomCat on 11/11/2011