"Challenge is a dragon with a gift in its mouth. Tame the dragon and the gift is yours."
- Noela Evans. 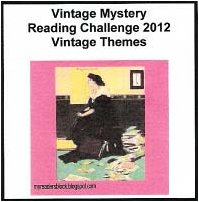 Bev's My Reader's Block plays hosts to a year-round reading tournament, which throws down the gauntlet to the entirety of the blogosphere, daring anyone with a blog to take part in one or more of the themed obstacle courses and finish an X-amount of vintage mysteries before the bells that signal the end of the twelve month time-limit cease their pealing – which is a neat way to gain more converts entice readers to take a peek over their shoulders at the rich and varied history of the detective story.
You don't have to prod me with a summons to contest with the prospect of a grand prize in order to make me pick up a vintage mystery, but nonetheless decided to take part in this parkour with a Murderous Miscellany category entitled Dutch Delinquencies. I made a selection of ten eleven novels from Dutch writers whose mysteries are, more or less, in the tradition of their American and British counterparts, however, their vintage label is not determined by a publication date but by their style – which made it difficult to exclude post-1960s titles from the list. I mean, you can't line up these delinquents without Bertus Aafjes and Appie Baantjer!
Anyway, Bev graciously allowed me to enter the competition, but without having a shot at one of the prices – which was fine with me. I only need the motivation provided by this challenge to finally immerse myself in this particular nook of the genre without any prolonged distractions (like a certain blogger infecting me with his enthusiasm for Paul Doherty).
Here's a list of compatriots that I plan to take on during this upcoming challenge:
Een lampion voor een blinde (A Lantern for the Blind, 1973) by Bertus Aafjes
De moord op Anna Bentveld (The Murder of Anna Bentveld, 1967) by Appie Baantjer
De onbekende medespeler (The Unknown Player, 1931) by Willy Corsari
Voetstappen op de trap (Footsteps on the Stairs, 1937) by Willy Corsari
Een linkerbeen gezocht (Wanted: A Left Leg, 1935) by F.R. Eckmar
Spoken te koop (Spooks for Sale, 1936) by F.R. Eckmar
Dood in schemer (Death at Twilight, 1954) by W.H. van Eemlandt
Fantoom in Foe-lai (The Chinese Gold Murders, 1959) by Robert van Gulik
Het mysterie van St. Eustache (The Mystery of St. Eustache, 1935) by Havank
Klavertje moord (Four-Leaf Murder, 1986) by Theo Joekes
Het geheim van de tempelruïne (The Secret of the Temple Ruins, 1946) by Boekan Saja
Notes:
Three of these titles will be re-reads (Aafjes, Baantjer and Van Gulik) and I have to order two of them (Van Eemlandt and Havank) before I can toss them with others on my to-be-read pile. And perhaps I will read one of Eckmar's books before 2012, but I already have a replacement lined up if that happens.

Tjalling Dix's Een kogel voor oedipus (A Bullet for Oedipus, 1954) has been replaced with W.H. van Eemlandt's Dood in schemer (Death at Twilight).


On January 2 2012, I added another book by Willy Corsari, reputedly a locked room mystery, to the list.


Simon de Waal and M.P.O. Books are missing from the list because I made an effort not to include really recent titles.
Full instructions to participate yourself can be found here.
Geplaatst door TomCat on 11/19/2011