"A good magic trick is like the perfect crime. Not a loose end in sight."
- Akechi (The Magic Express, 1996)

I was inspired to pull The Magical Express (1996), which is the sixteenth volume in The Kindaichi Case Files series, from the congested shelves that give a home to my vast collection of mysteries after reading a post on Pretty Sinister Books – in which John elaborated on his past as a puppeteer and admitted to being a total magic geek. This put the cog-wheels of this Mycroftian brain of mine in motion and dredged up attenuating memories of one of Hajime Kindaichi's cases that is actually quite clever, The Magical Express, and decided to shed some light on those dimming impressions I had of the story. 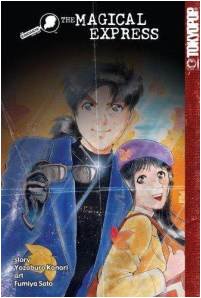 The plot revolves around a wraithlike presence, emblazoned with the moniker The Puppetmaster or Hell's Puppeteer, who's in the middle of on-going magic trick to make a troupe of magicians disappear, one after another, from the grand stage called life – and one of these disappearance acts involves a brilliantly clued and ingeniously executed impossible situation situated in a train compartment under observation.
The first chapter of The Magic Express departs with the arrival of a sealed box at the headquarters of the Metropolitan Police Department, containing a twisted marionette, posed like a mangled corpse, and a dire warning that a spell of death and fear has been cast on a train bound for Hokkaido. It also has some wacky embarrassing high-jinx, involving an adult videotape Kindaichi has in his possession, but these are best glanced over and banished from your mind. Anyway, the line that owns the now star-crossed express provides a bit of entertainment for their passengers with a troupe of renowned magicians, who conjured up a reputation for themselves with a trick known as The Living Marionette, which involves a doll that is magically endowed with life and cuts his own strings before cycling across the stage, but before reaching the final terminal their leader is murdered – and his body disappears under miraculous circumstances.
Gentle Yamagami, a maven where fire illusions are concerned and head of his own enchanting pack of conjures, is found with the handle of a knife protruding from his left temple in an unoccupied compartment, scattered with roses and strewn with balloons, after the train was hastily evacuated after The Puppetmaster called in a bomb thread, but the remains are spirited away in front of several eyewitnesses – including Hajime Kindaichi! The solution is inspired, even though Yazoburo Kanari probably stole a page from the book of one of his fellow brethren, and the (visual) clueing is impeccable! Various parts of the solution, from the inexplicable disappearance of the magician's body to the identity of Hell's Puppeteer, are dangled in front of the reader, like a hypnotists' pocket watch, but it's so in your face that it's easily overlooked and can effectively lead you astray.
By and large, The Magical Express follows a predetermined track decided upon in previous entries, as there's an unresolved death in the past of the magic group, which betrays another avenger-from-the-past ploy to readers familiar with the tropes of this series, but there are some unexpected and pleasant departures along the way. The aforementioned plotting and clueing is one of them, which is continued after the death and disappearance of Gentle Yamagami, as the puppeteer happily dispatches more members of the troupe – saturating the pages with even more clues! It was also a refreshing to watch the murderer, during a theatrical dénouement, slowly morph in a different breed of killer than the ones that usually put in an appearance in these stories and that Kindaichi is accompanied by both Kenmochi and Akechi. Kenmochi continues the tradition that began with Lestrade, while Akechi acts as a foil to Kendaichi, but, more often than not, ends up playing second fiddle – like Simon Brimmer who only seems to fail when he works with his rival on the same case.
Overall, this is one of only two or three volumes from this series that I would unhesitatingly recommend to any mystery fans and shows how underutilized comics are within the genre. So much can be done with visual clueing and you can come up with a lot more labyrinthine-like solutions as they are visualized for you. Shortly put, an excellent mystery on nearly all counts.
Oh, and to everyone who wants to point an accusing finger at me that I pounced on this opportunity to tempt one of our own into reading mystery manga's and hoping that this story will function as a back door introduction to Detective Conan/Case Closed... well... you're completely right! ;)
Geplaatst door TomCat on 11/24/2011