Last year, I reviewed three multi-part episodes of an anime based on Gosho Aoyama's successful, long-running manga series, Detective Conan, which included the superb The Cursed Mask Laughs Coldy and The Case of the Séance Double Locked Room – two unsung classics of the impossible crime genre. The Black Wings of Icarus was a fairly minor detective story in comparison, but had a good, old-fashioned alibi-trick Freeman Wills Crofts would have appreciated. 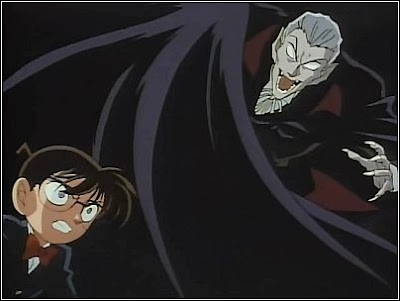 These episodes were highlighted, here and here, by Ho-Ling Wong on his blog and recommended two more episodes in August that were written by the same screenwriter, Hirohito Ochi.

Ochi is a writer with a reputation for crafting "insanely tightly structured" plots and his best episodes are "excellent examples of synergy in mystery fiction" where everything is intricately, but logically, linked together. The Cursed Mask Laughs Coldly and The Case of the Séance Double Locked Room are great examples of Ochi's webwork plotting. And the reason why those two episodes ended up being my favorite locked room tales of 2018.

The Villa Dracula Murder Case is a two-part episode, originally aired on January 26 and February 2, 1998, which is not exactly in the same league as those previously mentioned episodes, but was still an excellent specimen of the locked room mystery – one that fully exploited its surroundings. This anticipated the maze-like, double locked room murder from The Case of the Séance Double Locked Room.

The episode begins with Richard Moore, Rachel and Conan driving to the clifftop home of a famous horror novelist, Daisuke Torakura, who's better known among horror fans and readers as "Mr. Dracula." Torakura earned his fame as a writer of vampire stories and even named his home, Villa Dracula, after that fanged icon of the horror genre. At the Villa Dracula, Moore, Rachel and Conan meet several people and acquaintances of the horror novelist. There's his wife, Etsuko Torakura, and a personal assistant/student, Toshiya Tadokoro. And two house-guests: the editor-in-chief of the Monthly Horror Times magazine, Fumio Doi, and a researcher from the North Kantou University's Folklore Research Center, Shuichi Hamura.

Initially, Richard Moore, the Great Sleeping Detective, is disappointed when he learns Torakura had summoned him to investigate his wife, but a one-million yen fee proved sufficient to paper over any potential hurt feelings. Anyway, a snow storm forces them to stay for the night.

Later that evening, Torakura withdraws to his private study to finish a manuscript. This private study is an octagon-shaped room semi-attached to the main house by a covered corridor. A balcony goes around the room and looks out over the sea (see map below).

However, Torakura never emerged from his study and the main door is securely locked from the outside, but, when they go onto the balcony, they found the french window standing open – inside they make a gruesome discovery. Torakura is crucified to a giant wooden cross, standing against the wall, with a stake driven to his heart and the body was lighted up by a film projector. A splendid and macabre scene. 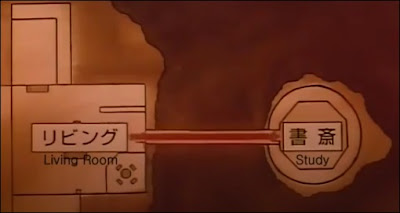 So how did the murderer enter the study? The door on the corridor side was locked on the inside and, while the french window was standing open, there were only footprints directly in front of it. The path to the french window was bare of any footprints. And there's another quasi-impossibility: how did the murderer snatched the stake from the locked or watched collection room that's full with horror movie memorabilia. Yes, the murder weapon was a movie prop.

Firstly, the impossible murder in the octagon-shaped study was more difficult to solve than expected, because the qualities of crime-scene brought two particular locked room stories to mind. The round shape of the room and balcony with its long corridor makes it look like a key-hole, which is nearly identical to the locked room crime-scene from Edmund Crispin's "The Name in the Window" (collected in Beware of the Trains, 1953) – which also looks "like a key-hole." The round balcony around the octagon room and the wooden stake also brought The Rosenkrauz Mansion Murders from the Kindaichi series to mind. And the explanation of that Kindaichi story would have nicely explained why there were only footprints by the french window.

Fortunately, the resemblance to those two locked room stories were only superficial and the original solution was as simple as it was satisfying. Logically explained the bizarre setup of the murder and the clueing was excellently done. Such as the smell of oil paint, a small piece of wood and weird marks in the snow on the roof above the collection room. Everything fitted neatly together and foreshadowed the plot synergy that propelled The Case of the Séance Double Locked Room to classical status. In my book anyway.

Something that was as well done as the intricately presented, but ultimately simple, locked room-trick was the neatly posed false solution. A potential answer to the impossible murder that was shattered to pieces in a dramatic scene when it was revealed that there were no footprints on the roof of the covered corridor, which made it appear as the murderer could have only reached the study had he flown there – "like a vampire." My only complaint is that the murderer's identity was painfully obvious, but the excellently-handled impossible crime made more than up for that.

So, all in all, The Villa Dracula Murder Case was a cleverly plotted, clued and well handled locked room story. Not of the same high caliber as some of Ochi's later episodes, but still highly recommendable to locked room fans. Even if you don't like anime or manga.

Ho-Ling also recommended Entrance to the Maze: The Anger of the Giant Statue of the Heavenly Maiden, but I'll be saving that one for another day.
Geplaatst door TomCat on 1/25/2019