During the forties, John Russell Fearn wrote an introduction to his science-fiction novel, Other Eyes Watching (1946), in which he "revealed that his favorite mystery and detective writer was John Dickson Carr," famously known as the master of the locked room conundrum, but Fearn was as productive in the field of impossible crime fiction as the master himself – e.g. the very Carr-like The Five Matchboxes (1948). Robert Adey observed in Locked Room Murders (1991) that the only mystery novelists who continued to produce locked room puzzles, "in any quantity," after World War II were Carr and Fearn. 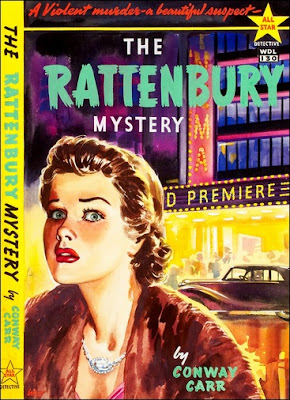 So this made me very curious about one of Fearn's little-known, standalone mystery novels, The Rattenbury Mystery (1955), which was originally published as by "Conway Carr." Was it an overlooked locked room novel? According to Philip Harbottle, the plot definitely has some "nice impossible crime resonances." Well, that was more than enough to get me aboard!

Dorene Grey is a country girl who has dreams of entering "the charmed world of Filmdom" and came to London when she saw an advertisement in the local newspaper, but even she can hardly believe the brief interview ended with Rattenbury casually offering her "a small part in a forthcoming film" – walking out of his office immersed in "pleasant daydreams." However, a handsome-looking stranger, Terry Hilton, accosts her on the street and urges her "to beware of Amos Rattenbury."

Hilton tells her there's a reason why Rattenbury is looking for young woman without previous experience in the film industry, because there are hundreds of actresses in the city looking for work. Only they know too much about his "rotten business" practices. So he preys on "innocent young simpletons" who can be dazzled with "the prospect of becoming a shining star," but Hilton's lack of tact is not entirely appreciated. And she decides to go back later that day to sign the contract. They parted with Hilton giving her a silver-plated whistle with "Metropolitan Police" engraved on it. Yes, he handed her a rape-whistle.

Terry Hilton is actually a widely known actor, whose name has topped "the bills from one end of the country to the other," but is also the younger brother of the Assistant Commissioner of Police, Sir Digby Hilton. He immediately drops by his brother to ask his help with prying Dorene Grey from the Rattenbury's clutches. Regrettably, there's very little Sir Digby, or the police in general, can do to help him with his mission, but, when he's about to take his leave, the desk telephone rang with dire news about Rattenbury – who has been found stabbed to death in his private-office. And the last person to have been with him was the now missing Dorene Grey. Even worse, she left a blood-smeared glove behind!

So the police is out in full force to track down and apprehend the angel-faced Dorene Grey, but the plot takes an unexpected turn into the bizarre world of the pulp detective when Terry and Sir Digby attend a movie-screening of Hamlet at the Pantheon Theatre. 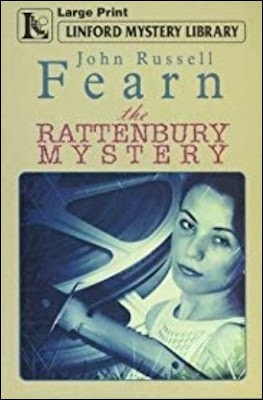 Terry plays the leading role and Sir Digby was completely absorbed in the tragedy on the silver screen when the film was suddenly cut short. A figure in an old-fashioned Inverness overcoat, a wide-brimmed felt hat and black mask appeared on the screen against a gray background. This apparition introduced himself to the cinema audience as The Phantom of the Films, "a shade as unsubstantial as the pictures," who confesses to the murder of Rattenbury, but warns to let no man, police officer or private citizen, seek to discover his identity – because he's nothing more than "an elusive figure from the realms of romance" fleeting across the stage before vanishing. This is where the plot of the story slowly began to morph from a traditional, straightforward detective story (c.f. One Remained Seated, 1946) into a pulp-like crime novel akin to Account Settled (1949) or The Man Who Was Not (2005).

During the second half, Terry Hilton and Dorene Grey are reunited. She goes to an old friend of her late father for help, Professor Niccolo Dangelli, who's one of "the foremost scientific criminologist of the present day" and plans on producing his own movie that will reveal the truth to the British public. However, Professor Dangelli turns out to be as much a suspect as detective and appears to be part of vast, far-reaching conspiracy. So I was starting to get a little worried at this point, but more about that later.

The private-office, where the murder was committed, hardly resembled the proverbial locked room, but, had Dorene not fled the room, she would have witnessed Rattenbury being stabbed by an invisible man! There is, however, an indisputable impossible crime very late in the book: a murdered woman is found in the middle of a patch of ground, of newly turned soil, which was "soft enough to take the lightest footprints," but the only traces the police found were the footprints of the victim – adding another Fearn title to the list Adey overlooked when he compiled Locked Room Murders. The tricks employed here were not too bad, for a pulp-style impossible crime novel, but hardly, as the story claims, "a method hitherto unemployed in the annals of crime." I've seen numerous variation on this particular trick and there's one well-known short story that pioneered it. Still, it was put to good use here and have no complaints about it.

I preferred the first half of The Rattenbury Mystery, as it somewhat reminded me of a Christopher Bush novel, with Terry playing the Ludovic Travers to Sir Digby's Superintendent George Wharton. I wish Fearn had continued to develop the plot along those lines. Nonetheless, the second half, messy as it may look, safely landed on its feet in the final chapter with an ending that was more in line with a traditional detective story. And included the explanation for the (quasi) impossible murders.

The Rattenbury Mystery was an uneven, but fun, detective novel covered with Fearn's (stylistic) fingerprints. Not only did the plot betray his pulp roots, but also laid bare his love for the cinema and film making. Fearn was an amateur cineast who made his own movies and this reflected in the reconstruction of Rattenbury's murder in Professor Dangelli's movie (The Phantom Stabber). So definitely a recommended read for fans of Fearn and the fanatical locked room reader, like yours truly.
Geplaatst door TomCat on 1/02/2019