The Case of the Corporal's Leave (1945) by Christopher Bush

The Case of the Corporal's Leave (1945) is Christopher Bush's twenty-ninth mystery novel about his two detectives, Ludovic Travers and Superintendent George Wharton, which is one of his wartime stories and takes place after Travers was "invalided out of the Army in the autumn of 1943" – now worked on "Special Branch jobs" for an overworked Scotland Yard. My reason for picking this particular title is its tantalizing premise. The story opens with Travers confessing that he had committed "what was tantamount to murder" and it will not be till the story is almost over that "you learn how and why."

The Case of the Corporal's Leave begins when Travers reported to Scotland Yard and found Wharton in "in one of his heavy, preoccupied moods." What harried his mind was the sudden disappearance of a retired "Big Bug" of the India Office. 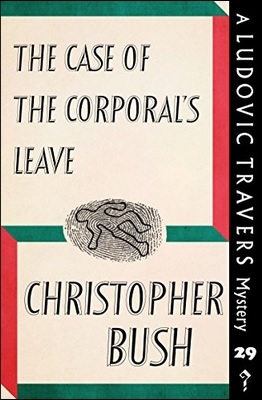 Sir William Pelle is a retired Indian Civil Servant, who has recently taken over the secretaryship of the gifts branch of the Indian Famine Relief Fund, which came with the custodianship over "various items of jewellery" that were gifted to the fund and he was going to have them appraised by a noted antique dealer, Francis Kenray – toting the expensive gifts around in a small attaché-case. Assuming nobody would think that ordinary-looking little case was crammed with at least thirty thousand pounds worth of jewellery.

However, Sir William failed to show up for his appointment with Kenray. He had disappeared without a trace along with his attaché-case and its valuable content.

Wharton is tied up at the office and ask Travers to go down to Kenray's shop, which is run by his stepsister, Grace Allbeck, under false pretenses and surreptitiously pried information in a pub from their employee, Tom Fulcher. And he has a talk with Sir William's secretary, Miss Doris Chaddon.

Travers learned from these conversations that the knowledge of Sir William lugging a small fortune in jewellery had been widely broadcast. This made him feel "vastly different about the curious disappearance," but then Wharton called to tell him that the case had become a murder investigation: Sir William's body had been discovered in the back of a railway truck with the back of his head caved in. Curiously, the body was partly covered in sugar.

As a brief aside, the pathologist discovered that Sir William had "an abnormally thin skull." So thin that they would like to have the skull as "a medical curio" in a bottle of spirit, but how can someone with with an abnormally thin, eggshell-like skull have made it to sixty-four without ever bumping his head? I remember reading about a real-life case from my country, known as Het Pantoffel-Eierschedelarrest (The Carpet Slipper-Eggshellskull Arrest), in which a man threw his carpet slipper at his wife – who was hit in the head and died several hours later. I thought this was the only aspect of the story that was a little too convenient, for the plot, to be the case.

Travers and Wharton have to find a murderer in an interesting cast of characters. There are the aforementioned suspects, who were already present when Sir William was still missing, but they also have to consider one of "the last of the eccentrics" from late Edwardian times, Betram Dale, who's collects rings and once offered the lower story of his house as a police post – providing him round-the-clock police protection for his collection without spending a dime on an expensive security system. But when Travers visited the antique shop to speak with Allbeck, he saw Dale "shaking his fist at someone in the shop." And as Wharton wisely remarks, collectors are "the biggest thieves and liars unhung."

Roger Mavin is a failed novelist and Sir William hired him as a live-in secretary to help him work on his autobiography, which contains an important clue to the solution. Travers even goes out of his way to point out this clue and assures the reader that the passages from the manuscript wasn't an "unnecessary digression or mere padding." Always nice when a mystery writer goes out of his away to assure his readers that the story is fairly clued. Lastly, there's Marion Blaketon, who runs a Prisoners' Reformation Society, but Wharton knows she uses the Society for more nefarious activities.

I should also mention a part of their (early) investigation consists of the reconstructing Sir William's last train journey, which was somewhat reminiscent of Freeman Wills Crofts.

The solution to the murder of Sir William plays on the old-sins-cast-long-shadows theme linked together by a series of (world) events, such as a long-forgotten episode in France and World War II, which would not resulted in the deaths of three people had one of those events not happened – or gone differently. A tricky juggling-act convincingly pulled off by a true plot-technician. Although this approach made it a little difficult to anticipate the full explanation. And I missed the merciless demolition of an intricate, rock-solid alibi or two.

Nonetheless, The Case of the Corporal's Leave, as a whole, nicely fitted together and, while not one of Bush's top-tier detective novels (e.g. The Case of the Missing Minutes, 1936), it's a fine specimen of the jigsaw-puzzle detective story from the genre's Golden Age with a tragic back-story. The answer to the “murder” Travers committed elevated it above the average Golden Age mystery novel, but not quite enough to break through the ceiling of the top-floor.

I'll probably be returning to Bush (again) before too long, because I only just noticed how Carrian the plot-description of The Case of the Hanging Rope (1936) is.
Geplaatst door TomCat on 1/20/2019