On January 31th, 2019, Pushkin Vertigo is finally going to release the long anticipated translation of Soji Shimada's Naname yashiki no hanzai (Murder in the Crooked House, 1981), his second novel to appear in English, which Ho-Ling Wong characterized as a detective story in the vein of "the classics of the good old age" – complete with an entirely original locked room-trick. So I decided to commemorate this upcoming release by rereading his bloody tour-de-force. 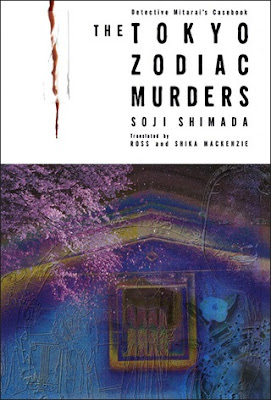 Soji Shimada is considered to be "the doyen of the Japanese form of Golden Age detective fiction," known in Japan as shin honkaku, which can be traced back to the publication of his debut novel, Senseijutsu satsujinjiken (The Tokyo Zodiac Murders, 1981). A horrific, labyrinthine jigsaw-puzzle involving severed body parts and a seemingly impossible murder.

The Tokyo Zodiac Murders is the case of "the Umezawa serial murders" which took place in Japan in 1936. One of the most elusive mysteries in the annals of crime and the story opens more than forty years later, but is prefaced with the last will and testament of Heikichi Umezawa – a mentally unbalanced artist with a deranged plan. Umezawa is obsessed with creating "the perfect woman of supreme beauty," Azoth, who wants to bring into existence. A dark, demented fantasy requiring the body parts of "six virgins of different zodiacal signs" and fate has handed him the women he needs on a silver platter. Namely his daughters and nieces!

Umezawa begins to plot the genocide of his own relatives and strictly follows the rules of alchemy, in correspondence with the astrological signs of the victims, but he's inexplicably murdered before he could carry out his plan. Umezawa had installed iron bars over the windows and skylights. The door of the studio was "a Western-style, single-panel door" that opened outwards with a bar to secure it from the inside, which was in place when Umezawa was murdered. So how did his murderer enter or leave the studio?

However, this is only the beginning of what would become the "genocide of the Umezawa family" and "consist of three separate cases."

The second case is the murder of Umezawa's stepdaughter, Kazue Kanemoto, who was raped, beaten to death and her rooms were ransacked, which made it look like "a run-of-the-mill murder" to the police – probably by a burglar. You would think rape was the one crime you can't possibly use in an traditionally-structured, plot-driven detective novel, but Shimada actually shaped a disgusting rape-murder into an important piece of the puzzle. Finally, there are "the Azoth multiple murders." Someone had carried out the dead artist's instructions to the letter.

Over a one-year period, the six mutilated, often badly decomposed bodies of Umezawa's daughters and nieces are found buried all over Japan. The bodies were found in places corresponding with the metallic elements specified in Umezawa's notes. All of the victim's were missing various body parts. This added one last, tantalizing question to the case: was the murderer successful in "creating the monster," Azoth, and where's this patchwork body buried?

The Tokyo Zodiac Murders never stopped to capture the imagination of the public and it periodically became "a fad to try to solve the mystery," but the case remained unsolved for more than forty years. Until one day, Kiyoshi Mitarai, an astrologer, fortune-teller and self-styled detective, received a client with a letter from her dead father. The letter throws a new light on the baffling aspect of the disposal of the bodied, but the woman wants Mitarai to unearth the whole truth. And clear her father's reputation. 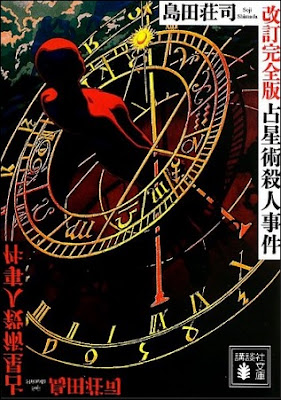 What follows is arguably one of the most composed, cerebral detective stories ever written. The Tokyo Zodiac Murders has a plot involving dismembered bodies reminiscent of Resurrection (1999) and can go toe-to-toe with Michael Slade's Ripper (1994) when it comes to gory murders, but the story takes place forty years after the killings. So the investigation is purely focused on solving the puzzles.

Mitarai spends most of the first half listening to the narrator, Kazumi Ishioka, who's "a huge fan of mysteries" and gives him all the details of the case. During these parts, Mitarai comes up with good, but wrong, explanation for the locked studio that the police took a month to work out – helped by letter-writing armchair detectives of the public. A false solution that was obviously modeled on a very well-known short story by an English mystery writer. Once he has been filled on all the details, Mitarai takes Ishioka to speak with as many people as possible who were linked to the murders. And are still alive. The only real hitch they have in their investigation is that circumstances imposes a deadline on them, but the focal point remains piecing together all of the pieces.

My copy of The Tokyo Zodiac Murders is the original 2005 hardcover Stone Bridge edition and is littered with crime-scene diagrams, maps, charts and illustrations, which helped selling the historical aspect of the 1936 murders. There are enough maps, charts and illustrations to give you the idea of a murder-mystery presented as a case-file story. I appreciated the story had not one, but two, challenges to the readers that fitted the pure puzzle aspect of the plot.

There are, however, one or two blemishes. Firstly, the solution to the problem of the locked studio is fairly routine and surprisingly uninspired. I remember being slightly more impressed with it the first time around, but then again, there are nearly a thousand locked room stories between my first and second read. So I probably have become a bit harder to impress when it comes to the impossible crime genre. Secondly, the motive is weakly handled and tacked on at the end as an afterthought, which would explain the epilogue because it tried really hard to give the murderer the motivation need to carry out such a risky and insane plan – only it felt like it came way too late in the game. It actually came when the game was already over. The reader should have given hints to the motive a lot earlier in the story.

Nonetheless, The Tokyo Zodiac Murders is an impressive debut and the central puzzle of the plot, tying all three cases together, is nothing short of ingenious. Stuff of classics! On top of that, the cleverly hidden murderer is as skillfully handled as John Dickson Carr's tight-rope act in The Plague Court Murders (1934; published as by "Carter Dickson"). Personally, I can't think of a bigger compliment to give to a writer of traditionally-styled detective novels than that.

I'm looking forward to the release of The Murder in the Crooked House and I'll probably be reading, or rereading, another Japanese locked room mystery for my next post. I just have to decide which one.
Geplaatst door TomCat on 1/28/2019