"Sometimes you learn something you don't know is important until, when it fits in with everything else, it turns out to be the key piece of the puzzle."
- Ed Baer (Herbert Resnicow's The Dead Room, 1987)

A month ago, I posted a review of Clifford Orr's second and last published mystery novel, The Wailing Rock Murders (1932), once a rare and highly collectible item, but has since been reissued by Coachwhip as a twofer edition alongside his genre debut – a college-set detective story entitled The Dartmouth Murders (1929). I did not want to wait too long with eliminating this two-in-one volume from the Big Pile. So here's the blog-post that’ll complete my overview of Orr's short-lived stint as a mystery novelist.

The Dartmouth Murders was published in the same year as Ellery Queen's prize-winning debut novel, The Roman Hat Mystery (1929), which introduced the eponymous series-character of Ellery Queen and his policeman father, Inspector Richard Queen of the New York Police Department. A remarkable coincidence for a number of reasons. 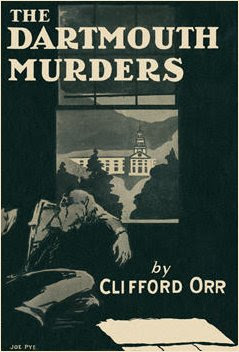 First of all, The Dartmouth Murders also had a father and son poking around in a murder case in a semi-official capacity. Secondly, the father from Orr's novel, Joe Harris, is an amateur criminologist who authored several "so-called detective stories," which happens to be a pretty apt description of Ellery Queen – especially of his early incarnation from the international series. Finally, the victims from both books were missing a particular article of clothing: one of them was found in a theatre without his top hat, while the other had last been seen wearing a stripped pajama, but was found clad in a blue, rain-slicked pajama. So it was quite a coincidence these books were rolling off the press around roughly the same time (give or take a few months).


I was also surprised how few father-and-son detective teams followed in footsteps of the Queens and the Harrises. I'm sure there are a few of them, but I can honestly think of only two examples: Porterfield and Andy Adams from Robert Arthur's marvelous "The Mystery of the Three Blind Mice," which can be found in Alfred Hitchcock's Solve-Them-Yourself Mysteries (1963) and Mystery and More Mystery (1966). And then there are Ed and Warren Baer from Herbert Resnicow's The Dead Room (1987) and The Hot Place (1990).

So far my shallow observations about the similarities between these two mysteries and now that I cut through all of the extraneous stuff, lets finally take a jab at the book itself.

The Dartmouth Murders is told from the perspective of its main character, Kenneth "Ken" Harris, who is called away by his father from a fall house party on campus with the request to fetch from a hotel so he can spend the weekend with him – which takes a lot longer than planned. When he finally returned to the dormitory, "the clock on Dartmouth Hall was just striking three across the campus," he found the door to the dorm room he shared with his best friend locked and deadly silent. Nobody answered his knocking. So he decided to crash in Charlie Penlon's room on the floor below, but his sleep is repeatedly disturbed by the sound of dull thuds against the window.

Kenneth finally ran up the window shade and saw the thumping came from two bare feet: the body of his best friend and roommate, Byron Coates, was hanging by his neck from the rope fire-escape that had been tossed out of their window. Back in those days, the fire escape could be a thick, stout piece of rope you had to slide down from in case of a house fire, but the rope is the first indication that Byron was murdered. A rope the size of the fire escape, "which must be large enough for a hand grip," is unfit for hanging and the bruises under the rope suggest Byron "was dead before it was even tied around his blessed neck." The final piece of evidence is a very peculiar murder weapon that is found inside his body during the post-mortem examination. An "instrument of death" that's used almost immediately after the first murder when a student suddenly drops dead in the college chapel during a service. 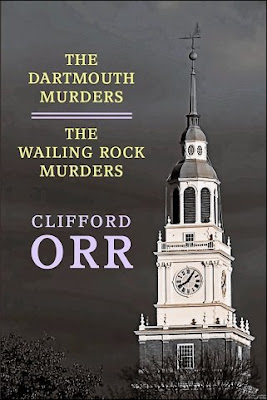 The second death in the chapel came very close to being an impossible crime, but Orr never went the full distance with it. However, the method he employed did anticipate one of John Dickson Carr's earlier Sir Henry Merrivale novels, published as by "Carter Dickson," which demonstrated how this strange murder weapon could be used to stage a full-fledged impossible crime – which makes for an interesting link between both authors. However, the subsequent investigation is a bit of a hit and a miss for various reasons.

Joe Harris practically takes over the entire investigation from the local sheriff, Ad Barker, who refuses to play the role of "the blundering up-county constable" that populate detective fiction and eagerly cooperates with the criminologist. This effectively gives Joe and Kenneth a free hand to act as they wish, which leads to some unusual developments: a "ghost" who looked like one of the victim was seen fleeing the chapel and Kenneth slowly begins to suspect that his father might be personally involved in the case. Why else would there be a photograph of his father in the picture album of the Coates family?

All of these developments and Orr's ability to spin a good yarn keeps the reader engaged, but the plot begins to shake and rattle as the final chapter begins to loom on the horizon.


The truth behind the college murders is firmly rooted in Byron's muddled family history. A history he learned about in a missing letter he received from his mother on the eve of his twenty-first birthday, which contained the motive for his murder, but you can hardly work out the (full) identity of the murderer from all of this information – even when you finally learn the content of the letter. I actually suspected the local inn keeper, because his personal ties to one of the students gave him a motive-by-proxy, but the eventual solution was an even less inspired play on the least-likely-suspect gambit. So that aspect of the plot left something to be desired. Still, I found it to be a well-written detective novel and loved the journey to that final chapter.

So, all in all, The Dartmouth Murders is a dark, moody tale of murder and hidden motives, which is noteworthy for being one of the first college-set mysteries, but plot-wise, the book is standard fare for the period. I agree with Curt Evans, who wrote an introduction for this twofer edition, that Orr's second detective novel, The Wailing Rock Murders, is "an altogether more original work."