A Mere Child's Play of Deduction

"A part of childhood we'll always remember,
It is the summer of the soul in December."
- It Feels Like Christmas (The Muppet Christmas Carol, 1992)

My last blog-posts discussing the work of Herbert Resnicow stem from 2012 and consisted of reviews of two of his later period detective novels, The Gold Gamble (1989) and Murder at City Hall (1995), but after these posts he fell off my radar – presumably because I had exhausted all of his locked room mysteries. I simply used him to supplement my crippling impossible crime addiction and tossed him aside the moment he had served his purpose. It’s shameful, I know, but here we are again and for a good reason!

Recently, I found one of his short stories, "The Christmas Bear," which was listed by Steve Lewis on his list of "Locked Rooms and Other Improbable Crimes." So why not, I thought, add one more title to this year's naughty list of holiday-themed detective stories. A list that already includes J. Jefferson Farjeon's Mystery in White (1937) and Winifred Peck's Arrest the Bishop? (1949). 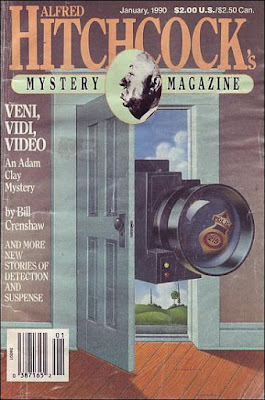 Originally, "The Christmas Bear" was published in the January 1990 issue of Alfred Hitchcock's Mystery Magazine and anthologized by Cynthia Manson in Mystery for Christmas and Other Stories (1990), but also found its way into several other short story collections – such as Merry Murder (1994) and Murder Most Merry (2002). So not a bad print run at all, but the story can easily be added to the line-up of any Christmas-themed anthology, because it’s a bit more than just a detective story.

The first thing one has to note about this short story, comprising of fifteen pages, is its rich texture, which consist of clear-cut characterization and a plot as solid as the originality of its premise. Resnicow even included a false solution that doubles as a tell-tale clue for the actual explanation for the theft of the stuffed teddy bear. But let's begin at the beginning.

"The Christmas Bear" takes place in a small, poor town of only twelve hundred families and the scene of all the action is the local firehouse, which has organized a toy auction to raise funds for a four-year-old girl, Petrina Rozovski, who badly needs a liver transplant. There is, however, a hint of gloom here, because the town is very poor and the characters admit that there's enough "money in the whole county" to pay for the operation. So the toy auction will only get them so far.

Miz Sophie Slowinski, "the youngest great-grandmother in the county," takes her great-granddaughter, Deborah, to the firehouse to look around, but the girl immediately falls in love with a funny looking teddy bear on the top row of a rickety shelf. It's a black-furred, stuffed moon bear, "shinning blueish when the light hit it the right way," with a long snout and "a big crescent-shaped white patch on his chest," but the organizer refuses to take money upfront for the bear – on account of wanting to raise as much money as possible during the auction. But when they return to the firehouse, Miz Slowinski is practically accused of having taken the teddy bear regardless. Naturally, she did not snatched the bear and it seems not very likely anyone else did as well.

The shelves are improvised: boxes piled up with boards across them and these contraptions are liable to fall down if "you look at them crooked." There's "no way to get to the top row" until "you've taken off the other rows," but someone managed to snatch the bear from the top shelf without wrecking the whole construction. So Miz Slowinski set out to find answers and finds several of them in the store of Mr. Wong, who donated the bear to the auction, which is also where she the gets the idea for the false solution.

I actually imagined this false solution, before the theft was discovered, because it was very similar to how the high-hung prizes in game booths at the fun fair are taken down, but Resnicow showed here why he was a modern-day locked room artisan. This false solution would have been the most obvious answer to this small problem, but Resnicow found an equally acceptable answer that fitted the whole story like the final piece of a jigsaw puzzle. As the cherry on top, the motivation gives the story an ending that was diabetic-inducing sweet. Just sickening sugary, but therefore perfect if you're in a jolly holiday mood.

So, I would call "The Christmas Bear" an excellent example of, what they call in Japan, an "Every Day Life Mystery," which additionally is also a splendid Christmas story. It's also an interesting take on the impossible crime story, but this will no doubt result in JJ writing a blog-post questioning the story's legitimacy as a locked room mystery. You're an old humbug, JJ!

Speaking about locked rooms, the next review might be of one, but some of you would argue that's hardly surprising.
Geplaatst door TomCat on 10/19/2016