"The one thing I do know about murderers is that they can never let well alone."
- Miss Marple (Agatha Christie's 4.50 from Paddington, 1957)

The Conqueror Inn (1943) is the eighteenth entrée in E.R. Punshon's decades-long series about a rising policeman, Inspector Bobby Owen of the Wychshire County Police, which was praised by Anthony Boucher in The San Francisco Chronicle as "rewarding for its solid construction" and "the distinguished characterization" of an Irish patriot. It's definitely an interesting and noteworthy addition to the shelf of war-time mystery and crime novels from the 1940s. 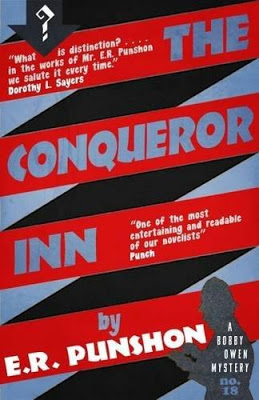 At this point in his career, Bobby Owen is doubling his role as the chief of the Midwych County C.I.D. with the post of secretary to the chief constable, Colonel Glynne, who was growing "more and more used to leaving everything to the young man already recognized as his successor" – which should have bound him to a paper-strewn desk. The key word here is "should," because Owen is on an errand that should have been confided to a subordinate. This errand leads him to a remote watering hole in a lonely, desolate spot of his district.

Mr. Christopherson is the philosophical-minded, but taciturn, proprietor of the Conqueror Inn, which alleges "to be the oldest licensed house in England" and legend tells how William the Conqueror was served wine there. However, the building was torched to the ground, during a skirmish between Highlanders and Dragoons, after which a new structure was erected in 1750. So none of the subsequent owners possessed the paperwork necessary to substantiate their historic claim.

What brought Owen to this remote and desolate place was a strange phone call from the present landlord: Mr. Christopherson placed a phone call to the police, requesting an experienced officer, because he had found a wooden box crammed with "tightly packed bundles of one-pound notes" – a grand total of two thousand pounds. A nice chunk of money in those days, but that’s not all the landlord stumbles across. Not far from the road where he found the box is "a new dug grave." So they open the grave, but even Bobby is shocked by what he unearthed.

The makeshift grave contains the body of a man, "stripped of every shred of clothing," with a single bullet hole directly over the heart, but the horrifying aspect is that "the dead man's face had been battered out of all resemblance to human features." As a result, Bobby finds himself faced with an unusual kind of problem: having to figure out who had been killed?

There are a number of possibilities: one of them is the son of the landlord, Derek, who went missing on the battlefield of Dunkirk, presumably killed, but evidence surfaced suggesting he might have survived. If this is the case, it becomes obvious that his family has been hiding him from the authorities, which also gives rise to another possibility: might the confused, shell-shocked young man might have shot the faceless man? After all, Bobby found evidence of an attempted burglary at the inn. Another candidate for the role of corpse is a young Irishman, Larry Connor, who came over from the Emerald Isle to enlist, but was rejected by the R.A.F. and seems to have gone missing not long thereafter – which is disputed by his uncooperative uncle, Micky Burke.

Bobby finds that nearly everyone involved in the case is annoyingly unaccommodating: the landlord and his daughter, Rachel, talk about as much as a brick wall. Rachel even openly defies Bobby and this throws the prowling policeman in a sulky mood ("women never play fair"). Bobby also encounters a military man, Captain Peter Wintle, who sustained a black eye around the same time as the victim received a sound thrashing, which was two days before the murder, but the captain refuses to slip any information to the inspector. It's noted at the end of the book that this needlessly complicated the case. Finally, there are Mr. Merton Kram and his daughter, owners of a lorry company, who seem to have a marked interest in the outbuildings of the inn. But are they involved in the murder?

So the slightly frustrated police-inspector has to piece to truth together from allusions, half-stated truths, a forged letter, a buried service revolver and burning candle on a mantel piece – all of them, somehow, tied to the box full of one-pound notes, black marketeering and a possible plot from Irish revolutionaries. This makes for one of Punshon's typically complicated, but niftily executed, detective stories that run all over the place. But his plots always seem to manage to land on their feet.

So I was very pleased with the overall story, but the reader has to be warned about one aspect of the plot: the revelation of the murderer’s identity and motivation is anti-climatic, because it turns out to be a rather simple, sordid and even modern kind of crime. One that was complicated by the mutilation, burial and the other aforementioned plot-threads. Some of you might respond with: "What? That's all?" It makes The Conqueror Inn perhaps more of a crime novel than a proper mystery, but I really liked the story as a whole. As you've probably noticed by now, I have a huge soft spot for these war-time detective stories and there was enough here to forgive that weak spot.

Note for the curious: Dean Street Press has previously reissued two other very interesting and excellent World War II mysteries, which are respectively Harriet Rutland's Blue Murder (1942) and Ianthe Jerrold's There May Be Danger (1948). Both of them come highly recommended.
Geplaatst door TomCat on 9/28/2016