"All evils are to be considered with the good that is in them, and with what worse attended them."
- Robinson Crusoe (Daniel Defoe's The Life and Strange Surprising Adventures of Robinson Crusoe, 1719)

Robin Forsythe was a solicitor's clerk at Somerset House, where he masterminded "a fraudulent enterprise" resembling "something out of the imaginative crime fiction of Arthur Conan Doyle," which earned him a spell in prison, but during his incarceration he began to labor on his childhood dream – i.e. trying to earn an honest living as a fiction writer. Forsythe completed his first novel, Missing or Murdered? (1929), while serving his sentence and writing proved to be a more profitable outlet for his criminal schemes. 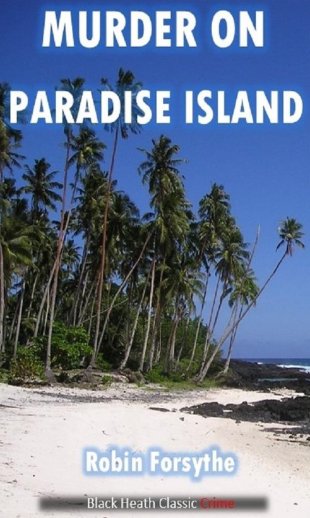 During the brief period between 1929 and 1936, Forsythe wrote, altogether, eight mystery novels: five of them formed the Anthony "Algernon" Vereker series and the remaining three were standalones. Earlier this year, Dean Street Press reissued all of the Vereker mysteries, but nearly all of the non-series books remain out-of-print. The key word here is nearly, because one of them, Murder on Paradise Island (1937), is available from a small publishing outfit as shady as Forsythe's own criminal past.

Regardless, I was somewhat curious and wanted to know if the originality, cleverness and overall quality, found in the Anthony Vereker series, extended to the standalones – which is why I decided to take a gamble. I was not entirely disappointed.

Murder on Paradise Island was the conclusion of Forsythe's literary career, as he passed away in the same year as the book's publication, but it was a career that ended on a captivating note. It's an imaginative and unconventional mystery novel with a beautifully conceived background. One that falls in the same category as Anthony Berkeley's Mr. Pidgeon's Island (1934), Agatha Christie's And Then There Were None (1939) and William Golding's Lord of the Flies (1954), but also reminded me, to some extent, of Arthur W. Upfield's Man of Two Tribes (1956) and Ellery Queen's And on the Eighth Day (1964). So no run-of-the-mill mystery for this review!

Geoffrey Mayne is a young barrister and the story’s protagonist, who recently passed his Bar exam, but was physically rundown and caught influenza – accompanied by a serious complication (i.e. pneumonia) and "he very nearly lost his life." His Aunt Emily suggested a sea voyage to put him back on his feet, but Mayne, who describes himself as "a born spectator," would have been happier to spend several weeks in the country near a good golf course. However, his aunt was "not to be denied" and his mind was strangely longing to see a desert island. One that would fathom his early, boyish delight in Daniel Defoe's Robinson Crusoe (1719), R.M. Ballantyne's The Coral Island (1858) and R.L. Stevenson's Treasure Island (1883).

Well, the young barrister got his wish when he boarded the Statesman liner, Charles James Fox, for a cruise to the Isles of the Pacific, but not in the way he imagined. 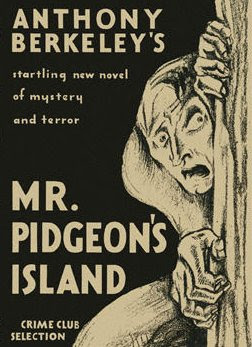 One night, Mayne is awakened by the ship's fire alarm and found himself in "a faint haze of smoke" that "hung in the air of his cabin." An oil tank of the ship has caught fire and the ship is about to sink, but the next thing he remembers, after falling into the sea, is waking up on the white, pearly beach of a Pacific island – which very much seems like paradise. There was "the azure and amethyst waters of a lagoon," clumps of tall coconut palms and "masses of light and dark emerald foliage" leaping "into the sapphire sky," but the island seemed bare of any of the comforts of modern, early twentieth century civilization. No tea, cigarettes, books, music or a simple, home-cooked meal.

However, during his initial exploration of the island, Mayne finds the remains of previous habitants: an abandoned, dilapidated hut, in which he finds tools, an axe and even a German book on nudism, but also traces of the former occupants attempt at farming. Whoever where there before him, they cultivated edible roots, sweet potatoes and brought pigs to the island, which have now reverted to a wild state. But to his surprise, he also discovers other shipwrecked survivors!

The first person he meets is Miss Freda Shannon. She is, personality-wise, the complete opposite of Mayne, which is why these two clashing personalities began to orbit one another on the cruise ship. It's from her that he learns about the other survivors: Mr. Oscar Lingwood is a big, fat-faced man who loves whiskey and started pursuing Freda on the cruise ship. Major Dansie is a retired army officer, who lived in New Caledonia, and knows all about edible plants, fruit and animals, which makes his presence a blessing for the others. He also knows how to tell a good yarn. Victor Hanchett is the "strong, silent type," while Tom Haylock was "the silly ass of the ship" and "a great favorite with everyone." Finally, there are Violet Lovick, Freda’s maid, and Lingwood's manservant, Walter Wink. A very diverse group of characters.

They realize a ship may be years removed from the shores of the island and they might be stuck together for a decade or more, which makes Freda reflect she and Violet might have "to resort to polyandry to prevent bloodshed or even to meet ordinary human necessities." However, that's a future worry as they first have to figure out how to carve out a "normal" life on the island. Not one of the easiest tasks, but one that becomes even more difficult when they start fearing the presence of a hostile person on the island. 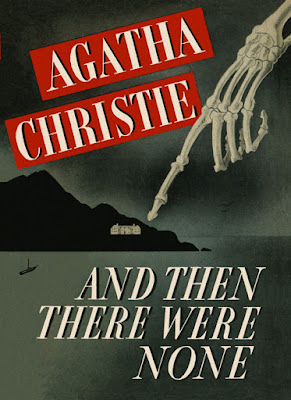 One of the interesting aspect of the island is the presence of a megalithic sculpture, a "childish monstrosity carved on the central crag" of the island, which adds some wonder to the backdrop of the story, but someone shoots at them every time they come near the plateau of the statue. Of course, this "armed unknown" is soon held responsible for the shooting death of one of them. The explanation for the shooter's uncanny ability to remain unobserved makes this aspect of the story a border-line impossible crime, but not enough to entirely qualify it as such and the answer is really simple – which makes a bit disappointing that one facet of the shooting was not clued or hinted at. Nevertheless, you can probably guess how it was done, because it's a fairly old trick.

Overall, the plot is relatively simple and lacks the complexity found in the Vereker series. Even the last-minute turn of events, concerning the last death on the island, was more of a twitch than a twist in the plot. Regardless, I did not view the plot’s simplicity as a drawback, since the book was obviously written as Robinsonade with detective interruptions, which was kind of charming and a novel approach to isolating a group of people from the outside world – normally done by a rather sinister individual. But in this novel, they were actually shipwrecked and the murders arose from their situations as castaways stuck together on a desert island. I thought this was very well done.

If there's anything to complain about, it's the abandonment of the potential plot-thread of the unburied bones and their missing skulls, which was briefly mention, but never explained. Who were they? How did they die? And who took their heads? We'll never know! I was also very prescient while reading the second chapter, because, after discovering the abandoned hut, I knew they would find what was uncovered a couple of chapters later. However, I guess it was a necessary to push forward the narrative by eliminating certain of the immediate obstacles one encounters when being stranded on a desert island. One of the characters even lampshades this by remarking the discovery must have been brought on their paths "by fictional Providence."

Anyhow, time to cut this overlong review short by saying that I enjoyed reading Murder on Paradise Island. It was not as tricky or clever as the author's series novels, but the setting and circumstances, in which the characters found themselves, made more than up for this. So if you like mysteries about a group people cut-off from the outside world, or even classic shipwreck fiction, you might want to add this one to your wishlist.