The Hangman's Handyman (1942) by Hake Talbot

There's one thing readers and publishers of detective fiction have in common: comparing writers to their illustrious predecessors, which is either done to give other readers an idea where a new name fits in the lineage of the genre or simply as a marketing ploy. I remember when an untranslated Paul Halter was talked about as the heir of John Dickson Carr and every new female mystery novelist, since the publication of P.D. James' Cover Her Face (1962), is billed as the second coming of Agatha Christie, but rarely is the comparison accurate or entirely fair – acting more as a millstone around an author's neck. Halter had somewhat of an uphill battle during the 2010s following the translation of his first novel-length locked room mystery, Le roi du désordre (The Lord of Misrule, 1996). Not a story that delivered on the promise of what a novel-length Father Brown tale by G.K. Chesterton would have been like. 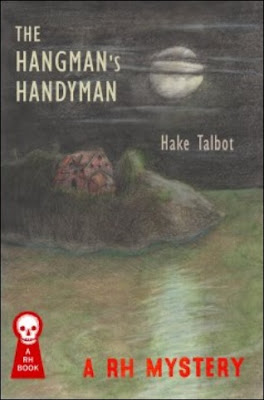 But every now and then, the comparison between two authors click into place like puzzle pieces. And when that happens, it's both a huge compliment and glowing endorsement. Although it happens very rarely.

One such rarity is represented by an American magician, Henning Nelms, who penned two highly regarded locked room mysteries, The Hangman's Handyman (1942) and Rim of the Pit (1944), which were published as by "Hake Talbot" and often likened to the works of two masters of the form – namely John Dickson Carr and Clayton Rawson. Robert Adey noted in Locked Room Murders (1991) that Talbot was "the only author to successfully emulate Carr" and "in fact a very satisfactory mixture of Carr and Rawson" combining "Carr's flair for atmosphere and the bizarre with Rawson's magic tricks." I agree! And it was high time to revisit Talbot's classic contributions to the impossible crime story. So where better to begin than with The Hangman's Handyman!

The Hangman's Handyman brings Talbot's regrettably short-lived series-detective, Rogan Kincaid, to a desolate, rocky island on the Carolina coast. An island curiously named The Kraken with a bay named Gallows Cove where drowned bodies are carried to by the local current and a great stone house. The island is the property of a manufacturing chemist, Jackson B. Frant, who decided to throw a house party. The invitees comprises of his half-brother, Evan Tethryn, who's an English lord and most of the guests were his friends. Such as the girl Evan intends to marry, Miss Sue Braxton. She's accompanied by her father, Dr. Stirling Braxton. Nancy Garwood is another friend of Evan who was introduced to her host only a few days before in a New York night club. Finally, there are the previous owners of the island, Miss Julia Makepeace and her brother, Arnold, who brought along their nephew, Bobby Chatterton. A young man who loves magic tricks and locked rooms.

Rogan Kincaid is a late arrival and finds the gloomy mansion as "quiet as a catacomb" with Nancy Garwood apparently being the only living soul in the place, but she has trouble remembering what, exactly, happened or what happened to the others – until she suddenly recalled that the host had died. Jackson Frant had continued to needle his half-brother during dinner about the family curse that came with his father's title, but not an ordinary family curse. Oh no! This is a "curse that worked backwards" as Evan inherited "the power to curse others," which he demonstrated to half-brother once he had enough of his taunting and sneering jokes. Evan pointed to Jackson and spoke the curse words, "Od rot you, Jack! Od rot you!" Jackson dropped dead on the spot. The body of Jackson was carried up to his own bedroom where, once everyone has come back into the story, a gruesome discovery is made. Jackson had been dead for only two hours, "lying in this cool, wind-swept room," but the body has rotted and decomposed at an almost supernatural rate. And throughout the story evidence is unearthed proving the decomposed body is that of Jackson Frant. 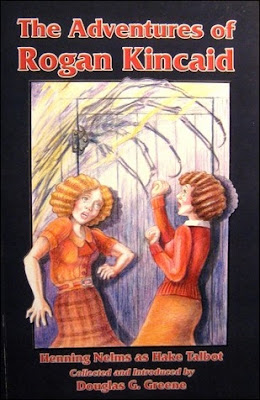 This is not the only impossibility that earned The Hangman's Handyman a permanent place among the most popular and beloved locked room mystery novels. Kincaid is attacked in his dark bedroom by "something smooth, slimy, impalpable," like "a wet slither," who nearly chokes and strangles him to death. This rouses the household and they have to break down the door, because it's locked and bolted on the inside with the key sticking in the lock. But, when the door is busted open, the only person they find inside is an unconscious Kincaid. This attack forces Kincaid to act as a bedridden armchair detective during the second-half of the story.

However, the medical miracle of Jackson Frant's rapidly decomposed body and the assault in the locked bedroom are not the only story elements that makes the book standout. Talbot actually gave his detective an origin story. Rogan Kincaid is a professional gambler and somewhat of an adventurer whose character was formed by the carnival lot, card table and "the crooked little Swiss" who brought him up and taught him "to be cleverer than the other fellow" – which is how Kincaid can make a living by playing "smart poker." A dangerous occupations with people who don't always want to pay their debts, but "the gambler's ruthlessness was matched only by his prowess" and reporter remarks at one point he had seen Kincaid "clean out a poolroom once with eight guys in it." Some were carrying guns, but Kincaid "could throw pool balls faster than they could shoot" and "the way he handled a cue would make your mouth water." This is the only real difference between Talbot and Carr. Talbot leaned ever so slightly towards the better pulp writers like Fredric Brown and Theodore Roscoe. But a mystery writer nonetheless. So the backstory of Kincaid has a thread directly tied to the central puzzle and that spells trouble for the detective when people begin to propose false-solutions. That places him in cross hairs of the police.

So there you have it. A dark, lonely island with a house where people get attacked or perish under seemingly impossible circumstances replete with discussions of elemental spirits, magic trick and locked rooms. Not to mention a man with a grudge and loaded gun roaming the island and the whispered, formless presence of the titular handyman ("the sort that whistles at his work and can tie a noose or pull a customer’s heels with equal alacrity"). The Hangman's Handyman is a remarkable debut brimming with promise, but not without a few imperfections that need to be mentioned. Firstly, while the impossibilities are excellently handled, they are only original in their presentation ("...it dropped on me, as if it had been hanging from the ceiling"). The solutions to both impossibilities are clever variations on tricks seasoned mystery readers have seen before. Secondly, the overall solutions is slightly marred by the fact that the culprit is pretty bad at time management. And being difficult for difficulty's sake. This is what ultimately betrays the murderer even if you fail to figure out how everything was engineers. Talbot badly showed his hand in one brief scene (ROT13/SPOILER: gur puvyqubbq fgbel bs Rina phefvat n xvggra naq svaqvat vgf qrpnlvat pnepnff n qnl yngre vzzrqvngryl pbasvezrq ur jnf ng yrnfg va ba vg. Fhpu na boivbhf cybg-fjrrgrare. That's why the book will always stand in the shadows of Rim of the Pit, but don't let those minor flaws take anything away from The Hangman's Handyman as a delightful, well-handled and slightly pulpy take on the John Dickson Carr-style locked room mystery. Very much recommended to every dedicated locked room reader!