The Case of the Painted Ladies (1940) by Brian Flynn 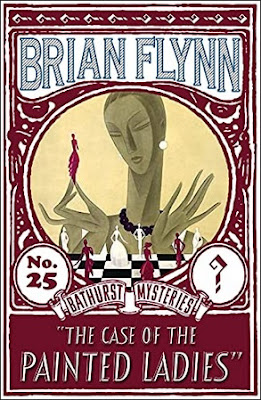 The Case of the Painted Ladies begins with three strange incidents on the final day of the life of a well-known, London stock exchange operator, Aubrey Coventry.

Firstly, Coventry receives an unexpected telephone call from the Napoleon of Wall Street, Silas Montgomery, who, unconventionally and unannounced, wants to make an early morning appointment for two o'clock at his place. Silas Montgomery is "a man of powerful interests and subtle influences." So it's wise not to offend him and Coventry had always wanted to meet the notorious New York operator. Secondly, Coventry attends a church bazaar and his wandering leads him to a tent with the notice, "Madame Zylphara, Palmist and Clairvoyante." This reminded him of the telephone call that morning and decided to go inside, but leaves the tent rather unsettled. Madame Zylphara tried to read his palm, but told him she can't read his future "because there is no future for you." Thirdly, the evening ends with a fancy dress ball, but before changing into his custom, Coventry decides to smoke a cigarette in the park. When he asks the only man in the park for a light, the man "simply snarled at him" and obviously tried to get away from Coventry. Surprisingly, the snarling man in blue overalls is spotted among the attendees of the fancy dress ball. Only to disappear before he can be identified.

So ends a day filled with strange, unsettling incidents as the next one dawns, but Coventry has to stay up to await the arrival of Silas Montgomery. Later that morning, the secretary finds Coventry's body in the study with rope marks on his throat and neck. The scene of the crime is practically on the doorstep of New Scotland Yard and Chief Inspector Andrew MacMorran gets to handle a case before a local police force can mess with "until that awful moment comes when they bellow for help." Nonetheless, MacMorran is faced with a complete mystery as the victim "hasn't been robbed and he hadn't an enemy in the world." On the other hand, Anthony Bathurst is intrigued by all the little, inconsistent details at the scene and the incidents that preceded the murder.

Bathurst notices Coventry had not only been strangled, but the murderer had rendered him helpless by lashing him across the chest, round the wrists and legs to the chair – before strangling him with a second rope. But why untie the body afterwords? Bathurst is also puzzled by two note-books found on the desk, "each appears to have been used," because there's "something about them that isn't right." But what? And who was the pseudo-Montgomery? The elusive, but ever-present, snarling man in blue overalls? Just as mystifying is Bathurst's visit to Madame Zylphara. She goes into a trance tells the detective that there are two women concerned in the case, but there's "no alliance between them, they oppose each other." But you won't realize how mystifying until you reach the ending (ROT13: Znqnzr Mlycunen'f cerqvpgvba naq ivfvba jrer yrsg harkcynvarq). Not even Bathurst himself realizes how closely he's getting to the murderer until a serious, near fatal attempt on his life and a late second victim is discovered. This clears the path to that crossover scene.

Bathurst baits a trap for the killer, but not your common garden variety killer traps. This trap comes in the guise of "a new parlour game for listeners." A BBC radio game show in which four well-known sleuths match wits with a BBC staff team that include Val Gielgud. I was fairly surprise to discover who the three guest detectives turned out to be as they were neither B-list names nor thinly disguised. How did Flynn get away with that? I first thought they all shared the same publisher, but that wasn't the case and suppose he had gotten permission. Perhaps the book was originally part of a BBC promotion? Either way, it was a fun and memorable scene. Now how you expect a crossover to play out. You have to read the story for yourself to discover the identity of the detectives and how the case is drawn to a close.

The Case of the Painted Ladies has a conclusion that appears all neat and tightly wrapped up, but when you let it sink in for a minute, pick it up and shake it a little, you can hear some loose nuts and bolts rattling around inside – betraying some plot-technical and stylistic flaws in the whole design. The murderer appears to have spoiled, what could have been, a clean and perfect crime by making things needlessly complicated. Flynn tried to justify it by pointing out that the biggest obstacle the murderer faced was (ROT13) gung gur bayl jnl ur pbhyq trg va jnf ol univat gur sebag qbbe bcrarq gb uvz, but even then it seems like a risky, roundabout way to achieve something relatively simple (pbzcnerq gb zheqre). There's one particular plot-thread annoyingly left unresolved and Flynn really should have titled the book The Case of the Snarling Man, which is a much better title that doesn't give away a quarter of the solution early on in the game.

So, while the ending doesn't entirely hold up to close scrutiny, The Case of the Painted Lady stands as another typical example of Flynn's mission to simply write good, imaginative and above all entertaining detective fiction. John Norris, of Pretty Sinister Books, reviewed "Three Detective Novels by Brian Flynn" back in February and noted his inconsistencies, or sins, but his "inventive plots, his unceasing imagination and his absolute love for the genre" keeps him (and me) coming back for more. Whenever Flynn's shortcomings or imperfections surfaced, they rarely ruined or sank a novel. The Case of the Painted Ladies very much belongs to the category of flawed, but still good and entertaining detective novels. A treat for fans of the series and seasoned mystery readers.