The League of Matthias (1934) by Brian Flynn

Brian Flynn's The League of Matthias (1934) is the fourteenth entry in the once criminally overlooked and now justifiably revived Anthony Bathurst series, courtesy of Dean Street Press and Steve Barge, which is another shimmering example of Flynn's versatility as a writer and plotter – who tried to do something different with each novel. So what you get is the best of two worlds as the series offers the advantages of both the standalone and series novels. Flynn effortlessly moved from Victorian-era melodrama and pulp-style mysteries to courtroom drama, whodunits and impossible crimes while unapologetic fanboying all over Conan Doyle. 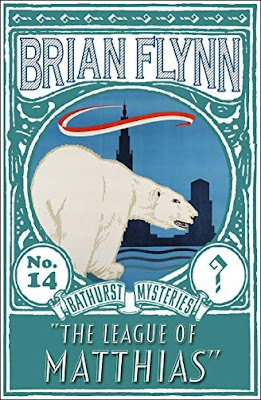 You can easily see where Doyle and Sherlock Holmes might have influenced The League of Matthias. A thriller-like detective novel concerning "one of the biggest criminal organisations ever known" that had "entered the arena of Continental crime" screams Professor Moriarty, but Flynn might have been looking at two of his contemporaries, John Dickson Carr and Agatha Christie. The League of Matthias struck me as Christie's The Big Four (1927) as perceived by Carr. However, the book anticipates most of Carr's more well-known chase mysteries like The Blind Barber (1934), The Unicorn Murders (1935) and The Punch and Judy Murders (1937).

The League of Matthias begins with Lance Maturin touring the continent with two of his friends, Adrian Fawcett and Dennis Hilleary, to help him recover from a broken heart and spirit.

So, after a couple of months of touring, the trio arrive in Antwerp, Belgium, where they visit a dingy cabaret place, the Scarlet Flare, with a beautiful dancer, Philippa, whose frightened eyes seem to be sending "a message from her soul" to Lance – not just him imagining things. Lance is handed a folded note pleading him to come to her dressing room as she's in "deadly peril." Philippa asks Lance to pretend to be her husband as protection against the sinister intentions of Raoul de Verviac and, before he knows it, he accompanies her to a lodging-house in the Rue du Sacré Coeur. Where he wears the pyjama-suit of another man and sleeps next to strange woman, clutching a revolver, to protect her from the villainous De Verviac. It was quite a night. A night that ends with a deadly shootout at the lodging-house and Lance and Philippa fleeing from the Belgian police.

However, it's not De Verviac's body laying at the bottom of the staircase with a bullet in his head, but a Scotland Yard detective, Chief-Inspector Rawlinson, who had "journeyed to Antwerp to deal primarily with three matters."

Chief-Inspector Rawlinson and Anthony Bathurst, working in conjunction with Scotland Yard, were tasked with investigating two seemingly unconnected disappearances and "the sinister activities of the League of Matthias." Firstly, the activities of the league had left a trail of bizarre murders that littered Belgium with the bodies of a convicted abortionist, a discredited actors with a forgery charge hanging over his head and "the most audacious embezzlers of modern times" who "despoiled literally thousands of homes in the Netherlands." So he got what he was due! Stranger even is that all of the deaths took "rather fantastic routes to the Styx."

One victim had his veins opened with pieces of broken glass, while another was burned to a crisp inside a baker's oven. A later victim is "drugged and then tied to the railway lines," but never a gun, knife or poison. Only a tiny, tangible clue filtered through the murky, criminally cautious network and that's the number 13 – "nothing more—nothing less." Anthony Bathurst and Chief-Inspector Rawlinson have another problem on their hands of an entirely different magnitude, but with enough pull to throw the whole affair in complete disarray.

Two people of very different plumage have disappeared. Firstly, there's the daughter of the Bishop of Longbarrow, Miss Philippa Castleton, whose disappearance "excited a tremendous amount of interest throughout the entire country." But, eventually, the excitement died down without her being found. Secondly, there's the disappearance of a distinguished member of the Diplomatic Service, Lance Marutin, whose disappearance is difficult to date. But the authorities have every right to be concerned. Two months previously, a colleague of Maturin had vanished under similar circumstances until his body was fished from the Scheldt.

So, as you probably noticed, the narratives of Lance and Bathurst concern the same characters and locations, but the details either don't seem to fit or out of focus and it takes some work to dovetail everything into a fitting pattern. I can't give anymore details without giving away too much, but I can gush how brilliantly Flynn handled this highly fantastical, sometimes unbelievable, mystery novel.

You see, The League of Matthias can hardly be called credible as a detective, or thriller, which considerably stretches credulity with how all the characters are linked or how the lodging-house "became the centre of a circle with various radii reaching the circumference" – seriously testing readers who want some semblance of plausibility in their detective fiction. And yet... The League of Matthias has this dark, grim edge of realism that makes the whole story much more believable than it has any right to be. And it's not the gruesome nature of the murders, the untimely death of Rawlinson or the demented truth behind the league. It's how the romantic subplot between Lance and Philippa is resolved, which dodged all the usual cliches and beautifully fitted this grim, fairy tale-like detective story. How neatly everything else fell into place was just a bonus.

Just like Carr's The Hollow Man (1935), Flynn's The League of Matthias is the utterly bizarre and fantastic detective story done right while maintaining the integrity of detective story with a clues and clever piece of misdirection. It's also another demonstration why Flynn was to the false-identity what Christopher Bush was to the unbreakable alibi and Carr to the locked room mystery! Flynn comes highly recommended to everyone who loves pure, undiluted vintage detective fiction and has now came dangerous close to replacing Bush as my favorite DSP author.