Murder in the Oval Office (1989) by Elliott Roosevelt

Some years ago, "JJ," of The Invisible Event, started a sporadic series of blog-posts entitled "A Little Help for My Friends – Finding a Modern Locked Room Mystery for TomCat," which turned out to be easier said than done and Jim kindly tied my name to a few abominations – like Andrew Mayne's Angel Killer (2014) and Chris McGeorge's Now You See Me (2019). A series that began promising enough with a review of Elliott Roosevelt's Murder in the Oval Office (1989) concluding that "you could do much worse for writing, plotting, enjoyment and general fun." So a decent locked room mystery novel with a historical hook and gimmick. 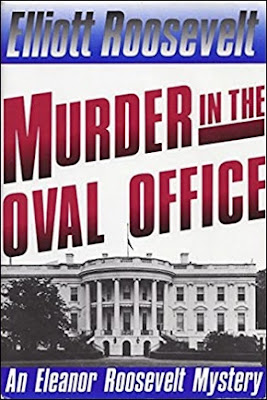 I was recently reminded of JJ's first recommendation by William Harrington's The Grassy Knoll (1993) and decided it was time to take it off the big pile. You see, Murder in the Oval Office and The Grassy Knoll likely have more in common beyond their presidential theme.

Elliott Roosevelt was an American aviator and the son of the 32nd President of the United States, Franklin D. Roosevelt, who died on April 12, 1945, with Carter Dickson's The Punch and Judy Murders (1936) laying unfinished on his bedside table – ominously bookmarked at the chapter "Six Feet of Earth." Reportedly, President Roosevelt was in the habit of taking a detective novel to bed and the family library was likely stocked with all the luminaries of the detective story's Golden Age. So it's not surprising he paid tribute to his parents with a series of twenty detective novels starring his mother, First Lady Eleanor Roosevelt, as the detective walking those mean streets of Washington, D.C. But did he write them himself or were they ghostwritten under his guidance?

The publisher always billed Elliott Roosevelt as the genuine author of the series and even when he passed away, 1990, the series continued with the explanation that the prolific Elliott had left behind a stack of completed, ready-to-publish manuscripts to pad out the decade. And that's exactly what happened. William Harrington committed suicide in 2000 and revealed in his self-written obituary that he had ghostwritten the presidential mystery novels credited to Elliott Roosevelt and Margaret Truman, which earned him credit on the last book in the Eleanor Roosevelt series (Murder at the President's Door, 2001). However, as noted in my review of The Grassy Knoll, Harrington's claims have not gone entirely undisputed.

So, now that we've got that out of the way, let's take a look at the detective novel that used the most famous room in the United States to stage an old-fashioned locked room mystery.

Murder in the Oval Office is the sixth title in the series and takes place, in 1934, when Roosevelt was sixteen months into his first term and the White House hosted a dinner in honor of the Secretary-General of the French Foreign Ministry, but Alabama Congressman Winstead Colmer receives a message – excusing himself from the table. This is shortly followed by a gunshot coming from the Oval Office. The double doors between the Oval Office and the secretaries' office had to be broken open and inside they find the body of the congressman with a bullet in his head with the doors "bolted shut from the inside" and all the windows "securely latched." So what else could have been than suicide? There are some nagging details and a surfeit of motives. 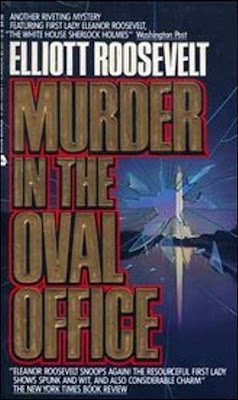 Representative Winstead Colmer chaired the Auditing Standards Subcommittee of the House Banking and Currency Committee and "the evidence adduced by him had embarrassed bankers all across America," which allowed his "subcommittee was drafting legislation to tighten auditing standards on banks." But there also rumors swirling around that he impregnated a young girl. And why does his pregnant wife refuse to tell where she was on the night of the murder? Enter Eleanor Roosevelt who has to find a way to juggle her duties as First Lady with playing amateur detective as she assists Gerald Baines, Secret Service, in helping to find the killer. Something that becomes all the more difficult as a headline chasing J. Edgar Hoover tries to horn in on the case.

This is where Murder in the Oval Office becomes a mixed bag of tricks. Firstly, there's the historical content that's littered with cameos of historical characters and future presidents, but it tries to be too cute with its winking at the future. A young Lyndon B. Johnson appears, but Eleanor Roosevelt dismisses him as "an awkward fellow" who "would never amount to much." Louisiana Senator Huey Long also makes an appearance and the President remarks he could spare him, but "wouldn't want to lose him by murder." And that's the nicest thing the book had to say about Long. Honestly, the depiction of Long, while not wholly undeserved or even untrue, comes across as a little petty considering Roosevelt adopted many of his rivals proposals in the wake of Long's assassination and it came across as spiteful – especially with the name of the winner plastered all over the book. On the other hand, I enjoyed the scene in which Eleanor Roosevelt discusses the locked room problem with Major Eisenhower.

Major Eisenhower believes there has to be "some idiosyncrasy" in the locked room and therefore the murderer must be "someone with special, intimate knowledge of the Oval Office." Someone who knows that idiosyncrasy. The locked room puzzle here is not delegated to the background, but is thoroughly investigated and comes with a floorplan of the Oval Office, diagrams of the locks and bolts and the problem how the murderer though a bolted door is thought and talked about. Unfortunately, the locked room-trick is fairly routine. Not unacceptable or anything. Just not very original (particular in 1989) and it's actually the last diagram that gives the trick some weight as it showed the trick was custom-fitted for the Oval Office. You can say the same about the who-and why, which were fine, but nothing outstanding or special except for gathering all the suspects in the Oval Office for the traditional denouement.

So, yeah, my opinion pretty much aligns with JJ. Murder in the Oval Office is a fun, enjoyable mystery novel with decent enough plot and some historical interest, although a bit colored, but it's main attraction is staging an impossible crime in the titular room – a better trick would have made it something more than mere curiosity. Now I can only recommend it to fans of historical mysteries and locked room completists.

By the way, I don't know why, but while reading Murder in the Oval Office, I got a mental image of Joseph Commings' Senator Brooks U. Banner and Erle Stanley Gardner's Doug Selby as President and Vice-President of the U.S. in the GAD universe. What do you say, my American friends, would you have given your vote to a Banner/Selby ticket?