The Grassy Knoll (1993) by William Harrington

William Harrington was an American writer who ended his own life in 2000 and left behind a self-written obituary in which he revealed to have ghostwritten the detective novels credited to the daughter of President Harry S. Truman, Margaret Truman, but his claim has been disputed – describing his role as that of a research collaborator. So, while not the celebrity ghostwriter he claimed to have been, Harrington had written many novels under his own name since the 1960s and penned six original Columbo TV tie-in novels during the 1990s. Now that's something he should have bragged about in his obituary! 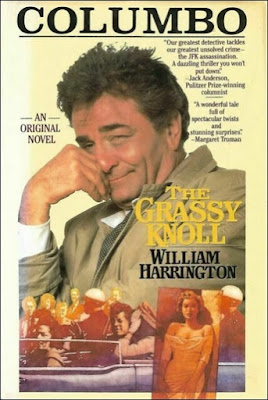 The Grassy Knoll (1993) is the first of Harrington's six Columbo TV tie-in novels and he took an interesting approach to translating the series format, or formula, to the printed page.

All of the usual stuff is there with Columbo and the reader knowing who committed the murder and how it was done, but not why and figuring out the motive gives Columbo an opportunity to act as a proper homicide cop. So it's not merely Columbo stalking to the killers and waging a war on their nerves. It's an inverted whydunit presented as a modern police procedural that unmistakably takes place in the early '90s.

The Paul Drury Show is the most popular show on the KWLF Los Angeles television station, which is basically a televised radio talk show with call-ins, whose well-known host is obsessed with one of the most famous murder cases in the history of the United States – namely the 1963 assassination of President John F. Kennedy in Dallas, Texas. Paul Drury had dedicated forty-eight episodes of his show to the JFK murder case, amusingly pitting dogged detectives and researchers against "some asshole who's read three books about it," which made those episodes the most popular of the show. The opening chapter shows that forty-eighth episode about the assassination that include some of the call-ins ("Have you ever heard of the Society of the Illuminati? Nothing happens those guys don't sanction").

So it was a good show and episode, but the would end very badly for Paul Drury. When he arrived home, there were two people waiting for him in his garage, Alicia Graham Drury and Peter Edmonds.

Peter is the producer of The Paul Drury Show and Alicia is his assistant producer, as well as his girlfriend and Paul's ex-wife, who have fabricated an alibi by leaving a time-stamped message with a recording Paul's voice on an telephone answering machine – using a cutting-edge piece of technology known as Sony Walkman. They also staged a burglary and finished the job by putting two bullets in the back of Paul's head. Alicia and Peter hardly can believe their luck when they meet the disheveled Lieutenant Columbo with his tousled head of hair, crumpled raincoat and wandering mind ("what a dolt!"), because, if they could have "picked a detective to investigate this case," they "couldn't have done better than him." But they pretty soon discover that Columbo is "not as dumb as he acts" as he inches towards a solution.

I was tempted to use the locked room and impossible crime tags for this review, because had the book been played as who-and howdunit, the murder Paul Drury would have looked like a quasi-impossible crime. The house is protected with burglar-alarms, hyper sensitive motion detectors and PIN card system that deactivates the system. There's not much of a mystery about it: Alicia simply held on to a spare card and Columbo knows it. The murderers were also a little to familiar with the layout of the house to have been an outsider, but there's another, somewhat dated, technological aspect to the plot. 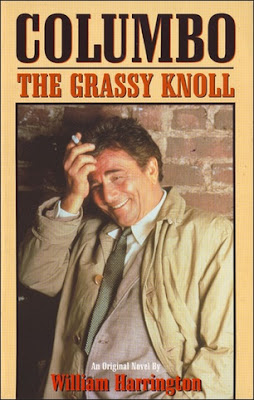 Paul Drury was with the times and had compiled a "private electronic library" on his computer that contained "the world's largest collection of assassination minutiae," which has "the equivalent of thousands of volumes of information stored in it," but the harddisk had been wiped clean by "an outlaw instruction code" – i.e. a telephone transmitted computer virus. But did he make copies of his digital library? There's a collection of microdiskettes, or floppies, that will come to play an important role in the case. Naturally, Columbo needs some modern experts to help him make sense of these modern-day clues, which is really what sets this book apart from the TV-series.

Columbo is not depicted here as a lone wolf relentlessly stalking and pestering the murderers, like prey, but as a cog in the machine of a large police apparatus and even has an assistant, Detective Martha Zimmer. She proves very helpful in resolving another rather amusing plot-thread as Columbo has is ordered to report at the pistol range to requalify with his service revolver. Only problem is that never carries his revolver, lost it and can't shoot to save his life. More importantly, Columbo relies on the expertise of his colleagues to shed light on the various aspects of the case.

For example, the pathologist and an audio-technician proved very useful in helping breakdown the murderer's alibi, but the lack of a clear motive also forced Columbo to delve deeper into the background of his suspects and interviews several witnesses – which eventually brings him to a Las Vegas casino and Caesars Palace. What he comes across are the last remnants of the glory days of the Italian mafia, the legacy of right wing militias and newly discovered photographs that could shed new light on the Kennedy assassination. Those old, grainy photographs revealed their long-held, hidden details when they're "computer enhanced" and touched-up by an artist. So this may very well be one of the earliest examples of the zoom-and-enhance TV trope and it was used in a TV tie-in novel.

Anyway, you can see how The Grassy Knoll is a little bit different from your average Columbo episode, but Columbo is still Columbo, whose sharp mind is cloaked in a disheveled wardrobe, deceiving befuddlement, cheap cigars and homely anecdotes about Mrs. Columbo. Slowly, but surely, Columbo continues to chip away at the case and closes in on the murderers. Columbo is not able to close the whole case as the historical JFK plot-thread ended up raising more questions than it answered. But then again, I suppose that was kind of the point. I just wish Columbo actually came up with a clever solution to the mystery. Even if he couldn't officially solve it.

Nevertheless, the murder of President Kennedy had an interesting connection to the motive and story proposed an alternative motive that has to be turned into a detective or thriller novel. Columbo learns that the assassination has become "a multimillion-dollar industry" with books, documentaries, movies and television series, but those millions would dry up if Drury had "absolute evidence" proving who did kill Kennedy. It would kill a very lucrative industry, because people enjoy "some deep, dark conspiracy" more than the truth.

So, on a whole, The Grassy Knoll is not exactly Columbo as seen on TV, but Harrington deserves praise for understanding that a few hundred pages can tell a more fully realized story than roughly 90-minutes of TV and decided to use it to flesh-out the other aspects of the police investigation – while remaining faithful to the original character. Columbo is still Columbo, but Harrington gave fans a little extra by showing more of Columbo as a homicide cop. I enjoyed it and can heartily recommended to other Columbo fans and mystery readers.

You can definitely expect more from Harrington's Columbo novels sometime in the future as I'm already eyeing The Helter Skelter Murders (1994), The Hoffa Connection (1995) and The Hoover Files (1998). But my next read is going to be an obscure, somewhat hard-to-get (locked room) mystery novel from the 1990s. I actually wanted to return to Christopher Bush or Brian Flynn, but that one arrived today and decided not to let it linger too long. So don't touch that dial!