About the Murder of a Circus Queen (1932) by Anthony Abbot

Back in November, I reviewed an excellent short story by Anthony Abbot, "About the Disappearance of Agatha King" (1932), which might not have been much as an impossible crime story, but the who-and why were splendidly and detailed clued – punctuated with a well-done and satisfying ending. A glittering gem of the short Golden Age detective story that begs the question why Abbot still hasn't returned to the printed page.

So it was time to do some detective work and track down a secondhand copy of one of his long out-of-print novels, which brought one of Abbot's most striking detective novels my way. A novel with a "classic crime in Madison Square Garden" and a mention Robert Adey's Locked Room Murders (1991). 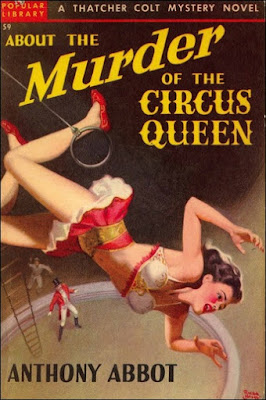 About the Murder of a Circus Queen (1932), alternatively published as The Murder of a Circus Queen, marked the fourth appearance of Commissioner Thatcher Colt, of Centre Street, who's visited in the opening chapter by Colonel Tod Robinson – owner and manager of the Combined Greatest Shows on Earth. Colonel Robinson is "the last of the large independents" and recently obtained an engagement at Madison Square Garden, which required a large investment, but ever since the circus has been plagued by costly accidents. A train wreck destroyed two display floats and a gondola loaded with bleachers and grandstand seats. Sickness broke out along the elephant line, a "peculiar malady" attacked the bulls, their prize lion died of indigestion and trained clown mule broke its leg and had to be shot.

All of that could have been put down to a string of bad luck, but then the star performers began to receive threatening letters warning them, under penalty of death, "not to exhibit their best tricks during the New York engagement."

Initially, a little skeptical ("...I suppose you are advising the newspapers that in spite of these thrilling threats, your star performers are positively going to appear..."), Colt decides to personally tackle the case when the news reaches them that a mechanic had toppled off a high platform. So the police is confronted with a colorful cast of characters who form a closed community that's next to impossible to penetrate and "the black magic of dark ages" that filled the hardened New York policemen with horror.

The star of the show is the Queen of the Air, Josie LaTour, who's "paid the biggest salary in the history of the business" and Colt is an attendance when her flying body performed death defying stunts, but all of a sudden, she began to shake and struggle to keep her grip on the rings – uttering a cry before plunging to her death. Colt knows what he saw was not an accident. An impossible crime with nearly twenty thousand possible suspects and witnesses!

Anyway, Abbot made excellent use of the circus background of the case to fill the MSG with a pool of colorful, sometimes even lurid, suspects. There's the victim's husband, Flandrin, who's a rising young trapeze artist and really seemed to have loved his wife, but also has motives and opportunities to spare. They employed a husband-and-wife team of catchers, Flandreau and Flandra. Marburg Lovell is the millionaire backer of Colonel Robinson who had a side-interest in the Queen of the Air, which appeared to have earned him a black eye. Signor Sebastian is known as the King of the Air, but he's getting older and might be on his way down the ladder. The most curious of the bunch are undoubtedly the Ubangis, of the Mazzi tribe, who only speak a tribal dialect. Something that will become a stumbling as only their witch doctor, the educated Keblia, speaks English and he's conducting his own investigation. 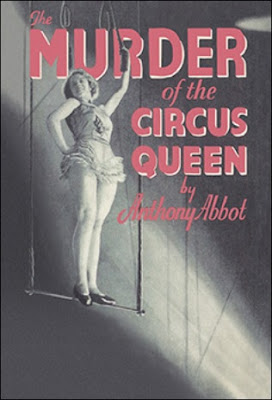 Even more troublesome, the Unbangis possibly have a motive as the temperamental LaTour ("just a human tiger") savagely whipped two of them when she found them snooping around in her dressing room. Understandably, the Unbangis were quite sore at her and had closed door meeting. Throughout their investigation, the police come across "crude, awkwardly shaped" mud images that nevertheless "bore a definite and forceful resemblance to Josie LaTour" with long, sharp needles driven straight through the heart. Some of you are probably gritting your teeth at this point, but the depiction and treatment is not as harsh, or unflattering, as this plot-thread suggests. You'll probably be surprised how their role in the story is played out. Yes, it's a bit rough and unpolished by today's standards, but it's certainly not another The Stingaree Murders (1932).

So what more could you want from a vintage, 1930s mystery novel? A plot, you say. Abbot has you covered there!

Abbot plotted About the Murder of a Circus Queen like a chess player who willingly sacrificed (i.e. gave away) part of the solution to successfully misdirect the reader (this one anyway), not once, but twice. The observant, or seasoned, armchair detective will likely spot something that apparently gives the whole game away, but you'll probably get suspicious along the way, because the police is only too willing to go along with the obvious solution – particular the unlikable D.A. who loves third-degreeing suspects a little too much (see About the Murder of Geraldine Foster, 1930). Regardless, I figured the solution (how it was done) was not as obvious in 1932 as it's in 2021 and assumed Abbot banked on its relative newness to be more carefree with his clues and hints. A line halfway through the story, "what curious motives may exist in the terra incognita of the circus," gave me pause for thought and another suspect occurred to me. Someone who fitted the role of murderer perfectly and the clue of the second (not exactly) impossible crime also appeared to point towards this person.

So I had it all figured out, who, why and how, but then Colt began to talk about enclosing the murderer in "a narrow circle of deduction," a circle growing smaller and smaller, until an unexpected name remained – leaving me with egg and greasepaint on my face. It was comforting to know Colt worked on the exactly the same "false theory" before arriving at the correct solution, but none of that changes the fact that this was another one of my famous Roger Sheringham moments.

Only thing that can be said against the solution is that it only accomplished to skillfully sneak the murderer pass the reader, who's likely too busy with turning red herrings into fantastic theories, while either of the incorrect theories would have given the story a better, more fitting and darker ending. The actual solution is more in the "tadaah, surprise!" category.

But who cares? About the Murder of a Circus Queen is a genuine, fair play detective novel with a fascinating, vividly realized backdrop and a masterly-done piece of double-layered misdirection designed to teach readers who like to pretend they're the flesh-and-blood incarnation Mycroft Holmes a lesson. A small, plot-technical marvel and a fine piece of old-fashioned craftsmanship showing why the 1930s were the Golden Years of the Golden Age. Abbot deserves to be reprinted!