Mike Ashley's momentous anthology The Mammoth Book of Locked Room Mysteries and Impossible Crimes (2000) introduced John Dickson Carr as the man whose name has become "indelibly linked with the impossible crime story," which is the indubitable truth, but comes with a caveat – since his short stories seldom reached the same heights as his novel-length locked room mysteries. But the keyword there is seldom. 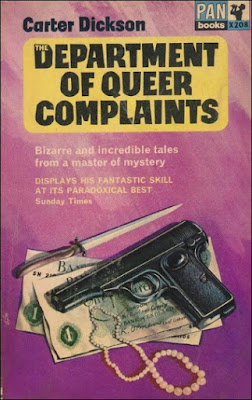 "The House in Goblin Wood" (1947) is the crown jewel of Carr's short fiction and together with Joseph Commings' "No Bones for Davy Jones" (1953), Robert Arthur's "The Glass Bridge" (1957) and Arthur Porges' "No Killer Has Wings" (1960) among the best dozen short impossible crime stories ever written. "The Dead Sleep Lightly" (1943) presents the detective story as a ghost yarn and demonstrates Carr easily could have been the next M.R. James as well as having one of my favorite lines in all of detective fiction. "Blind Man's Hood" (1937), "Persons or Things Unknown" (1938) and "Cabin B-13" (1943) have similar qualities (ghostly crimes), but for today, I decided to reread one of his most well-known, often reprinted short stories.

"The Silver Curtain" (published as by "Carter Dickson") was first printed in the August, 1939, issue of The Strand and reprinted in The Department of Queer Complaints (1940), Merrivale, March and Murder (1991) and The Mammoth Book of Locked Room Mysteries and Impossible Crimes, which may have been its most important appearance to date – likely introducing the then long out-of-print Carr to many readers at the time. Our current reprint renaissance was still in its infancy in the early 2000s and it was not until recently Carr began to receive the renewed attention he so much deserves.

"The Silver Curtain" differs from the stories mentioned above as it has none of the trappings of the ghost story, or even a hint of the supernatural, but an ordinary crime that's misunderstood. And the dark, rainy backdrop gives the crime an almost unearthly quality.

The story begins in a French casino where a young man, Jerry Winton, is having a run of bad luck at the tables, which left him practically cleaned out, but gets an unexpected offer from a man who won a pretty packet at the table. A sleek, oily-faced man, Ferdie Davos, asks if Jerry is interested in making ten thousand francs. Only thing Jerry has to do is go "see a doctor" to get a nerve tonic. Jerry gets an address and instructions to be there in about an hour. When Jerry sets out on his shady assignment, he suddenly notices Davos walking along the dim, rainy street and entering a cul-de-sac with two of its three sides being tall, blank brick walls and the third side formed a tall, flat house – "all of whose windows were closely shuttered." There was nowhere to go, or hide, but in "the second's space of time" it took for Jerry to glance back at "the figure of a policeman some distance away," someone killed Davos. A dying Davos is lying on the pavement with a heavy knife in the back of his neck and clutching a well-filled wallet. Even worse, Davos had been all alone in "an empty cul-de-sac as bare as a biscuit-box" and the position of the knife convinces the policeman Jerry killed the man during an attempt to rob him.

So the situation doesn't look very good for our young hero. Luckily, Colonel March, of Scotland Yard, happened to be in France to help investigate "a certain form of activity" that has "became intolerable both to the French and English authorities," which dovetailed with the impossible murder in the cul-de-sac. Colonel March more or less acts as deus ex machina as he doesn't enter the story until the last few pages. What he does is pulling out all of the relevant clues from his coat pockets, "with the air of a conjurer," which spells out a very clever and satisfying explanation to the seemingly impossible. A solution clearly showing just how much of an influence G.K. Chesterton was on Carr's work and perhaps it would have been better had Dr. Gideon Fell been the detective. But other than that, I've no complaints.

"The Silver Curtain" is a vintage, snack-size impossible crime story and can be counted among Carr's half-dozen best short stories. Recommended!