The Clue of the Green Candle (1938) by Gerald Verner

The Clue of the Green Candle (1938) is Gerald Verner's ninth pulp-style detective novel starring his dramatist and amateur criminologist, Trevor Lowe, who's asked to discreetly investigate the strange disappearance of a celebrated mystery novelist, Roger Tempest – considered to be "one of the most ingenious of our detective writers." A mystery writer with "a most amazing capacity for evolving ingenious swindles" and "methods of robbery," but the opening lines of the story has him dictating a locked room mystery for Fiction Weekly to his secretary, Isabel Warren. So we already know he must have been a good guy! :) 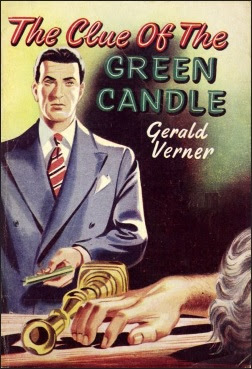 Several social obligations puts their work on hold until the next morning. Firstly, Roger expects a visit from his much younger, easy-going brother, Richard, who's "an inveterate gambler" and "a well-known figure on the racecourse." Roger quickly found out that "supplying his brother with money was rather like pouring water into a drain," which is why he tells Richard that he's not getting another penny until he turns his life around. This time, he means it!

After his brotherly sermon, Roger is driven to the home of his friends, the Sheldons, to have dinner, but, on his return home, he simply vanishes without a trace and nobody hears anything from him for over a week. Naturally, the publishers are getting a little restive with the non-delivery of his manuscripts and new contracts not getting signed.

So they bring in Trevor Lowe to start looking for him and, before too long, the bestselling author is found in a ditch with a stubby, unshaven face and dirty, bloodstained evening clothes with an ominous, narrow slit surrounded by a reddish brown stain in the shirtfront – ankles and wrists shows signs he had been tied up for some time. Suggesting he had been kept a prisoner somewhere until he no longer was of any use to his murderer. Just like "a bit out of one of his own books."

The Clue of the Green Candle is a pure, pulp-style detective novel, but you wouldn't be able to tell from its opening chapters and showed there was a proper, Golden Age-style mystery writer was hidden inside Verner. I guess the biggest stumbling block were his deadlines, because as the story progresses, you can actually feel his deadline coming closer as Verner's writing and plotting becomes more slipshod and pulpy. A change that becomes quickly apparent after an early, relevant inquest that adds new information instead of chewing cud (rejoice, JJ!) and ends with an arrest.

Regrettably, Verner immediately disposes of this new development and doesn't really come into play until the last chapters. This is also the point where the plot becomes a little more disjointed.

After the inquest, Lowe is asked to investigate the death of an old acquaintance, Sir Horace Gladwin, who was in "the best of health" when he went to bed and apparently died during the night of acute pneumonia, which is strange without any previous symptoms – reason why his doctor refuses to sign a death certificate. Lowe finds two important clues, "three dead flies and a green candle that has a queer smell," which convinces him "a very cunning crime" has been committed. But even he's surprised when he finds a tangible connection between the murders of Roger Tempest and Sir Horace.

On a sidenote, the murder of Sir Horace earned The Clue of the Green Candle a place in Robert Adey's Locked Room Murders (1991), but it's not a locked room or impossible crime in any shape or form. The bedroom door wasn't even locked! You have been warned.

So, as the story moves towards the halfway mark, it begins to enter pulp territory with its disjointed storytelling and the scheming presence of "a man with a dark overcoat and a wide-brimmed hat" who does everything in his power to get his hands on a sheaf of papers. Nothing is off the table. Arson, intimidation, violence, kidnapping and even murder comes the way of everyone who crosses path with this shadowy individual. There's a good, spirited attempt to misdirect the reader, but spotting the murderer is not too difficult a task and the only remarkable feature of the solution is the motive for murdering Roger Tempest, which is an uncut, diamond-in-the-rough of an idea – which deserved a better detective novel. Yeah, that's pretty much all that can be said about The Clue of the Green Candle.

The Clue of the Green Candle is a short, fast and readable pulp novel with a few good ideas and a strong opening, full of promise, but the convoluted, sometimes confusing, second half killed any interest that the opening chapters had setup. For example, what exactly was the point of the intermezzo in which Lowe drives a swindler (unconnected to the story) to suicide? So, no, The Clue of the Green Candle is not in the same league as Verner's more accomplished novels, like They Walk in Darkness (1947), Noose for a Lady (1952) and Sorcerer's House (1956), but still makes for fun, uncomplicated hour or two of reading.