Hillel Black was an author, editor and publisher who passed away in 2016, aged 86, but, curiously, not one of the obituaries online makes any mention of the short-lived detective series he wrote as "John B. Ethan" at the tail-end of the genre's Golden Age – comprising of three novels published in 1959 and 1960. I've only been able to track down a scant few sites that identify Black as Ethan with an entry in Allen J. Hubbin's Crime Fiction IV: Part 8 being the most reliable one. Everything seems to check out. 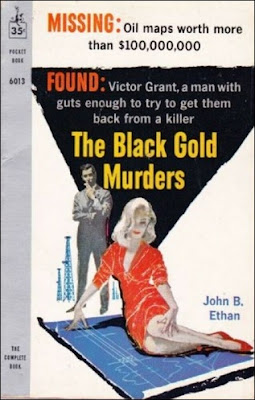 So why did Black (or his estate?) ignored his brief career as a mystery writer? Were they badly written? A commercial failure? Or did the image of a paperback writer of crime stories with tough guys and sexy dames strike a jarring note with his much more respectable career as a literary editor?

ThrillingDetective.Com has a page for Ethan's series-detective, Victor Grant, which describes the series as specializing in "catching business thieves and resolving other samples of corporate skullduggery" with the caveat that it's "a low-energy three-book series." An interesting comment considering that two of three novels were jotted down by Robert Adey in Locked Room Murders (1991). So this begs the question, did Black/Ethan do something as unbecoming as writing traditional, plot-driven detective novels and tried to parade them around as thrilling, action-packed tough guys novels? He wouldn't have been the only writer at the time who tried to do that. Fortunately, I stumbled across a dirt cheap copy of his first novel and it's one of the two titles listed in Locked Room Murders.

The Black Gold Murder (1959) introduces the reader to the high-prized management consultant and confidential business investigator, Victor Grant, who runs the one-man operation Victor Grant Associates with a staff consisting of a research assistant and four legman on retainer – each stationed in a different part of the country. There's also a beautiful, brainy blonde secretary, Jan, who moonlights as Grant's wife. Grant explains to the reader that he makes his living by exposing the great myth of the American businessman as "the shrewdest horse trader in the world" when the American businessman is "the biggest dope when it comes to running his own business," which is where Grant enters the picture.

Grant's caseload is as varied as finding out why a $300,000,000 airplane manufacturing contract has fallen behind schedule to exposing trusted, long-time, but disgruntled, employees who were "dipping into the boss's cash register or stealing his goods." So these first few pages were obviously meant as an introduction to Victor Grant and the arrival of a new client provides him with an opportunity to showcase his detective skills and business prowess.

Albert Blaugh became one of the most successful businessmen in the United States as the president of the Oklahoma Oil Corporation, a multi-billion dollar company, who came to Grant with a potential reputation destroying problem. Grant suspects Blaugh is holding something back and had to demonstrate he, too, "played in the same league" as the oil tycoon before getting the full, unredacted story.

One of his long-time employees, Tom Hanssen, who's office is in Amarillo, Texas, was in the process of leasing and buying potentially the most valuable land in the state with "a huge, untapped oil field" underneath it – one hundred million dollars' worth of black gold. Hanssen has suddenly disappeared without a trace and his disappearance coincides with the theft of the invaluable oil maps. These oil maps were kept in "a special locked room," a map room, which has restricted access and only a few top executives and engineers know the combination to the safe. As an extra security measure, Blaugh had a hidden photo camera installed with a timing mechanism, to automatically turn on-and off, that's triggered by two photoelectric cells next to the safe. So everyone who opens the safe after office hours will be secretly photographed. But the charts were taken from the locked safe in the secure map room. And nobody appeared on the film! 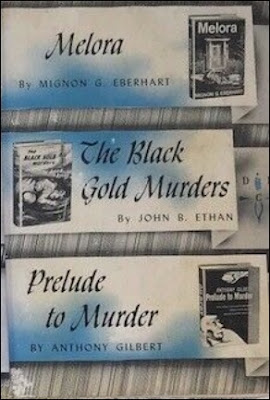 Grants accepts the assignment and embarks on his client's private plane to Texas, but they have to crash land and Grant is very suspicious of this accident. Unfortunately, this brief scene practically undoes the whole image of Grant as a high-prized corporate detective/trouble shooter from the opening pages. Grant suspects somebody was trying to buy him "a one-way passage in a six-foot box," but only his wife, Blaugh and the two pilots knew about the secret, last-minute trip to Texas. But he never asks himself the obvious question: who was the intended target? Grant brushes the incident aside as an accident and it's not until the end that the murderer confirms the plane was sabotaged with the intention to kill Blaugh.

It's these kind of little details betraying The Black Gold Murders as a second-string mystery. Another thing that bugged me is that the ending mentioned sending someone to "Aruba in Curaçao," which are two separate islands in the Dutch Antilles.

Anyway, what follows is, what I imagine to be, pretty standard fare for a tough guy novel from this period with Grant having numerous physical altercations, usually at gunpoint, but also has to jostle with an ex-jailbird and the beautiful, spiteful daughter of his client, Ann Blaugh – who's a hunter and "the animals she hunts are men." Not to mention the employees of Oklahoma Oil. There are two murders along the way, one of them clumsily disguised as suicide, which hands Grant his only opportunity to play a proper detective and deduces it was murder based on the dregs in a coffee cup. Otherwise, there are only two things that makes this bland detective story standout.

Blaugh gives Grant a VIP tour of the map room and the chapter includes one of the strip maps, which came with a short lecture on oil prospecting. I didn't expect a map to be included in this novel, but they're always a welcome addition to any detective novel or short story. Secondly, Grant staged the final act of the case during a crucial meeting of the board of directors.

Regrettably, the identity of the murderer and motive were uninspired nor do you have to pick your jaw up from the floor when you learn how the maps were stolen. There was a clever piece with a mix-up during the thefts, but nothing truly inspired or ingenious. The Black Gold Murders reminded me in that regard of Curtiss T. Gardner's Bones Don't Lie (1946), which introduced the first big business detective on record and used a steel manufacturing plant as a fascinating backdrop, but the unremarkable plot made it nothing more than a curiosity. I feel the same about The Black Gold Murders.

The Black Gold Murders is light, passable stuff that could have done so much more with its original premise, but it didn't, which makes it another curiosity recommendable only to fanatical collectors and readers of locked room mysteries.