Last year, I reviewed W.H. van Eemlandt's tightly-plotted Kogels bij het dessert (Dessert with Bullets, 1954), a classically-styled Dutch locked room mystery, of sorts, with all the technical expertise of Freeman Wills Crofts and John Rhode – resulting in a novel that can be measured against its Anglo-American counterparts. Something that's always gratifying to find in a country that has been everything but fertile ground for the traditional detective story. Naturally, it was an invitation to return to Van Eemlandt sooner rather than later. So here we are! 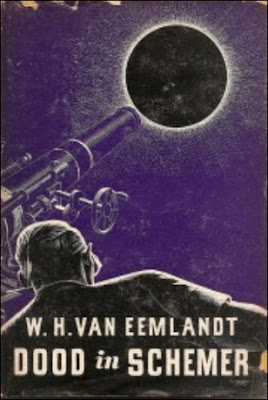 One novel that has always fascinated me is the fifth title in the Commissioner Arend van Houthem series, Dood in schemer (Death in Half-Light, 1954), which has a fascinating premise. A murder at the moment surpême of a scientific observation of a solar eclipse on the summit of a mountain in the Fiji Islands.

Death in Half-Light is structured very differently from Dessert with Bullets and uses the first half of the book to introduce the characters, setting the scene and building towards the one of the most inevitable murders in all of detective fiction.

The spider in the web of Death in Half-Light is a professor of astrophysics, Doctor Arthur Suringa, who comes from an old, moneyed Amsterdam family that produced one or two notable figures every generation. Suringa family tree has its branches adorned with "distinguished generals, well-known scholars, famous scholars and writers" as well as "wealthy regents and merchants," but there were also some notable eccentrics – like mystics, zealots and crackpots. Dr. Arthur Suringa can be placed somewhere in the middle of his illustrious and eccentric ancestors. A largely absent, overworked father and an over indulgent mother turned him into a cold, egocentric and treacherous man with a devil of temper. Nonetheless, Suringa made his name as a promising physicist when he was only 28-years-old and thirty years later, he's patiently preparing the crowning achievement on his life work.

Suringa had to swallow his pride and went, cap in hand, to people he considered beneath contempt to bring together the funds needed to finance a scientific expedition to Koro Island. There he wants to use the latest, cutting edge scientific and technical marvels of the 1950s to observe and document the sun's corona during a full, 316-seconds long eclipse. The results of the observation could have "a long-lasting impact on the cosmogony of the future." So, with the money in the bank, he gathered a crack team of scientists, technicians and other people who are needed for their eclipse expedition.

Doctor Gerard Eggeling Hoves, obviously despised by Suringa, but someone who's still has his use to him "as a tool in the hand of a master." Doctor Hélène Daling is a beautiful young scientist with a growing international reputation as a spectroscopic analyst who's engaged to the engineer of the expedition, Karel Brandma, which adds another layer of tension to the expedition – as Suringa showers her with unwanted attention and innuendos. Doctor engineer Merelaer (no first name given) is one of the foremost experts in the world on astro-photography and is responsible for the photo-technical aspect of the expedition, but his death mask-like face and wooden, automatronic movements unnerves Suringa. Captain Leopoldsen is a retired administrative officer of the former KNIL (Dutch colonial army) who's in charge of the accounts and bookkeeping, but some "unclear, unresolved irregularities" placed a smudge on his record. There are a few last-minute additions to the party. Ann Narracott is an American astronomer who joined the expedition in San Francisco and Suringa's nephew, Rolf Teding, who's a promising scientist in his own right. Lastly, there's a newspaper reporter, Hidde Haima, who's there under the guise of free and laudatory publicity, but in actuality, he's there as a secretive peacekeeper per request of his long-time friend, Brandsma. 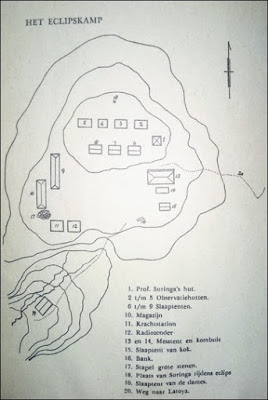 Commissioner Van Houthem briefly appears in the first half of the story when he receives an anonymous letter, posted to his home address, promising a perfect murder that has been planned to the second with "scientific certainty."

After this foreshadowing, the story moves to Koro Island where the expedition members setup camp and begin the long, arduous months of preparing and rehearsing their observation down to the last millisecond. Something that's not always easy when someone, like Suringa, is the head of the expedition and the long months don't pass without incidents. Most notably, Suringa nearly gets the whole expedition exiled from the island when he blundered into a holy place without the proper preparations or ceremony, which disturbed "the good spirit of Koro" who lives where they want to setup camp. Some unorthodox diplomacy was needed to put things right as Brandsma tells the natives that the sun will be attacked by evil spirits and the mountain top is the best place to successfully battle "the enemies of the sun."

When the eclipse finally came and went, the scientists got their data that will forever etch their names in their respective fields and the natives got to watch "a group of Westerns delivering the sun from the clutches of her captors," but the man of the hour sat silently slumped against the base of his telescope – a small, poison-smeared thorn sticking in his neck! Natives weren't anywhere close enough to the camp to have used a blowpipe and an analysis of the poison proves it was not indigenous to the island. So that means one of the observers must have fired, or stuck, the poisoned thorn into Suringa's neck, but they all have practically airtight alibis. Suringa was killed in a wide, open space during the most important phase of the eclipse and every fraction of a second was analyzed, which means that none of the suspects had even a second to spare to commit a murder. This makes it a borderline impossible crime and one of the character calls the murder a physical impossibility.

The local authorities, represented by the British Ashton (Good chap! Very tolerant of my compatriots), were unable to find a satisfactory answer to the death of Suringa and it takes some time before the file ends up Van Houthem's desk. Regrettable, the quality of the storytelling drops in the second half like a weighted down canal corpse and the explanation to the fascinatingly posed, quasi-impossible murder turned out to be a damp squib. 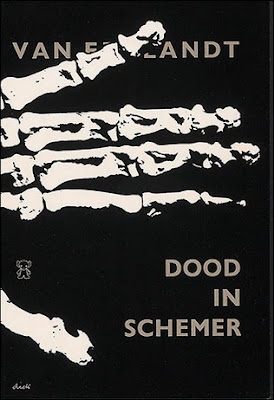 Firstly, the second half is waist deep in dragging-the-marshes territory with Van Houthem acting as an armchair detective as he smokes his pipe, reads documents and questions the expedition members, which largely goes over ground that has already been covered and can best be described as sifting everything that's known, or said, about the case through a sieve. This would have been perfectly acceptable had the clueing not been so ramshackle, or that you can only make an educated guess about the motive, but the worst part is how easy you can identify the murderer and that there was nothing clever, or inspired, about the alibi-trick and plot. It turned out to be the most simplistic answer that had already been alluded to earlier on the story.

I've praised detective writers in the past for getting more out of plot than they initially put into it. Such as Rupert Penny's Policeman's Evidence (1938), but Van Eemlandt did the complete opposite with Death in Half-Light. Van Eemlandt front loaded Death in Half-Light with potential gold and emerged with a few pieces of scrap metal, like reverse alchemy, which was really surprising considering the whole setup and was already vigorously padding myself on the back – assuming I seen through the elaborate and dastardly deception. I figured Suringa wrote the anonymous letter to Van Houthem and the story made it abundantly clear that the professor was not above hatching a nefarious scheme, but one of the expedition members turned the tables on him. There was one alibi, in particular, which left some room for a little trick that would allow this person the time to kill Suringa while everyone else were deeply concentrated on their tasks. Well, I was right about the murderer, but the trickery, or lack thereof, was deeply disappointing. Van Eemlandt also threw in a bit of mental instability to solve the problem that the Dutch police have no official standing in the case. Van Houthem can only identify the murderer and very little else.

So, yeah, I really wanted to like Death in Half-Light, which has good first half with a fascinating, well-done premise, but the second half was repetitive with a poorly clued and disappointing solution. What a step down from the clever, tightly-plotted Dessert with Bullets. But it show that the quality of the Dutch detective story, even when confined to a single writer, is all over the place. I'll stubbornly carry on with Van Eemlandt and already have an eye Code duizendpoot (The Centipede Code, 1955), which probably going to be a stupid gamble as its a Cold War novel with number stations and an on-air murder during a radio-play. Yes, the stove is hot. And, yet, I must touch it.

Speaking of touching hot stoves, my next read is going to be another gamble with an obscure, long out-of-print Dutch detective novel that can be either great, average or a complete disappointment. Why do it? The novel in question has a theme making too perfect not to use as a followup to Death in Half-Light. Fingers crossed!