Back in January, I took a second look at "Rupert Penny," penname of E.B.C. Thornett, whose promising-sounding Sealed Room Murder (1941) was such an ordeal to read that it put me off his work for nearly a decade, but "JJ," of The Invisible Event, kept singing his praises – culminating with "Policeman's Lot – Ranking the Edward Beale Novels of Rupert Penny." Policeman in Armour (1937) came in third on that list as Penny at his "most presentable" with a plot that unrolls with "seamless efficiency." Shockingly, Jim was right and Penny redeemed.

So, hoping lightening will strike twice, I consulted the list to help pick my third Chief Inspector Beale novel, but decided not to go with his #1, The Lucky Policeman (1938), because that would be too much like playing Russian roulette. It's Jim we're talking about. I played it save and picked one of Penny's two (not three) locked room mysteries, Policeman's Evidence (1938), which is #5 on the list, but Jim named it his personal favorite. Let's see how this penny stacks up. 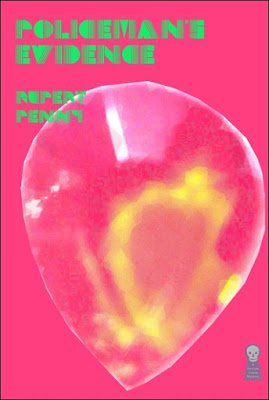 Policeman's Evidence marks fifth appearance of Chief Inspector Edward Beale, who narrates the second-half of the book, but the first portion of the story is told by his friend, Tony Purdon.

Purdon is staying at the Gloucestershire country home of an acquaintance, Major Francis Adair, who's a "crack experts on codes and ciphers" and "a civilized bully," which are two qualities that are relevant to what's to come. Eighteen months ago, Adair bought an old leather-bound volume written in a kind of shorthand he hadn't seen before and was determined to decode, and translate, the private shorthand as a personal challenge, but the text revealed the history of the Mauberley family – particular of its last surviving member, Jasper Mauberley. A "cantankerous cripple" who lived as a recluse until he died in 1706 without leaving a trace behind of his purported wealth. So everyone assumed at the time Jasper had been poor instead of mean-spirited, but the shorthand diary proposes that "the clue to the whole matter should be found in the panelled room" near the end of the Long Gallery. Adair has plenty of money, a strain of avarice and enough mule's logic to purchase Mauberley Grange. Setting the stage for an all out treasure hunt!

When he arrives at Mauberley Grange, Purdon finds a curiously and mixed household of family members, guests and employees. Adair is a widower with a daughter, Tilly, who's "ugly as Anubis" and is treated abysmally by everyone. He also has an adopted daughter, Lina Hipple, who he treats as if she was his real daughter and the apple of his eye. Hinkson is Adair's personal secretary and had been engaged on account of his own knowledge of ciphers, but only after his predecessor, Warner, got sacked for theft. Apparently, Warner now bears a grudge, which is why Adair also hired a gangland-type bodyguard, Buck. Roger Montague is another "queer bird" and an old friend of Adair who has various ailments and bored, cynical demeanor. Finally, there a various servants such as the cook, chauffeur-gardener and the butler.

So there's enough animosity and greed bubbling underneath the surface of Adair's household without a treasure hunt among people who either hate his guts or need money. Something that becomes only too apparent when the long hidden clue is found with "a token of the real treasure," an unset, pea-sized ruby, and another homemade shorthand cipher. The ruby disappears, perhaps stolen, while an intruder attacks the butler. Purdon asks his hosts to extend an invitation to his friend. 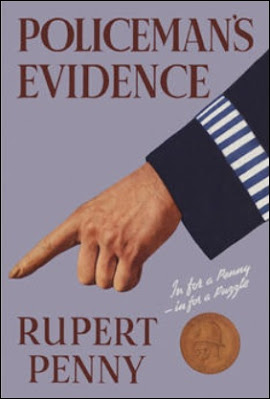 Chief Inspector Edward Beale barely crossed the threshold of Mauberley Grange or the butler announces he was bringing Adair his customary evening sandwiches and hot milk, but he doesn't answer his knocking and it becomes clear they have to break open the door, which had been locked on the inside and double bolted – top and bottom. And when the door crashed open, Beale found Adair's body slumped in a chair with an automatic pistol lying on the floor. The window was covered with a makeshift, two-part wooden partition locked on the inside with a padlock, which can be fastened only with a key that was found inside Adair's pocket. One of the clearest cases of suicide, but Beale wants to be sure and this poses a problem. Penny came up with an original solution to Beale's quandary.

Since the case looks undeniably like a suicide, Beale needs to find authoritative grounds to stick around and not give people a reason to ask why he's still hanging around. So he makes a few phone calls and several hours later a telegram arrives to inform them that the place is placed in a two week quarantine, because a suspect Beale had interviewed was diagnosed with hospital smallpox. The gates into the road were padlocked and supplies were tossed over it. But, hey, who knew that rambling, badly kept 300-year-old place so closely resembled a house of the future ready for that 2020 lifestyle.

Anyway, the quarantine gives Beale all the room and time to carefully examine the supposed suicide, which comes with some quasi-self awareness as locked room mystery. There's the obligatory reference to John Dickson Carr's Locked Room Lecture from The Hollow Man (1935) with a promising line that "nowadays nobody dares write a sealed-room mystery" unless he's found, or thinks he has, "a new method for eventually unsealing his room" – tailed by a tabulation of all the facts and a challenge to the reader. So, far, so good, but it's the solution that left me in two minds about Policeman's Evidence. If you strip the story down to its bare essence, you're left with the pulpy, second-string mystery I associate with John Russell Fearn and Gerald Verner. Something that's particular true for who's behind the murder, but the locked room-trick itself is also nothing more than a redressing of an age-old trick. What prevented me from either hating it or having to write a lukewarm review?

Penny did nothing noteworthy with the treasure hunt, subsequent murder or the locked room puzzle, but what he did with it, he did very well with some solid detective work and good piece of misdirection that briefly fooled me. Even the locked room-trick, while done before, was played perfectly. Penny made lemonade out of lemons with Policeman's Evidence and the end product, somehow, managed to be better than ingredients used to make it. I don't know how he did it, but he did and that says something about his talents as a plotter and writer. So, yeah, I kind of misjudged him based on a single bad penny. And, perhaps, it's time to excavate The Talkative Policeman (1936) from the subterranean caverns of Mt. To-be-Read.

Yes, Jim was right again, but, in order to keep up appearances, I've to vehemently disagree with his five-star rating of the book. Five stars is preposterous! A solid, three-star rating is much fairer reflection of a well-handled plot that, perhaps, promised more than it eventually delivered without losing the reader at the finish line.