Herbert Brean's The Clock Strikes Thirteen (1954) is the fourth and final novel starring Reynold Frame, a freelance writer, photographer and amateur detective, which began life as a short story in the June, 1952, issue Cosmopolitan – expanded two years later as a suspenseful mystery. A thriller with a detective plot that has one of the best and most memorable take on Anthony Berkeley's Panic Party (1934) and Agatha Christie's And Then There Were None (1939).

I've wanted to take a second look at The Clock Strikes Thirteen ever since rereading Hardly a Man is Now Alive (1950), but then 2020 happened and decided to put it aside. You see, the story takes place on a desolate, rocky island where germs and viruses are being weaponized. 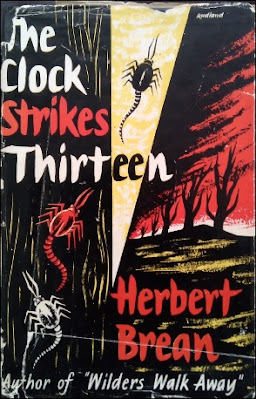 So it's not merely the presence of a murderer that puts the small, isolated group on edge, but also a splash of weaponized bacteria and viruses let loose on the island. Not exactly a comfort read. Rupert Penny's Policeman's Evidence (1938) convinced me it would be a waste not to use a quarantine-style detective novel to close out 2020. Go hoard some rolls of toilet paper and hand sanitizer, because we're about to enter a viral hotspot.

The Clock Strikes Thirteen begins with a midnight phone call to freelance photographer, Reynold Frame, who's to take the place of a Russian-born photographer on a secret assignment to Kilgore Island, Maine – twenty-four miles out in the Atlantic. North Wayland is the current owner of the island who used to be the "most skilled brain surgeon in the world," but became a changed man when he lost his wife and children in the war. Wayland became a bacteriologist and dedicated his life to researching the kind of science "doing its darnedest to kill off man in wholesale lots," namely biological warfare, which is why he located to the remote island and erected a private laboratory. Wayland apparently has developed a biological weapon capable of "wipe out an entire country" and "conquer the rest of the world." So, naturally, the U.S. military is deeply involved in the project and the reason why the original photographer failed to get security clearance.

Reynold Frame and Leon Exeter, a writer for Picture magazine, voyage to Kilgore Island with Major Harry Geddes and Captain Jonas Kilgore, who was born and raised on the island, but now refuses to stay there. Not without reason. Kilgore Island resembles "the other side of the moon." A bleak, rocky protrusion in the sea crowned with a clump of dead, prickly trees. Wayland lives and works there with his assistants, Val Chesnikoff, Susy Smith, Clare Quarles and Dr. Mike Inglehart – who's the chief assistant in charge. Finally, there's an overworked cook and her slow-witted son, Tom. And it doesn't take very long before things go south.

Wayland shows Frame around the laboratory and he wants to take a photograph of the bacteriologist holding a test tube, but Wayland corrects him that they chiefly use Petri dishes. So he goes to get some samples, but when doesn't return, Frame begins to look for him and discovers his body on the floor of the barn. Slashed to death with a scalpel and covered with fragments of broken glass with "a gelatinous substance" stuck to the shards. What has been spilled in there is agar, which is used for growing cultures. If there were bacteria cultures in it, they're now all over the place. That's very bad news, if they contained Wayland's secret weapon. But it gets worse!

Since they've no idea what the incubation periods is, they have everything from twelve hours to two, or three, days before they know what they're up against. But it gets even worse. North's taste for fresh food means that there's no canned food on the island and they can't eat any uncovered food, due to contamination, which means they now have to survive on water and some eggs until Old Jonas returns – ensuring a few days of extreme dieting. On top of that, Tom disappeared around the time of murder and Frame's lack of motive finds him a captive of Major Geddes. Oh, and there's no radio to contact the mainland. Can any more go wrong for Frame? The answer is yes. Yes, it can. 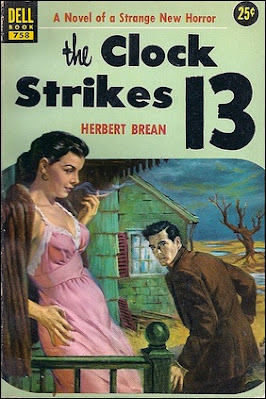 As noted above, The Clock Strikes Thirteen is an expanded short story and the core of the plot, who, why and how, is relatively simple and straightforward. Something you would expect from a short, 10-page story with the highlight being a brief lecture on "the essence of a perfect alibi." During this short lecture, Frame mentions the main principles of the alibi-trick (booby traps, concealed weapons, manipulated clocks and the unconsciously coached witness) and demolishes everyone's alibi by demonstrating that "the really perfect alibi" is "the one that is so natural and ordinary that it is never even suspected." Sadly, this lecture covers only the last two, or three, pages of Chapter 9, but should still delight fans of Christopher Bush and Freeman Wills Crofts.

So, as far as the plot is concerned, The Clock Strikes Thirteen is decent enough, but compared to Wilders Walk Away (1948), Hardly A Man is Now Alive and The Traces of Brillhart (1960), is Brean's thinnest detective novel. The Clock Strikes Thirteen is mainly carried by its storytelling, setting and a truly original premise, which has to my knowledge never been done before or since.

When I read it for the first time, the story struck me as a good, old-fashioned piece of detective fiction spiced with some cold war paranoia, but, having lived through 2020, their situation became much more relatable – although nobody ever mentioned toilet paper. Neither is there the same level of mental breakdown among the characters as in Berkeley's Panic Party, Christie's And Then There Were None or Robin Forsythe's Murder on Paradise Island (1937), which is replaced with the gloom of a possible death sentence hanging over their heads and a growing, gnawling hunger. This situation makes one scene, in particular, very effective when Frame finds himself in the role of "someone in a story from the Arabian Nights" and had "rubbed a magic lamp." Only for the mention of germs for reality to come crashing down all around him. An absurd, but good, intermezzo reminiscent of those Baghdad-on-the-Thames scenes in John Dickson Carr.

The Clock Strikes Thirteen is, plot-wise, not quite as good as Brean's other detective novels, but the writing and its suspenseful take on the closed-circle of suspects/isolated island situation helped elevate the story to something very much worth your time. Even more so if you like these type of mysteries centering on a small, isolated cast of characters. Brean was great even when playing with a weak hand.

So, in closing, I want to wish everyone of you a happy new year and hope 2021 will treat us all better than 2020 has, but if 2021 decides to outdo its older brother, I'll be seeing some of you in the trenches. We will identify to each other with the phrase, "you have been to Afghanistan, I perceive."