I'm an idiot and chronologically challenged! Back in 2016, I read Paul Doherty's Bloodstone (2011), a book reviving the Brother Athelstan series, which had lain dormant since The House of Shadows (2003) and Doherty began to work prodigiously towards the Great Uprising of 1381 – the major story-arc of the series. I told in my 2018 review of The Straw Men (2013) that it was my intention to read these new novels in chronological order, but, as you probably noticed, the previous review was of The Herald of Hell (2015). There are two novels between The Straw Men and The Herald of Hell, Candle Flame (2014) and The Book of Fires (2015). Somehow, I had already crossed them off the list in my mind. Why? Because I'm an idiot, that's why. You can jeer and mock me in the comments. 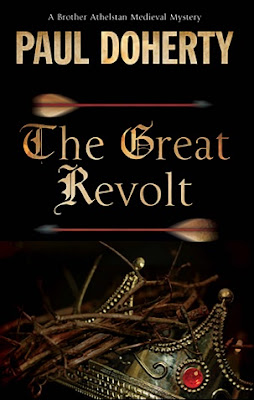 The Great Revolt (2016) is the sixteenth title in the Sorrowful Mysteries of Brother Athelstan series, set in June, 1831, when the Great Community of the Realm and the Upright Men began their bloody purge of London.

Brother Athelstan is at the mother house of the Dominican order, Blackfriars, where he had been summoned to provide assistance to a papal envoy. The boy-king, Richard II, had returned from a pilgrimage to the tomb of his great-grand father, Edward II, with the conviction his ancestor was a saint and a royal martyr – "a true martyr king" like "other saintly monarchs" in "the misty history of the English crown." So he petitioned "the Holy Father for the formal opening of the process for the beatification and canonisation of Edward II" and since Urban VI has a rival pope, Clement VII, residing in Avignon, which makes it desirable for Rome not to alienate the English crown. Athelstan is asked to help gather evidence in favor of canonization of Edward II, but that's easier said than done. Edward II was a divisive monarch with evidence suggesting the deposed king had been freed and fled to the continent, which would be embarrassing for both King Richard and the Pope. And are the 54-year-old secrets worth keeping to the point of murder?

One of the papal envoys, Brother Alberic, collected evidence against the dead king's reputation in his role as advocatus diaboli (devil's advocate), but when the story open, the door to his room is being battered down. A room with only a very narrow, lancet window and a heavy, elmwood door securely locked and bolted from within, but Alberic had been "brutally stabbed" with "an ancient-looking dagger" nobody recognizes. Even stranger is that Alberic was a former soldier, still young and vigorous, but there's no sign or "even a scratch of any struggle or challenge." Alberic is not the last to die violently on consecrated ground of Blackfriars.

You shouldn't expect too much from the locked room-trick, because it's based on a simple idea that has been explored before, but it was put to good use here and the reason why there wasn't any signs of a struggle was genuinely clever and a splendid hint to the identity of the elusive assassin. Just like Steve, the Puzzle Doctor, something "I haven't seen before." This portion of the plot is basically a historical mystery within a historical mystery, linking the tumultuous events of 1327 and 1381, which proved to be tapestry of long-held, treasured secrets and bloody murder – set against a background resembling the end of days. Brother Athelstan and Sir John Cranston, Lord High Coroner of London, move back and forth between Blackfriars and London.

The footmen of the Upright Men, the Earthworms, were out in full force and directed the grisly
executions and feel slightly guilty for snickering at the lively crowd heckling the unsteady, piss drunk executioners gruesomely botching a beheading as "butter-fingered fumblers." How can you not love the English? But as the revolt drew on, the bloodshed was used to settle old scores and attack the vulnerable as the streets were littered with corpses knifed, garroted or dangling from ropes. So wherever they went there were torn down walls, shredded gates and fences, burning houses and "summary execution at different places along the way." Everywhere they passed where "scaffolds, gibbets and gallows festooned with corpses" or "decorated with bloody body parts and severed heads." Even by Doherty's own standards, The Great Revolt has an incredibly stacked bodycount.

But while they're deep into enemy territory, surrounded by 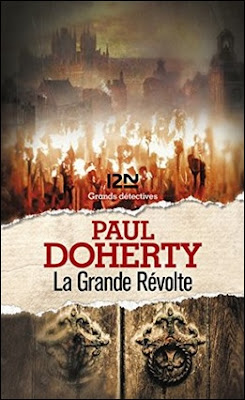 anarchy and murder, Athelstan and Sir John have their concerns. Sir John wants to be with King Richard when the time comes to meet the rebels and their mysterious leader, Wat Tyler, while Athelstan is deeply concerned about his parishioners. Most of them were taken prisoner and spirited away before the violence erupted, but one of them, Pernel the Fleming, was drowned and her house torched. She may have had a connection to one of the people currently sheltering at Blackfriars. Athelstan also worried about his non-human friends such as his old horse and that wily, one-eyed tomcat, Bonaventure, who had been "his constant dining companion" and credited the cat with "more wit and sense than all his parishioners put together."

So, needless to say, The Great Revolt is an eventful novel in which Doherty took some creative liberties in tying together his fictitious plot-threads with the historical accounts of the Peasants' Revolt of 1381 and the death of Edward II, which he acknowledged in his Author's Note. But, to quote Doherty, historical novels "often reflect a reality based firmly on fact rather than fiction." I think The Great Revolt succeeded in being both an engrossing historical novel and a well done detective story. Definitely recommended!