Fear and Trembling (1936) by Brian Flynn

Brian Flynn's Fear and Trembling (1936) is the nineteenth novel of the Anthony Bathurst mysteries and, like my previous read in the series, The Horn (1934), begins with an unaccountable disappearance and full with Sherlockian allusions, but Flynn has a phenomenal trick up its sleeve – a trick worthy of that Golden Decade of the Golden Age. The way in which this trick was executed proved Anthony Boucher was right that the rules of the detective story can only be broken, twisted or subverted by people who understand and respect them in the first place. 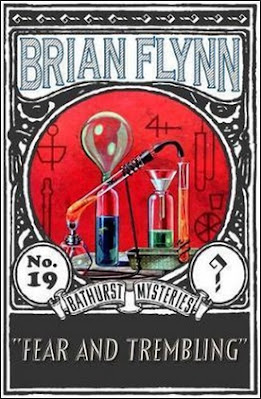 David Somerset is an analytical chemist with his own manufacturing company, Somerset and Sons, which he runs together with his twin sons, Geoffrey and Gerald.

A respected chemist with a respectable family business, but the start of the story finds David Somerset en route to a secretive meeting with a syndicate in the smoke-room of the Golden Lion in East Brutton, Gloucestershire. The syndicate is a "strange company" of five foreign-looking men dressed in dinner jackets with a white gardenia and they're prepared to part with "a truly noble sum" in exchange for something Somerset possesses. Somerset believes what he has to offer is worth ten times as much ("one million pounds paid in notes") and the negotiations reaches a deadlock, which then heats up with threats and "stupid talk of murder." And the chapter ends with Somerset bending his head to listen to the syndicate's revised terms.

The second chapter brings Gerald Somerset to the office of Sir Austin Kemble, Commissioner of Police, to tell that both his father and brother have disappeared on the same day. On the morning of March 12, Somerset had issued instructions to his sons not to come to the office until midday, but when they arrived, they found that their father had left early in the morning and had not returned – he never did. That same night, Geoffrey didn't come home. Vanishing as completely as his father. So what's going on?

Anthony Bathurst is only too happy to give Sir Austin and Gerald a helping hand, because this knotty problem appeals to him, but admits he hasn't a glimmer of an idea and confided in Sir Austin that he hopes they haven't sent Gerald to his death. Bathurst is justified in believing the case outside routine when the bodies of father and son are found in a copse. David Somerset was shot through the head and Geoffrey had a fractured skull, but, while David Somerset was clasping a revolver, the possibility of murder/suicide is rejected as "fantastic rubbish." Chief Detective Inspector Andrew MacMorran and Bathurst have a long haul ahead of them with more disappearances and murder.

Fear and Trembling is a genuine, 1930s detective novel, but Flynn wrote and structured the story like a turn-of-the-century adventure thriller with Bathurst retracing Somerset's footsteps on the day he vanished, tracing the elusive syndicate and trying to figure out what they're after – bringing him face to face with a femme fatale. A mysterious woman who acts as a spokesman for the syndicate and she manages to unbalance the normally smart-alecky detective. Steve Barge, the Puzzle Doctor, who wrote the introduction for these new Dean Street Press editions noted in his 2018 review described the flirting between the two as "antagonism interlaced with compliments and a little innuendo" and "cut from the same cloth" as the romances found in John Dickson Carr's work. Steve's not wrong. There's even a fleeting hint of Carr when the woman vanishes from moving taxicab tailed by the police, but their entanglement reminded me of Spike Tracy's predicament with Patsy in Harriette Ashbrook's Murder Comes Back (1940).

Not unexpectedly, chasing this mysterious woman and syndicate around places Bathurst in one, or two, tight corners. Flynn used the aftermath of one of these situations to recreate a scene from Sir Arthur Conan Doyle's "The Adventure of Charles Augustus Milverton" (collected in The Return of Sherlock Holmes, 1905). This is not the only hint of Sherlock Holmes in the story.

So you might be wondering how, what appears to be a Doylean thriller, turns into a proper, fairly clued and inventive detective story, but it's difficult to describe or provide some finer details without giving anything vital away – which would ruin the excellent ending. However, I can say that the second half has one of the all time greatest bookshelf clues I've ever come across and a very relevant clue to the main crux of the plot. And good plot at that. The basic idea behind the plot is something that has been done before and since, but how it was done is something else I've never seen before and is quite ingenious and shrewd. There's one detail that gives me pause for thought, but suppose that can be put down to the times and certain aspects of police work not being as thorough as they are today. See if you can spot it.

Yeah, all things considered, Fear and Trembling is a mystery novel impersonating a turn-of-the-century thriller, but with the inner workings of a cleverly twisted, 1930s detective story with plenty of clues and misdirection to keep the reader engaged. I completely agree with Steve that this is one of Flynn's ten best novels that should have made him a much better-known mystery writer during his lifetime. Highly recommended!