Paul Doherty's The Herald of Hell (2015) is the fifteenth title in the Sorrowful Mysteries of Brother Athelstan series, originally published as by "Paul Harding," which takes place in May, 1381, as "the day of the Great Slaughter" of the Upright Men dawned and "the flame of rebellion would burst out" – a period when conspiracies, fear and murder engulfed London. The Herald of Hell is the mysterious envoy of the Upright Men who "appears at all hours of night outside the lodgings of loyal servants to the crown" to intimidate and threaten them with doggerel verses. But the Herald is the least of Brother Athelstan's problem. 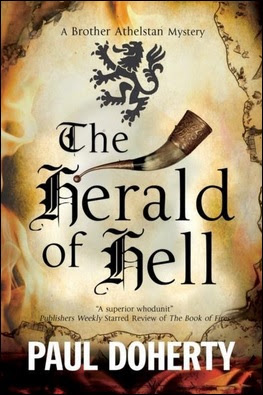 John of Gaunt, self-styled regent, protector and uncle of the boy-king, Richard II, has designs of his own with his Master of Secrets, Thibault, secretly meeting with one of the leaders of the Upright Men, Wat Tyler. What they have to say to each other is plain treason concerning the fate of Richard II and an enigmatic cipher, which was seized from one of the Upright Men's courier, Reynard. Only thing that was missing was the alphabet, or key, to decipher the message. Something even the cruel, tortuous interrogations of the time had failed to bring forth.

Master Thibault allowed Reynard to recover in Newgate with "the opportunity to reflect and mend his ways," which could net him a full pardon from John of Gaunt. And, in the meanwhile, Master Thibault tasked Amaury Whitfield with breaking the cipher. This is where carefully laid plans slowly begin to unravel on all sides.

Amaury Whitfield is a clerk of the secret chancery and skilled in cryptic writing, but recently, he began to understand how far the web stretched and a nighttime visit from the Herald of Hell impelled him, under the cover boon days, to flee to the Golden Oliphant – Southwark's most notorious brothel. There he attended with his minion, Oliver Lebarge, the Festival of Cokayne. But, on the morning following the festivities, Whitfield failed to emerge from his room and the door had to broken down with a battering ram. Inside they find Whitefield dangling from a rope which had been lashed to a lantern hook on the ceiling beam! The key was still on the inside of the lock, eyelet covered, while the windows shutters were closed and barred. The room is situated at the top of the house and overlooked, besides a sheer drop, a garden where guard dogs roam at night. So how could have been anything but suicide?

A highly agitated Master Thibault officially commissions Sir John Cranston, Lord High Coroner of London, and his secretarius, Brother Athelstan, to investigate the mysteries at the Golden Oliphant. And to unlock the cipher.

The brothel proves to be a hotbed of murder, treachery and intrigue with a second cipher to a long-lost treasure, the Cross of Lothar, the presence of a spy of the Upright Men and a second, quasi-impossible murder late in the story when one the characters tumbles down the steep, narrow staircase – which is still a fraction of what happens in this 200-page novel. Doherty ensures his reader is never bored with his characters constantly plotting, and counter plotting, or dragging cartloads of corpses across its pages. Something is always happening and "everything is connected" like "beads on a string."

One aspect I deeply admire about Doherty's best detective novels is how they're written as historical epics without diluting the detective story elements, such as A Murder in Thebes (1998), which is a trick he repeated in The Herald of Hell. While treason is plotted and the Earthworms, foot soldiers of the Upright Men, openly roamed the city and intervened in executions, the attention on the Golden Oliphant remained tight and focused without making it feel isolated. The solution to this portion of the story is excellent with the events at the Golden Oliphant best described as a Golden Age-style locked room mystery transplanted to 1381.

The first locked room-trick is a variation on an age-old trick and how it was done is easy enough to figure out, but the small variation successfully blinded me about another key aspect of the solution. Second, quasi-impossible murder has an equal simplistic explanation, but the aim of that trick was to create the kind of alibi you would expect to find in a Christopher Bush novel.

Naturally, there much more to the plot with many moving parts and additional corpses, such as the treasure hunt, ciphers and the personal challenges and dangers the friar has to face before he could move towards "a logical conclusion to a most vexatious problem" – reconstructed, piece by piece, during a lengthy exposition. Something that was necessary to tie everything together, but certainly didn't detract from the overall story. The book ends on a kind of cliffhanger that will be concluded in The Great Revolt (2016), which very likely going to be my next read.

So, all things considered, Doherty has plotted better locked room mysteries, but The Herald of Hell is one of his better historical novels in which he seamlessly blended historical events with pure fiction. Highly recommended!

A note for the curious: The Herald of Hell is a crossover novel by stealth! One of the places that plays a role in the story is a church, St. Mary Le Bowe, where a hundred years ago a Laurence Duket had fled to for sanctuary. The church was "locked and sealed for the night," but, when it was unlocked the following morning, the priest found Duket hanging from a wall bracket and "the King sent a royal clerk to investigate." I knew this sounded familiar, and yes, it turns out this is a reference to the first Hugh Corbett novel, Satan in St. Mary (1986)! Unfortunately, it spoiled the name of the murderer, but to have iron-clad proof of Athelstan and Corbett living in different timelines of the same fictitious universe is the stuff of fandoms!