Lending the Key to the Locked Room (2002) by Tokuya Higashigawa

The map of the detective story is dotted with charming, unassuming and sleepy hamlets, villages and small towns, but, as Sherlock Holmes observed, "the lowest and vilest alleys in London do not present a more dreadful record of sin" than those tiny, outwardly peaceful communities – some of these fictional places have an alarmingly high bodycount. Murder, She Wrote had to turn Jessica Fletcher into a globetrotting mystery writer to not completely deplete the population of Cabot Cove and Midsomer Murders takes place in the undisputed murder capitol of the genre, Midsomer County. You can also find such crime-ridden hellholes, like Agatha Christie's St. Mary Mead, Ellery Queen's Wrightsville and Edward D. Hoch's Northmont, on the printed page. So a location can be as much a murder magnet as the detective, such as Midsomer County, but the latest translation from John Pugmire's Locked Room International found a new way to use this trope.

Misshitsu no kagi kashimasu (Lending the Key to the Locked Room, 2002) is the first novel by comedic mystery writer and current president of the Honkaku Mystery Writers Club of Japan, Tokuya Higashigawa, whose Ikagawa City series features "an ensemble cast with different colorful characters all solving part of the mystery" – or "they make things more confusing." The series is a personal favorite of the translator, Ho-Ling Wong, who did a sterling job in delivering another one of these tantalizing Japanese locked room mysteries to our shelves.

Lending the Key to the Locked Room begins with a prologue introducing the reader to a once thriving and growing port, Ikagawa City, where squid fishers became rich overnight, but "the massive armies of squid have not visited the port once in the last twenty years." So the place began to lose its luster and the aging mayor feared "the city would eventually be drained of its youth," which is why he initiated the creation of the first college in the city. Ikagawa City College is not ranked particular highly, but attracted attention all over Japan as the only college with a Film Department.

Ryūhei Tomura is a student of the Ikagawa City College Film Department, who "dreamt of becoming a legendary director," but, as a third-year student, he came to realize his limitations and decided to secure a normal, stable job within the industry – drawing on a connection he has with a small production company. Kōsaku Moro was a fourth-year student when Ryūhei was in a first-year student and helped him on his graduation project. They have been friend ever since. Kōsaku ensures Ryūhei he has a job with the IKA Film Company when he graduates, which leads to an angry, relationship ending row with his girlfriend. Yuki Konno accuses him of giving up on his dreams and they have an embarrassing, somewhat public breakup.

This situation sets up one of the more ambitious, intricately plotted, but ultimately simple, detective novels I've read in a while and presented a truly baffling problem with only a few characters.

Ho-Ling introduced Tokuya Higashigawa on his blog as a numerous writer who uses comedic antics as a "camouflage for cleverly-plotted mysteries" and his storytelling is certainly tongue-in-cheek, but not as funny as, let's say, Takemaru Abiko's Shinsoban 8 no satsujin (The 8 Mansion Murders, 1989) nor did it camouflage the cleverness of the plot – as the opening chapters stressed that the author was playing a deep game. Setup of the story is littered with timestamps and it becomes very obvious the movement, or locations, of the characters are a key-element of the plot. A setup culminating with Ryūhei finding himself in an apartment with a dead body in the bathroom, but all of the windows were locked with a crescent latch and the sturdy, steel front door is chain-locked. 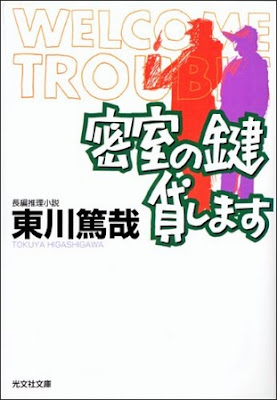 Ryūhei knows didn't commit the murder, but finding himself in the middle of an honest to God locked room mystery is not his only problem. Another person was killed that night and Ryūhei is the only link between the two victims, which places him in the cross-hairs of Chief Inspector Sunagawa and Detective Shiki. So he turns to the only person who could possibly help him, Morio Ukai, who's Ryūhei's ex-brother-in-law and a private detective who advertises with "Welcome Trouble!" Admittedly, Ukai dragging Ryūhei around the place as they impersonate police detectives, when Sunagawa and Shiki were unaware there was a second body, was genuinely amusing. I much more admired the undisguisable clever plotting, clueing, red herrings and the false solutions.

One of the false solutions is proposed by a homeless man, Kinzō, who hopefully returns in a later novel, or short story, because he would be perfect as a one-shot detective who operates in the cardboard section of Ikagawa City. By the way, the story mentioned his name literally means "moneybags" in Japanese. It would be a waste not to use him again.

Lending the Key to the Locked Room tries to pass itself off as a comedic mystery novel, but everything about the plot, despite some modern touches, reminded me of early period Christopher Bush with a plot revolving around two murders committed within "a very short time-frame" and the two detective each finding a part of the overall solution – not to mention the presence of a brilliant alibi-trick with the locked room angle being a bonus. Nearly everything fits together perfectly, clues, red herrings and the general cussedness of things, but there are a few smudges and imperfections. Most glaring flaw being the question of motives, which is obfuscated until either very late into the story or only revealed at the end. It's not unimportant to the solution either and robs the reader of the opportunity to put all the pieces together themselves.

Secondly, there's a rather important aspect to the solution to one of the murders that's not brought up until quite late in the story and not every reader is going to appreciate the answer, but personally, I didn't dislike it. It could have been clued a bit better and earlier, but suppose you can chalk that down to a debuting writer being anxious not to give the whole game away too early because otherwise the clueing was top-notch.

So barring these minor smudges and imperfection, Lending the Key to the Locked Room is now one of my favorite titles to come out of LRI and another testament to the greatness of the shin honkaku school. Not only have the Japanese been awesome custodians of the detective story and rejuvenated the genre, showing an old dog can learn new tricks, but their first novels usually hit the ground running. Not always entirely perfect. But they're usually impressive first stabs at the genre. Tokuya Higashigawa's Lending the Key to the Locked Room is no exception. Highly recommended!

My apologies for cramming this review so shortly after the one of Marcel Lanteaume's La 13e balle (The Thirteenth Bullet, 1948), but had nowhere else left to put it before the end of the year. Yes, this one has earned a spot on my 2020 best-of list.