Shelly Reuben is a New York private detective, arson investigator and an Edgar nominated crime novelist whose goal is to bring "the emphasis on values, heroism and moral conflict" which "so characterized the great novels of the nineteenth century" – updated to reflect "the issues, settings and circumstances of our time." Spent Matches (1996) certainly resembles a Victorian-era serial novel with its multiple, interwoven storylines with a shared cast of characters and settings. But that's not what put the book on my radar. 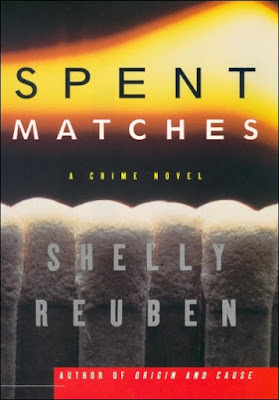 Brian Skupin's Locked Room Murders: Supplement (2019) erroneously lists Spent Matches as a 1986 novel concerning the "destruction of paintings by fire in a secure museum" and impressed me as something similar to Herbert Resnicow's 1980s impossible crime novels. A completely wrong impression that was corrected upon reading. I was surprised my second, more informed impression proved to be spot on when I found Reuben's quote about wanting to enlarge the scope and scale of the nineteenth century novel to include modern issues and settings. She definitely succeeded in summoning the ghost of the Victorian serial novel with these three, interconnected stories about firebugs and the man who brings them to justice, Wylie Nolan. But what about the locked room, you ask? Good question!

Luckily, Spent Matches deserves to be listed in Skupin's Locked Room Murders and the stated problem is a genuine impossibility, complete with a false solution, that takes up the majority of the story.

Wegman Zigfield is an 80-year-old entrepreneur who bought an old church and converted it into the Zigfield Art Museum, exhibiting only representational art, classic or contemporary, but his son, Former, is "an ardent admirer" of Sarkin Zahedi – who's also his closest friend. However, Zigfield hates all abstract art and forbade his son to bring Zahedi's work into his museum. So he concocted a scheme and, behind his father's back, Fromer applied for a grant, printed catalogs and sent out press releases to the media. Canceling the exhibit would mean getting entangled in expensive litigation, but Zigfield punished Fromer by replacing him with Jiri Hozda as associate director. A man who has a very personal reason to dislike modern art. Zigfield also reduced the exhibit from ten to five paintings and moved it to the Parlor Gallery, which has "stained glass windows, restricted wall space and skylights." But that's where the trouble begins.

On an early Friday morning, the museum guard is put into the action by the smoke alarm in the Parlor Gallery, but when he unlocks the door, shielding his nose with one hand, he discovers nothing was on fire inside. The Sarkin Zahedi collection was "reduced to empty rectangles suspended on sooty walls" over "neat piles of debris that had accumulated on the floor."

The laying down of the problem of the locked gallery demonstrated a reassuring awareness of the impossible crime story. The heavy door and windows were securely locked with no evidence of "forcible entry into the gallery prior to the fire" or even anyone entering the museum during the night. A keypad automatically records everyone entering on a printout in the security room and the motion detectors in the corridors weren't triggered. Zigfield tells Nolan that he doesn't like locked room mysteries and Nolan has to admit it's "one of the weirdest damn fires" he has ever encountered, because it looks as if the room either committed suicide or a ghost did it – a ghost who burned the paintings one by one. Solution to this locked room problem is good and delightfully demonstrates, metaphorically, "why so many arsonists become their own victims." However, you can make a rough guess what happened, because putting the clues and significance of certain things together requires some expert knowledge. Nolan even had to consult a higher authority on a piece of evidence. Still a very well done impossible crime with an original premise and satisfying conclusion.

On a side note, I suspected a slightly different solution, based on the layout of the gallery,
resembling the brilliant locked room-trick from "Petals of Envy" (Fire Investigator Nanase, vol. 1).

There are two more storylines in Spent Matches. One of these

storylines centers on Mathilda Yee, an attorney, who has her office in the same building as Nolan, but lately, someone has been starting fires in the ladies' room. Whoever is responsible is trying to frame her. Nolan makes quick work of this case and have nothing else to say about it. This plot-thread was a little too modern for my taste.

Strangely enough, I found the third and last plot-strand weirdly compelling and this one focused on a young man, Camden "Camelot" Kimcannon, who has an extreme, almost retroactive, case of arrested development – who lives with his verbally abusive mother. Nevertheless, he's, what can be called, an eccentric dreamer who dresses like an artist, or poet, from a bygone era and even writes with a quill pen! His attic room is crammed with books on King Arthur and nothing else that "wasn't conceived of earlier than a century ago." A dreamer who has buried his soul deep in the past, but in a stunted, childlike manner. Camden volunteers at the museum in the naive hope of getting to help with the exhibition of pre-Raphaelite paintings, but the guest curator, Georgina Weeks, decides to allow him to help her. She also tries to get him away from his mother, but this will disastrous consequences when he becomes the suspect in an arson homicide. Nolan again goes to the scene of a fire to look at the evidence the flames left behind.

Nolan annoyed me when he appeared in the gallery case, but improved as a character over the course of the story and shined, as an arson investigator, in the last case as he gave a brief and interesting look at how an arson/crime scene investigator works – comparing his method to that of a forensic pathologist. Years later, these kind of scenes would form the basis for the whole CSI franchise.

Spent Matches is despite its Victorian-like plot structure and an original locked room problem a modern, character-driven crime novel and had no reason to like it, but quite enjoyed this modern curiosity. Not a classic of its kind. Certainly not! But a fascinating curiosity of the locked room mystery tucked away in modern crime novel with balanced characterization showing both the darker and lighter facets of human nature. So not recommended to everyone who reads this blog, but if it can keep the Grand Inquisitor of the Plotting Department reading, you also might find it worth your time.