The Simple Art of Murder

"A museum is a place where one should lose one's head."
- Renzo Piano

Isn’t funny how some of the heirs of Dashiell Hammett and Raymond Chandler, setting up shop on those mean streets during the 1970s, became the custodians of the traditional, (mostly) fair-play detective stories by incorporating elements from them into the first-person, reflective narrative that defines the Hardboiled Detective?

Notable examples are Joe Gores and the husband-and-wife writing team consisting of Bill Pronzini, known for his ongoing biography of the Nameless Detective, and Marcia Muller, creator of the iconic female private eye Sharon McCone. I have reviewed work from all three writers, having delved more extensively in some than in others, but combined, you can trace a line between their stories that delineates a movement of crime writers who were aware of what came before them – and build upon those traditions rather than disregarding them. The old cunning fox may have been dragged out of his warm, comfy drawing room, but a few of his descendents obviously inherited some of his tricks. 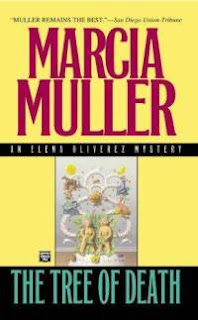 Marcia Muller's The Tree of Death (1983) introduces a new character, Elena Oliverez, curator of the Museum of Mexican Arts in Santa Barbara, who is forced to play detective after a murder threatens to ruin the opening of the museum and even curtail her freedom!

The victim in question is the indolent and repulsive Frank de Palma, director and fundraiser of the museum, who accepts a monstrous, garish ceramic árbol de la vida, tree of life, from a rich patron of the museum, but Elena despises it – thinking that a piece that looks like an oversized souvenir from Tijuana reflects badly on the rest of the collection. Oliverez and De Palma bounce opinions off one another, before the later decides that he really should fire her and the former concludes that someone ought to murder him. And someone does. De Palma decides to work late and Oliverez sets the alarm and locks the door, effectively locking him in until he decides to leave, but when she comes back next morning he's still there – buried under the debris of the tree of life. Naturally, Lt. Dave Kirk fancies her as his number one suspect.

Well, at first, I lumped Oliverez in with Lawrence Block's Bernie Rhodenbarr and William DeAndrea L. DeAndrea's Matt Cobb, professionals in their field who, through their work, come into contact with murder and their narrative voices echo the hardboiled school, but they're more softboiled whodunits, however, as the story progressed, it became more and more reminiscent of Herbert Resnicow's Alexander and Norma Gold novels.

The Tree of Death gives the reader a peek behind the walls of rooms and cellars of a museum that are normally closed-off for visitors, much like in The Gold Frame (1987), and is populated with professionals and knowledgeable people who occasionally share little nuggets of information – something that was (admittedly) more pronounced in Resnicow than in Muller. The solution for the problem of the locked museum is also something that can be labeled as typical Resnicow, who must have found even a sealed library to be too claustrophobic for a proper impossible situation. Locked rooms and closed spaces consisted in Resnicow's stories of multi-level chambers for acoustic testing (The Dead Room, 1987), entire theatres filled up with people (The Gold Deadline (1984), The Gold Curse (1986) & The Gold Gamble, 1989) and are stage with a play in progress, but always managed to wrap them tighter than Scrooge's wallet and used every nook of a building to his advantage. That's exactly what Muller did here and made me love the book even more, because I dote on Resnicow and The Tree of Death may have left its mark on his work!

The most interesting difference was how the victim was characterized, which in Resnicow's novel is usually done after the murder has been committed and we get a thorough account of his life, sort of a short story within a novel, but here we get to know De Palma through the eyes of Oliverez. We get the impression that he's your stereotypical murder victim who was born to play the part of a corpse, but Muller humanizes him in an interesting way. After the body is discovered, someone fetches a drink for Oliverez and gets it in De Palma's cup - with a heart and the word "DAD" printed on it. It won't make you care a lick more or less about De Palma, but it's a good objection to his murder no matter how unlikeable he was. I never had second thoughts like that by any of Resnicow's victims, and more importantly, it's a fact that's not beaten into the ground. It's a reflection, a sudden realization that the mangled body on the floor was a person and not a stageprop. And that made it feel more real and memorable.

Anyhow, this is a blog dedicated (mostly) to neglected mystery writers, but The Tree of Death rubbed in the fact that I have been neglecting Marcia Muller. I'’m sure I will have to answer for that to a couple of ghosts, but at least DeAndrea as the Ghost of Christmas Present should be fun as he shows me the error of my ways.
Geplaatst door TomCat on 11/21/2012