Magician Under the Moonlight

"Rationality, that was it. No esoteric mumbo jumbo could fool that fellow. Lord, no! His two feet were planted solidly on God's good earth."
- Ellery Queen (The Lamp of God, 1940)

The last time I looked at Case Closed/DetectiveConan, the volume ended, as per usual, with the opening of a story that served as a cliffhanger and concludes in the last scheduled release of 2012 – one of the omens that the year is crawling to its end. But lets lament the passing of time another time and go on with the review! 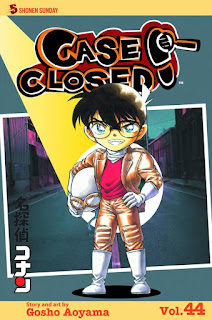 On the field of Koshien Stadium, two high-school baseball teams are batting away in order to impress the scouts scattered among the throng of enthusiastic baseball fans, but unknown to the players and onlookers, a dangerous game is being played from the sidelines. A bomber is sending coded messages and challenges Conan and his friend/rival detective, Harley Hartwell, to find the bomb before he blows up the entire stadium. More a suspense than a proper detective story, but the tension is well handled and loved the story-within-a-story approach. On the field, you have a duel between two baseball teams that becomes the backdrop for the bomb race on the sideline and they intertwine as the story progresses.

One quibble: how come neither detectives noticed the bomber before? He rather stood out on those stairs... clinging to that suspicious looking bag... hat drawn over his eyes… passively standing with slumped shoulders between cheering fans... hm. But a fun story. By the way, I was informed that two of the baseball players were characters from one of Gosho Aoyama's earlier manga series – 3rd Base 4th.

Next up is a chapter from the Metropolitan Police Love Story arc, in which the reader, and let's be honest, pretty much the entire police force, follows the developing relationship between fellow officers Takagi and Sato. It's Aoyama’s take on the police procedural and it gives an opportunity to the policemen of these stories to become more than just background filler. This story is a particular good example of this.

A rumor is making its way around the police office, implying that Takagi is going to be dispatched to the Tottori Prefectural Police for a joint investigation until that particular case is filed away as solved – which could mean a separation from Sato for a year or even longer. Meanwhile, he's assigned to investigate the stabbing of an office worker and his fiancé points to her ex-boyfriend as the murderer, but he has a watertight alibi for the time of the murder. As a matter of fact, his alibi is their police colleague Chiba! They're friends and Chiba offered him a place to stay and they were up all-night watching episodes of Samurai Kid. A good excuse to rummage around in the private life of Chiba, but I also thought that the conclusion was done satisfactory – even if it was a tad bit too clever and complex. Bonus points for actually finding something useful to do for The Detective Boys while Conan is solving a case.

Finally, we have the main event of this volume and it's one that could headline any Las Vegas magic show! One of Serena Sebastian's wealthy relatives, Uncle Jirokichi, came into possession of The Golden Goddess and The Blue Wonder, a golden figurehead of a woman holding up a blue aquamarine stone that once protected The Sea Goddess from pirates during the Age of Discovery, and he want to use it as bait to lure from hiding and capture the Kaito KID – an elusive and legendary thief with an inexhaustible bag of tricks.

Challenge accepted, KID proclaims that he will simply walk up to The Blue Wonder, mounted and displayed on the roof of the Sebastian Museum, and simply snatching it away! He even promises a public preview of his coupe-de-grâce and puts in appearance the night before the heist and how: hovering in mid-air, he can look directly at the statue as he makes his first, tentative steps towards it and the helicopters that are closing in on him eliminates the assistance of cables attached to a black balloon or the buildings besides him – before disappearing in a puff of smoke. You may argue how workable and believable the explanation is, but it lives up to the premise and it was brought convincing enough. It's easily one of the best and grandest KID stories (I have read) to date and loved the interaction between Conan and KID towards the end. I really hope to find more of these Grand Heist stories in one of the forthcoming volumes.

The last chapter sets-up a story that will continue in the next volume and involves a school ground legends and a haunted desk.