"The spirit answered not, but pointed onward with its hand."
- Charles Dickens' A Christmas Carol (1843).

Een licht in de duisternis (A Light in the Darkness, 2012) is the seventh entry in the Bureau Raamport series, recording the daily caseload of a pair of Amsterdam homicide detectives, Peter van Opperdoes and Jacob (last name unknown), who were modeled on their creators – former homicide cop Appie Baantjer and now part-time detective Simon de Waal. Originally, the books were published under the byline Baantjer & De Waal, but after Baantjer passed away, at his request, the series was continued as De Waal & Baantjer with Baantjer's share of the royalties going to charity. 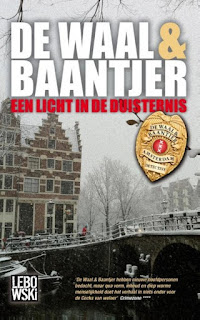 On a night, a dark and cold December night, Peter van Opperdoes wakes up to find the city wrapped in a blanket of snow and inclines to melancholic musing on things past, when the whispering voice of his late wife disturbs his reverie and encourages him to take a short walk. As I noted in my review of Een mes in de rug (A Knife in the Back, 2012), the ghostly, disembodied voice of Van Opperdoes' wife is a non-intrusive, supernatural entity hovering in the background and she's not allowed (from the higher up's) to intervene in human affairs. She's merely there to give spiritual support to her husband or, in this case, act as a catalyst.

Van Opperdoes strolls through the deserted, snow covered streets and the quiet, dream-like image of the city gives him a sense of unreality, as if he fell through the cracks of time, expecting any moment a hansom cab coming down the street or bump into a 19th century gendarme, but his actual discovery isn't any less strange. Between a troupe of statues, now mantled in robes of snow, someone placed a sculpted head of clay with a candle on the ground – it's flame flickering like a ghost light.

This dreamy sequence is probably my favorite part of the book and shows that De Waal can write, and I almost wished he continued this style of story telling through out the book, but morphing it back to a straight-up police procedural was probably the best decision. When Van Opperdoes and Jacob revisit the scene the next morning, when life resumed its normal tenor, it conveyed that sense of waking up – with everything snapping back to normal. Except that the head is still there! It's a recognized as a young man, named Martin, who's a local and his mother hasn't heard of him from in three months.

Martin's father Willy, an intimate acquaintance of the police who spend most of life behind bars, went missing around the same time and thus begins a long pool expedition search pass cafés and even an obscure coffeeshop – and nearly everyone they question seems to be either criminal or appear to have close ties to them. This eventually leads them to a crime-scene that went undiscovered for months, but the dry conditions of the house and the cold weather has preserved it remarkably well and it was briefly teased as a locked room mystery.

However, I'm long since pass wanting a baffling impossible crime from De Waal. Ok. Maybe not that long. But the first chapter of A Light in the Darkness has convinced me that a double-layered story, one taking place in the time of C.J. van Ledden-Hulsebosch and the other in the present with Van Opperdoes and Jacob, with the two threads tying together in the end, would be even better. I even have a title that fits the series: Een gebed zonder einde (a proper, but not literal, translation would be A Never-Ending Story). It also fits into the religious themes Baantjer was so fond of working into his plots and sort-of a nod to the Baantjer TV-movie De wraak zonder einde (An Endless Wrath, 1999; co-written by De Waal).

Somehow, somewhere, Frederic Dannay is looking over a copy of Ellery Queen's Mystery Magazine and nods approvingly. I... I just know he is.

A note for the confused: De Waal co-wrote a handful of excellent historical novels with Dick van den Heuvel about Van Ledden-Hulsebosch, a real-life counterpart of Dr. John Thorndyke, or rather, a real-life colleague of Dr. Joseph Bell – Conan Doyle's teacher whose methods of observation were adopted by Sherlock Holmes! I always wondered, if that awful, untranslatable pun they had planned for a book title (if you're curious, the title was Moord(w)apen) killed the series prematurely. Their publisher had good reason to believe they had lost it after their spoof of The Da Vinci Code (2003), in which Albert Einstein helped C.J. clear up a dark conspiracy enwrapping Amsterdam (De Rembrandtcode, 2006). Note to self: reread that series! Anyway, lets wrap things up here as well...

A Light in the Darkness was better than I anticipated and the story ended up not being just another charming, urban police procedural that spends more time looking at buildings (or other trivial matters) than at the clues. It's still a police procedural that puts emphasis on investigative police methods and characterization, but the plot was well put together and stands comparison with the works of Bill Pronzini and William L. DeAndrea.

I think Baantjer would've been rather proud, if he knew he co-wrote this book. Two years after his death. The critics can defile him, decease can kill him and his remains can be buried, but even the most devout excorcist could not keep his "spirit" from the bestseller lists!