"Every tick that I do give
Cuts short the time you have to live.
Praise thy Maker, mend thy ways,
Till Death, the thief, shall steal thy days."
- Inscription on a clock.

Perched on the summit of a windswept Cornish cliff, Flint House glances down to the pallid and legendary face of the Moon Rock, more than 200 feet down, where the ghostly moaning of the gray sea and the ghosts of drowned lovers resonate against the cliff walls – imbuing me with the conviction that the sole purpose of its construction was to accommodate family skeletons and restless spirits. 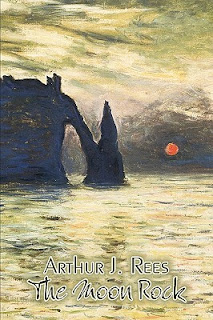 And every now and then, the rustic wailing of the Cornish coast and its ghosts are disturbed when the living settle down with their problems, like that one time when Robert Turold, an embittered, selfishly cruel and solitary man who amassed a fortune abroad for the upkeep of his hobbyhorse, showed up with his dysfunctional relatives in tow. These dire forebodings and its aftermath were recorded by Arthur J. Rees in The Moon Rock (1922).

Robert Turold's concern, or rather his idée fixe, is with proving that the Turolds sprang from the youngest brother of the last Lord Turrald and staking his claim for a Baronial title in abeyance for over four hundred years, which eventually brought him to Cornwall.

The last scraps of proof are buried in Cornwall's history and Turold turned to Dr. Ravenshaw, a local authority on antique and archeology, to help him find them. It's a collaboration that yields results, convinced and satisfied that they have valid case to bring to the House of Lords, but than Turold's wife does a startling death bed confession: she's a bigamist! Some skeletons are best left in the closet, however, Turold's obsession with obtaining the vacant family title, Lord Turrald of Missender, that he now wants the title, once it's his, to descend to his brother, Austin, and then to his brother's son, Charles – sacrificing and publicly disgracing his daughter in the process.

MILD SPOILERS, highlight to read: very few laughs and chuckles are shared in this story, and nearly every good and remotely likeable character is overshadowed by Turold’s evil and very little good is restored by the end of their trial.

Not long after these events, on a bleak, Cornish evening, when the wind howls around Flint House, locked and barred for the night, Turold is shot in his study and it looks like suicide. The door was secured from the inside and only a window offered escape from the room. That is, if you're suicidal. It's a 200 feet death drop on the spiky Moon Rock. Unfortunately, Rees barely gives any consideration to this aspect of the plot and the explanation was easy enough, nonetheless, I did not entirely dislike it.

SPOILERS, highlight to read: I rather enjoyed the idea of a "journeying key" before it ends up back on the scene of the crime and creating a locked room problem along the way. 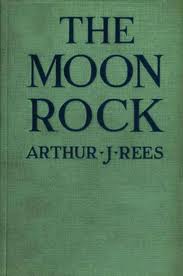 The real attraction of this story is the story itself. I loved the old-fashioned, impressionable writing style that brought the somberness of the Cornish coast to life ("like a ghost from the grave," said the hack reviewer) and harked back to the days of a previous generation of mystery writers. The Moon Rock reminded me in parts of Fergus Hume's The Mystery of a Hansom Cab (1886) and J.E. Preston-Muddock's Dick Donovan: The Glasgow Detective (collected in 2005). Like Hume's The Mystery of a Hansom Cab, Rees' The Moon Rock unfolds itself despite several investigative characters prowling around. We see the official investigators, like Detective Barrant of Scotland Yard, a less official enquiry by Mr. Brimsdown, Turold's trusty lawyer, and Charles Turold fleeing to London to search for the missing Sicily like a lovelorn puppy, becoming a fugitive in the process, but it's a chance discovery and a confession from the murderer that clears up all the loose ends. Rees also drew from Conan Doyle's Sign of Four (1890) to give an account of the dark secret, buried in the distant past, that Turold lugged around for many frightful years.

When I began writing this review, I looked up Rees and learned that he was born and grew up in Australia, before moving to England as an adult, so Hume may have actually influenced Rees' writing.

All in all, The Moon Rock is perhaps a relic that belonged to an even earlier era, but therefore not any less interesting or readable (if you don't expect a GAD-style crafted and plotted gem), and as I said before, I liked the evocative writing and gloomy, windswept Cornish setting of the story. Perhaps more could've done with the legend of the drowned lovers haunting the Moon Rock and the importance of the clock (and the clock lore attached to it) could've been played up more for effect.

Connoisseurs of late 19th/early 20th century crime fiction will most likely be the ones who will enjoy this book the most... unless they deplore bleak and dreary endings. In that case, you might regard it as an over padded suicide note that the publisher was too afraid to reject.

Edit: you can read the book as etext on Project Gutenberg.
Geplaatst door TomCat on 11/10/2012