"Sometimes we have to stand on our heads in order to see things the right-side up."
- Hadji (The Alchemist)

The last time I attempted to critique a Perry Mason mystery, The Case of the Empty Tin (1941), I ended up churning out an elongated synopsis of the plot, but only because they’re complex, plot-driven stories and discussing them past the first quarter of the book without giving anything away is very difficult. No – it's nigh impossible to do! 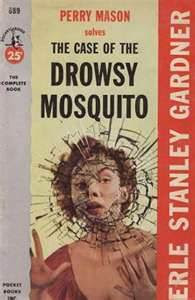 The Case of the Drowsy Mosquito (1943) poses a similar problem, in which Perry Mason takes on a case with enough angles to fill a small, bedside book stand – except that it's crammed between the covers of a single paperback. It all begins when "Salty" Bowers, who has the appearance of a distinguished tramp in a sun-faded suit, asks Mason to meet his long-time friend and mining partner, Banning Clarke, who was physically unable to come himself after suffering a heart attack. Upon meeting Clarke, the plot thickens... considerably!

Living and recuperating on the stretch of land behind his house, amidst the cactuses and shrubs, the mining engineer asks Mason to intervene in a scheme involving his mining company (and a legendary gold mine lost in the mists of time) and take on a fraud case that he's bound to lose, but these are just but a few threads in the rich tapestry of this plot.

Clark's in-laws, Lillian and her son James Bradisson, a cocksure and conceited president of the mining corporation, who fancies himself a business genius, become sick from arsenic poisoning. Live-in nurse Velma Starler is shot at by a prowler and hears the drowsy mosquito. Even Mason and his secretary Della Street are poisoned! The poisoning subplot is worked out alongside the other problems, intertwining here and there, showing that Agatha Christie wasn't the only name in the game that knew how to properly utilize that stuff. As a matter of fact, these poisonings could've easily been presented as impossible situations to beef up the plot even further, but then again, that might have been overdoing it just a bit. But it's cleverly done and even provides an interesting legal problem when Banning Clarke is murdered when he was already minutes, perhaps even seconds, away from succumbing to a lethal dose of arsenic poison. So who do you charge with murder? The person who administrated the arsenic or the person who pulled the trigger?

Like in the previous case I reviewed, Perry Mason functions more as a slick, manipulative private detective than as a crafty attorney with a penchant for courtroom theatrics, however, we do get a glimpse of the courtroom technician in the fraud case – turning the tables on everyone and takes James Bradisson and his lawyer down a peg or two.

But the most notable aspect of The Case of the Drowsy Mosquito is the desert setting and how the plot is build upon it. Somehow, it reminded me of one of Gardner's Sheriff Bill Eldon stories, "The Case of the Runaway Blonde," collected in Two Clues (1947), set outdoors and the vast expanse of ground are very important to the plot, but for completely different reasons. In another way, it also reminded me Clyde B. Clason's Blind Drifts (1937), which also involves "shenanigans" within a gold mining company, but where Clason was interested in technical side of the business, Gardner only concerned himself with the legal aspects of it.

All in all, an excellent read and The Passing Tramp should consider packing a few Perry Masons in that red handkerchief of his, because they've got enough plot on their spines to keep any mystery fan from feeling hungry.
Geplaatst door TomCat on 11/18/2012