"As an ex-detective you know how to deal with problems... you know the ropes... the meshes of the law."
- Inspector DeKok (Bullets for a Bride, 1993)

Ellery Queen deserves wider recognition among the members that make up today's reading audience, if not for their imaginative and inventive plots than for their willingness to adjust themselves to the movement prevalent at the time they were writing in, spawning a multiverse of crime that has something to offer for nearly everyone.

Personally, I prefer the earlier, puzzle-oriented novels from the international series, the marvels of the Ellery in Wonderland tales, crammed with zany architectural buildings, eccentric characters and dysfunctional families, the short stories (of which they didn't wrote nearly enough) and some of the anomalous books – like Cat of Many Tails (1949) and And on the Eight Day (1964). By the way, has anyone ever noticed how similar the plots of The Village (2004) and And on the Eight Day are, if you cut out the creatures? Of course, Queen's twist was better and it's one of the few mysteries were I hated the detective interruptions, which were weak and uninspired, and the plot would have, IMHO, worked better as a human problem. 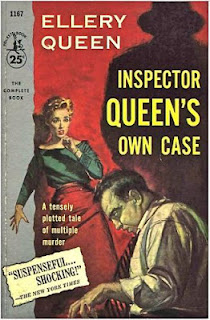 But that aside, I'm less than enthusiastic about the Wrightsville and Hollywood sagas, focusing more on character than plot, but I never thought them to be any more or less realistic than their plot driven stories – and having just read Inspector Queen's Own Case (1956) makes me disliked them even more. Calamity Town (1942) is one of the books that's often cited as an example of a good, character-driven EQ novel, but it left me unimpressed and a diminished interest in plotting didn't exactly help either. And having burned through most of the series, years ago, I had given up hope to find an EQ novel that invested in characters and still felt like you were reading a proper detective story, but Inspector Queen's Own Case did it for me.

Richard Queen has been feeling doleful ever since his mandatory retirement from the police force, finding it difficult to come to terms with his new status as a retiree and an "old man," and with his son Ellery abroad, he came to the Connecticut shore to stay with Abe Pearl, Chief of the Taugus Police Department, and his wife Becky – where he bumps into Jessie Sherwood.

Jessie Sherwood is a well preserved woman in her late forties, whose experience as a pediatric and maternity nurse brought her to Nair Island, a fortified recluse for the rich, where she's taking care of the newest addition to the Humffrey family, baby Michael, whose adoption was a shady affair to say the least, and before long, the house is rocking with more than just the wailing of a crying baby. And who would've thought that a creepy, late-night intruder in the nursery would've been the least of their problems.

Alton K. Humffrey's nephew, Ronald Frost, was relieved from duty as his uncle’s heir in favor of Michael, making him the only person with a motive for hurting a baby, but when Michael is eventually found dead in his crib, Frost’s also the only one in possession of an unshakable alibi. Sherwood remains convinced that the baby was murdered, based on a pillowcase with a dirty handprint that disappeared afterwards, but Richard Queen is the only one who believes her and together they begin to pry into the case – assisted by an Old Boys’ Network of retired colleagues from the force. Not an easy job, if your key witnesses are bumped off in front of you.

Two observations: Richard mentions in the story that Ellery is traveling for inspiration for his detective novels, which could mean that this book and the stories collected in Ellery Queen's International Case Book (1964), originally written and published between 1954 and 1955, took place around the same time. The second observation may be an original one, because I never seen it mentioned before and that while it's a typical piece of EQ symbolism. On the one hand we have Michael, smothered at infancy, and on the other Richard, a (re)tired police officer of 63, who finds a completely new life in the home were a very young life was cut short. Or am I over thinking this?

Inspector Queen's Own Case may not be the best title from the EQ catalogue, but it has a pleasant balance between its characters and plot, and besides, I’ve always liked Richard Queen and it was good to see him reach the end of a case without the assistance of his son (he was an inspector for a reason) and getting a bit of luck in his private life. The only real drawback is that, once you have figured out the solution, the story inevitable becomes too long and you can solve it before the halfway mark. I hope that in my defense of this novel, I have not divulged too much of the plot, but I think this is a far, far cry from Ellery Queen's worst mystery novels and stories (e.g. The Door Between, 1937).

Oh, and I will be honest, the dead baby can be considered as over doing the "let's go with the times" mindset and it also forced me to cut out a joke that probably would've ended up costing me readers.

I was thinking of following this post up with a review of Appie Baantjer’s DeKok en kogels voor een bruid (DeKok and Bullets for a Bride, 1993), which was the source from which I drew the opening quote, and Baantjer’s roman policier shares some interesting parallels with Inspector Queen’s Own Case... but it's one of his untranslated stories and I'm aware that not everyone likes to read reviews of books that they can't read. So, we'll see.
Geplaatst door TomCat on 11/05/2012