The Ghost of Oedipus

"There is nothing impossible to him who will try."
- Alexander the Great

A Murder in Thebes (1998) is the second book from a short-lived series by Paul Doherty, originally published under the name of "Anna Apostolou," which he resuscitated in the early 2000s and furthered the series with three more novels – all of them taking place during the historic rise of Alexander the Great. One of the greatest conquerors of the ancient world.

Initially, I wanted to sample one of the three books from the second period of the series. This phase includes such intriguing-sounding entries as The Godless Man (2002) and The Gates of Hell (2003), but in a recent blog-post, entitled "The Impossible Crimes of Paul Doherty," the Puzzle Doctor directed my attention to A Murder in Thebes – saying in his review of the book that "the solution is genuinely clever" and "the locked room is a masterpiece." Well, that got my attention! 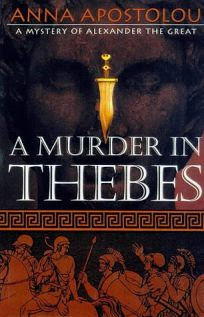 So, let's see if this self-professed locked room expert agrees with the diagnosis of the good doctor and one of Doherty's greatest advocates on the web.

In 336 BC, Philip II of Macedon was assassinated and his son, Alexander II, ascended to the throne, but the Greeks and Persians assumed this was the beginning of the end for the Macedonians. A grave mistake! Swiftly, the Greek city-states were forced to submit to the new king, "in a brilliant show of force," after which Alexander marched into the wild mountain region of Thessaly with the intention of bringing its tribes under his dominion.

While he was gone, rumors began to swirl of Alexander's death and how "the vultures were picking the bones of his army," which encouraged the Thebans to rise in rebellion and besieged the small garrison Alexander had stationed in their citadel – a place called the Cadmea. After being forced to return, Alexander sacked the city as a punishment for their treachery: houses, shops, taverns, council chambers and storages were "all reduced to feathery black ash." The stone walls were dragged down and everything worth as much as a sliver of silver was confiscated, which is a nice way of saying the city was plundered. Those who fought back or resisted were killed and everyone else were dragged to the slave pens. All of this is described in a single chapter that opens the book.

The sacking of Thebes further serves as an unusual moody, but effective, backdrop for the busy, intricate plot of the story.

As the remains of the city smolders, Alexander turns his gaze to the Iron Crown of Oedipus, which, legend has it, "only the pure in heart can wear" and "guilty of no crimes against his parents" – which is exactly why he wants to possess it. Alexander is determined that everyone in the land knows he received the blessing of the gods and had no part in the murder of his father. There is, however, one problem: the crown is tightly fastened on top of a stone plinth, inside a holy shrine, with a ditch full of glowing coals, a row of spikes and a snake pit in front of it. So taking the crown from a marble-lined room full of deadly obstacles will take some ingenuity. However, that's not all.

Before the arrival of Alexander's army, two of the members of the small garrison he had left behind at the citadel were brutally murdered: a lieutenant, Lysander, from Crete was sent as an envoy to talk with the Theban leadership, but he was murdered in the streets and was crucified in front of the citadel. This had a visible effect on one of Alexander's most trusted captains, Memnon, who became frightened and seemed to have committed suicide by jumping from the window of a top-room in the tower of the citadel. After all, the door was locked from the inside and a guard was posted outside of the door. The only living presence in the room was his loyal mastiff, Hercules. So how could a murderer have reached or penetrated this secure, top-floor tower room? 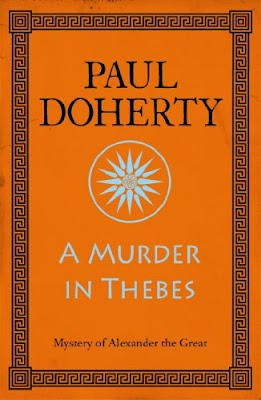 These deaths seem to be the work of a turncoat within the ranks of the small garrison. A person referred to as the Oracle and this traitor "spun his rumors and lies," which eventually lead to the destruction of the town. Understandably, the king wants this spy captured and crucified "for all other traitors to see."

Miriam and Simeon Bartimaeus, brother and sister, previously helped Alexander in quelling a sinister plot, which was recorded in A Murder in Macedon (1997), but now they have to tangle with a dangerous and formidable spy – one who is not afraid to bloody his hands with some dirty work. At the same time, they're also expected to find an explanation for the possible murder in the locked tower room and figure out how to retrieve the crown from the shrine. But there are more problems on the horizon. Yes, this book has a very saturated plot.

Not long after the fall of the city, the whispered rumors begin of sighting of the ghost of Oedipus: who has been seen dragging his swollen foot, blood-encrusted club in hand, around the streets of Thebes. Like one of the Nine Man-Eating Giants from Roald Dahl's The BGF (1982). These terrifying sightings are followed by a string of gruesome murders of Macedonian soldiers and guardsmen: all of them had their heads caved in with a massive club, but appeared to have been unaware of the approaching danger. The murdered did not take them out one-by-one, because they were nearly always killed in groups of two or four at a time. However, they were all taken by complete surprise.

This gives the murders a strong flavor of the impossible and was somewhat reminiscent (in presentation) of the killings of Napoleon's sentries in John Dickson Carr's massively underrated Captain Cut-Throat (1955). The explanation for these clubbing-deaths was pretty simple, but it made sense and fitted the plot very well. Luckily, the proposed explanation, which was disappointing, was attempted to be used as a scapegoat by the guilty party. I thought that was a nifty way to employ and redress a false solution.

Doherty sidestepped a similar pitfall with the impossible crime at the citadel's tower: everything seemed to suggest the army captain was scared out of the window, but there was a fiendishly clever, but simple, explanation – which seemed to be completely original as well. It wonderfully explained everything: why the locked door, guard and dog posed no obstacle to the killer. The mood of the victim and how a strong, rugged and old warhorse could so simply be overtaken and flung out of the tower window without a cry. A (minor) work of art!

On top of that, every aspect of the plot is reasonably clued or hinted at. Well, you might not be entirely able to work out how to lift the crown from its plinth, but, otherwise, it is fair enough.

So, all in all, one of Doherty's better and more interesting historical mysteries, as well as one of his best locked room novels, which plays out against the smoldering remains of a sacked city. That also added to the overall quality of the book. A Murder in Thebes is definitely recommended.
Geplaatst door TomCat on 9/04/2016