"This... is more wildly improbable than any roman policier I have ever read."
- Dr. Constantine (Agatha Christie's The Murder on the Orient Express, 1934)

Last month, I took a look at Molly Thynne's Death in the Dentist's Chair (1932), the second of a trio of mystery novels, starring Dr. Constantine and Detective-Inspector Arkwright, which were recently brought back into circulation by the Dean Street Press – prefaced with an introduction by Curt Evans. The book warranted further investigation into this short-lived series, but was conflicted as to which of the two remaining titles to pick up next.

I wanted to go with The Crime at the Noah's Ark: A Christmas Mystery (1931), but, after carefully scrutinizing the calendar, I came to the conclusion that the dusk of summer was still too early for a yuletide yarn. So I settled for the other one. 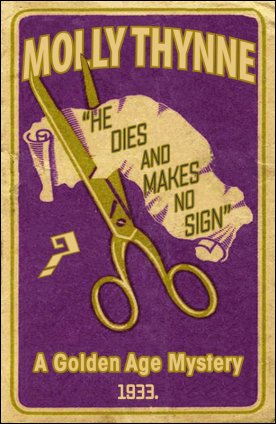 He Dies and Makes No Sign (1933) marked the final appearances of Dr. Constantine, Arkwright and Manners, which makes this book their last hurrah. However, the book also served as a punctuation mark that ended the literary career of its author. After its publication, Thynne retired from writing fiction and began her rapid decent into obscurity, which is where she languished for eight decades – until she was finally found by DSP and Evans. Let's get this review off the ground.

The book begins with Dr. Constantine coming home from a trip to continental Europe, where he suffered an annoying defeat in a chess tournament, which made his disposition as moody as the rainy weather of England. Opportunely, there seems to be a potential case, to relieve his mind, impatiently waiting for him at home: his valet, Manners, tells him the Duchess of Steynes tried to reach him. She was greatly annoyed by his absence and wished to be immediately informed when he returned from the continent. The problem she has for him has the appearance of a domestic triviality, one of the old-fashioned kind, but, before long, this problem turned into a murder case.

Marlowe is the only son of the Duchess and "the despair of half the mothers in the country," not excluding his own, but he finally met a girl, "an actress of sorts," with whom he wants to settle down – which did not fail to horrify and worry his mother. So Dr. Constantine finds himself poking around to see how matters stand, but soon the first of many complications arise. The grandfather of the girl, an obscure musician, goes missing and someone, posing as a piano-tuner, ransacked their rooms. Money and trinkets were left untouched, but a number of pages were torn from Julius Anthony's diary.

Soon thereafter, the body of the musician is discovered, under very peculiar circumstances, at the Parthenon Picture Theatre.

The body of Julius Anthony was crammed inside a small cavity, "a little over a foot in height,' that can be found underneath the stage for the orchestra, which is used "as a kind of storeroom," but circumstances makes it impossible he crawled in there himself – as the body was stuffed behind a broken chair and several music stands. There is also the matter of a strange, but superficial, wound at the back of his neck and an unhealthy amount of morphine in his system. So they're very definitely dealing with a murder case.

Just as in Death in the Dentist's Chair, the investigative characters suggest Thynne was influenced by Dorothy L. Sayers, because the dynamic between Dr. Constantine, Arkwright and Manners is very reminiscent of that between Lord Peter Wimsey, Chief Inspector Parker and Bunter. For example. Dr. Constantine uses Manners for the occasional stretch of legwork, which, if I recall correctly, is similar to the way Lord Peter uses his manservant, Bunter. However, it has been eons since I read a mystery novel by Sayers and Bunter may not have had as big a role as I remember, but do I recall him playing a part in some of Lord Peter's investigation.

In any case, one of Thynne's own trademarks appears to be plots with a strong international flavor. The plot-threads from the previous book were all over the map and this one is not all that different in that regard: one of the main characters, Mr. Civita, is an Italian restaurant owner and one of his former associates is a Belgian sommelier, Mr. Meger, who's murdered halfway through the story. Dr. Constantine solved the how-part of this second murder with the assistance of a pair of Japanese martial artists. All of this gives her books somewhat of a cosmopolitan feel.

However, where He Dies and Makes No Sign differs from Death in the Dentist's Chair is a waver thin plot, lacking any real complexity or cleverness, which made the book somewhat of a chore to review. Oh, it was very well written and nicely characterized, but the plot is overly simplistic and never really delivered on its premise. Admittedly, as a whydunit, the murder of the violinist was well conceived, but I wish the who-and how received equal attention. The second, borderline impossible murder, involving a deadly fall from a window, was cleverly done, but Dr. Constantine solved that one off-page. After which he gives a demonstration of how it was done to Arkwright and the reader. So it really added not all that much to the overall plot.

Well, as you probably gathered from this piss poor written review, I had soured on the book by the time the final chapter finally rolled around. I simply expected so much more after the excellent Death in the Dentist's Chair, which was both original and clever with an effective ending. None of those qualities made an appearance in this one.

So, yeah, I'll end this excruciating blog-post by saying that this one simply did not do it for me, but take notice, the next one will take a look at a Carrian-type locked room mystery (of course!) from the early 1930s. Hopefully, that one will live up to its reputation.