Death in the Clouds (1935) by Agatha Christie

Agatha Christie is, to this day, considered to be the uncontested Queen of Crime as she understood better than most mystery writers, past or present, what makes a plot tick like a Swiss timepiece and turned the surprise twist into an art form – paradoxically transforming the least-likely-suspect into the least-likely-suspect. Christie is commonly associated with the closed-circle of suspects, iron-clad alibis and the surprise ending, but not the locked room mystery and impossible crime. Surprisingly, she wrote more of them than most realize. 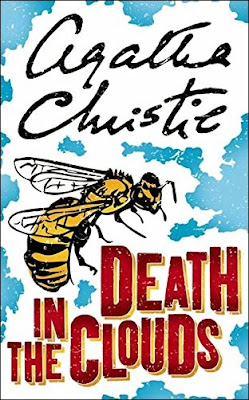 Mike Grost calls Christie "a major contributor to the form," in "quality and quantity," which discusses and breaks down most of those contributions on his website's Agatha Christie page under "Impossible Crimes." When you go over them, you begin to understand why Christie's name is not inextricably-linked to the locked room and impossible crime fiction. She was very covert about it. Brad, of Ah, Sweet Mystery, observed in 2018 blog-post, "Pondering the Impossible, Christie-style," that "most of the examples we find in Christie are not labeled impossible crimes," because "she does not wish to call attention to these situations." Usually done to obscure the murderer's identity without drawing undue attention to her carefully planted clues and red herrings with a glaring impossible situation. That's how some of her mysteries have largely gone unacknowledged, or unrecognized, as impossible crimes. Sometimes, the locked room is only a minor element (Hercule Poirot's Christmas, 1938) or simply a mere afterthought to the plot (Curtain, 1975). Every now and then, Christie declared her colors. You can find most of clearly defined impossible crimes in her short stories, like "The Blue Geranium" (1929) and "The Dream" (1937), but there's one novel in which she drew full attention to the locked room and impossible crime elements of the plot.

Death in the Clouds (1935), alternatively published Death in the Air, marked the twelfth novel-length appearance of Hercule Poirot and the first time I read it in English. I originally read a Dutch translation with a cover that spoiled the solution by putting two clues together. So my second reading was much more rewarding than my first as I realized Death in the Clouds is very John Dickson Carr-like, but not in the way you might think. More on that in a minute.

So the book opens on a hot, sun-drenched September afternoon at Le Bourget aerodrome as Hercule Poirot climbs aboard the Prometheus, to fly from Paris to Croydon, in the company of ten other passengers – who occupy the plane's rear compartment. Miss Jane Gray, a hairdresser's assistant, who won a hundred pounds in the Irish Sweep and took a holiday abroad where she met a handsome-looking man, Norman Gale. A dentist who also aboard to fly back to England. Armand and Jean Dupont are a French father-and-son archaeological team and board the plane discussing the dating of prehistoric pottery. There's the beautiful, but haughty, Countess of Horbury and her friend, the Hon. Venetia Kerr. Daniel Clancy is a writer Edgar Wallace-style thrillers and boards the plane "absorbed in the perfectioning of his cross-Europe alibi" for his next novel. James Ryder is the managing director of a cement company returning home and a specialist on diseases of the ear and throat, Dr. Roger Bryant. The last passenger is "one of the best-known moneylenders in Paris," Madame Giselle. Everyone was handling something or moving around, which all seems innocently enough on a normal flight. But, as they near Croydon, a steward discovers Madame Giselle is no longer alive!

Madame Giselle apparently died of an heart attack or had an adverse reaction to a wasp sting, which buzzed around the cabin before it got squashed. Hercule Poirot makes a startling discovery. On the floor there's "a little knot of teased fluffy silk, orange and black, attached to a long, peculiar-looking thorn with a discoloured tip." A poisonous torn, shot from a blowpipe, which had recently been dipped in the venom of the boomslang (tree snake). So how could someone have shot "a poisoned dart out of a blowpipe in a car full of people" without being spotted by either the other passengers or one of the stewards. Inspector Japp, of Scotland Yard, enters the case muttering "blowpipes and poisoned darts in an aeroplane" insults one's intelligence ("it's an insult—that's what this murder is—an insult"). And he's not the only one professing their disbelieve that a dime thriller has come to life in front of their eyes. That reminded me even more of Carr than the impossible crime element. 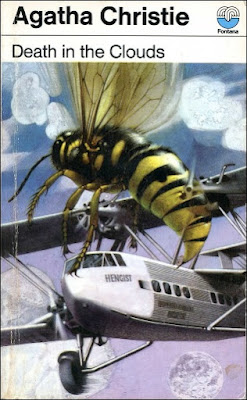 Carr often exaggerated to clarify by whittling something utterly fantastic or otherworldly back down to human proportions. You can get a picture of what I mean by comparing The Unicorn Murders (1935; as by "Carter Dickson") with John Rhode's Invisible Weapons (1938). The impossibilities are somewhat related, but Carr's a thrill-filled extravaganza, while Rhode took a more low key approach. Normally, Christie leans more towards how Rhode's handled his locked room mysteries, but here she pulled a John Dickson Carr. Only notable difference is that, instead of invoking the supernatural, Christie presented her impossible crime as the pulpiest of pulp murders. Something so extraordinary that it even left the thriller writer lost for words.

So the little grey cells get to work to try and make sense out of something of "unparalleled audacity" flying in the face of everything logical and sensible. Christie is at the top of her game here when it comes to planting clues and dropping red herrings. A particular highlight is Poirot going over a list cataloging the content of the baggage of all the suspects ("down to the minutest detail") and boldly declare that "it seems to point very plainly to one person as having committed the crime," but can't "see why, or even how." Remembering parts of the solution, I once again couldn't help but admire how Christie could simultaneously spell out the truth to reader and pool the wool over their eyes. She hammers this down in the final quarter of the story as Poirot points out and names the three central clues, which are all excellent and brilliant when dovetailed together – revealing a solution as practical as its presentation was maddening. A solution showing once more just how big of an influence G.K. Chesterton had on the plotting technique of the Golden Age generation. Only imperfection that keeps Death in the Clouds from a place among Christie's best detective novels is the contrived, gracelessly planted motive. It really felt like Christie placed a crowbar between the murderer and victim to create as much distance between them as possible, which made it harder to justify committing the murder under such fantastical and risky conditions.

Nonetheless, a second-tier Christie is still top-tier detective novel and would be considered a top-tier novel had another name been on the cover. If Stuart Palmer had written Death in the Clouds instead of The Puzzle of the Pepper Tree (1933), it would have been a permanent resident on most specialized locked room lists. So, even while the motive lacked strength, I have very little to complain about as the story was better than I remembered. It was simply fun to see Christie enjoying herself with the characters and plot. One of my favorite scenes is Poirot visiting the messy home of Clancy and is told he's going to write "the whole thing exactly as it happened" with "perfect pen portraits of all the passengers," which carries the title The Air Mail Mystery. And to dodge any libel charges, Clancy dreamed up "an entirely unexpected solution" normally found in only the murkiest of pulp magazines. What a shame Clancy never got to meet Ariadne Oliver. He could have easily replaced Superintendent Battle or Colonel Race in Cards on the Table (1936).

Death in the Clouds is a strangely overlooked impossible crime novel written by nobody less than the Queen of Crime herself and deserves to be acknowledged as a mostly very well done locked room mystery. More importantly, it's a tremendously fun and entertaining detective story that gently pokes fun at its exotic, pulpier cousins, the thriller. A showcase why the 1930s were the Golden Decade of the Golden Age.

Notes for the curious: Hercule Poirot has been accused of having been in a position to have prevented the second murder discovered in the first-class carriage of a boat train, but I can't see how. Even if he told Japp about his suspicions, he could not have acted upon it without something more substantial to go on. Poirot admitted he had no idea how this person could have done it or why. I don't think Japp would have wanted to make the murderer aware of their suspicions. Poirot was as surprised as anyone else when this person entered the picture ("why did no one mention this before?"). Only the reader was really aware. By the time Poirot begins to catch on, the wheels of the second murder was already set in motion. So you can't really pin that second murder on his conscious. There is, however, some hilarious, unintended foreshadowing to Curtain (ROT13: “zba nzv... jura V pbzzvg n zheqre vg jvyy abg or jvgu gur neebj cbvfba bs gur Fbhgu Nzrevpna Vaqvnaf”). Another interesting footnote is that a character appears in the story named Jules Perrot. I thought it was interesting as Frank Howel Evans short stories about a retired French detective, Jules Poiret, is often cited as an inspiration for Hercule Poirot.