"Martin Mons" was the shared pseudonym of two Dutch sisters, Hilde Paauwe-Monsma and Marga Wierdels-Monsma, who began their collaboration when their claim that everyone, possessing a lick of common sense, could produce a detective novel was challenged – their answer to the challenge was De carnavalsmoord (The Carnival Murder, 1951). But the story didn't end there. Over the next ten years, the Monsma sisters continued to work prodigiously on more than thirty detective novels. Hilde Monsma provided the bare-boned, skeleton structure of the plots and Marga Monsma turned her plot outlines into fully fledged mystery novels. 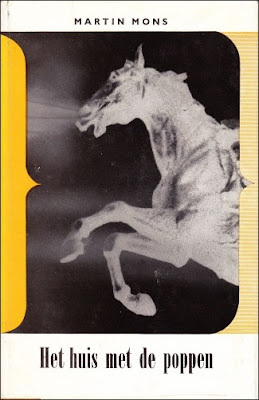 They wrote thirty-two detective novels from 1951 to 1961 and a posthumously published novel, De weegschaal (The Scales, 1964), which was originally commissioned to be part of the unfinished "Zodiac Mysteries" project.

Reportedly, the Monsma sisters were commissioned to write a Libra-themed detective story for the Zodiac series, but, when Ab Visser received the manuscript, the story turned out to be about an actual weighing scale without an atom of astrology to be found. So the manuscript was rejected and shelved until Hilde and Marga passed away within a month of each other in 1964. If you want to know more about the now obscure, hazy history of the "Zodiac Mysteries," I recommend you read my reviews of Dick A. van Ruler's Moord op een negatief (Murder of a Negative, 1963) and B.J. Kleymens' In de greep van de kreeft (In the Grip of the Lobster, 1965). I attempted a piece of genre archaeology by trying to find and putting together the missing pieces of the series, but didn't learn about Martin Mons as a contributor until recently. So the story around this abandoned series got muddled because Visser had approached more than the twelve writers he needed. Probably as a backup. But I'll return to that little genre puzzle another time.

There were thirty-two detective novels published under the "Martin Mons" name of which twenty-five were helmed by their series-detective, Chief Inspector Pieter Auguste Perquin of the Amsterdam Police. Perquin peppers his speech with French phrases, but he's more Jules Maigret than Hercule Poirot. A typical, continental police inspector largely cut from the same cloth as the leading policemen from the novels and short stories of Augusto de Angelis, A.C. Baantjer, P. Dieudonné, W.H. van Eemlandt, Josef Skvorecky, Ton Vervoort and Mika Waltari – an archetype usually more popular and successful over here than the hobbyhorse sleuth. I don't exactly know why or how it came about, but it really appears as if an official status, like a policeman or private investigator, is needed to give a traditionally-plotted detective story a fighting chance to succeed. That's not to say their official status precludes them from acting in the capacity of amateur detective. Such as the subject of today's review.

Martin Mons' Het huis met de poppen (The House with the Dolls, 1955) is the seventh title in the Pieter Perquin series and brings the Amsterdam inspector to the southern region of the country. A friend and apparently recurring character, Joost Alland, asked Perquin to come to House ter Weem. But he didn't tell him why.

House ter Weem is an "ordinary type of the moated castle" stuck on a tiny island "like an angry, chained dog on a barn yard" where the horse-faced members of the Hangst family has ruled over the village of Wemeroyen for centuries. A family who all have "long, meloncholy horse-faces" entirely obsessed and consumed with horse breeding, racing and hunting parties. Their family history and myths is littered with horses. Like the legend that the first Hangst van ter Weem was a centaur, but there's a more recent piece of family history, or myth, which exerts a dark influence over House ter Weem. 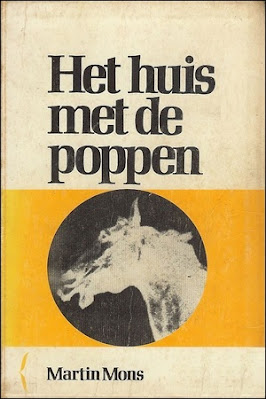 During the 17th century, the then head of the family brought home an Italian bride, Chiara Hangs, who had a new wing added to the house with statues of goddesses crowning the balustrade and earned the place its local nickname, "The House with the Dolls" – because the stonemason at the time did a terrible job. The statues do not depict goddesses, but "a bunch of sour, wicked-looking matrons without any grace" and when one of those statues falls it means disaster for the family. The second family concerns “Het Spookpaard” (the phantom horse) who appears as an enormous, shadowy beast to every Hangst whose days are numbered. Well, the family's harbinger of death is not supposed to be visible to outsiders, but Perquin gets to see it when he's barely arrived. A shrill, drawn-out screams brings the entire household to the bedroom of the baroness, Claire Hangst, who's found unconscious. While lightening strikes, Perquin sees a silhouette of "a colossal horse" with a neck like a snake's body. This is where the review nearly came to an end.

Not much else happens except one of the so-called "Dolls" toppling from the balustrade during the night and Perquin learning something might not be right with the baroness. A beloved hunting dog had been viciously ripped to pieces, a horse had gone limp and the villagers believe she dabbles in witchcraft. But very little happens until well towards the end. Perquin has a few interesting conversations with the village doctor, the priest and the acid-tongued mother of the inn keeper, which provides the story with some local and now historical color. Somewhere around the halfway mark, Perquin began to drop hints he wanted to prevent a murder instead of solving one. A morally sound position and a potentially interesting commentary on the role of the detective, but here it didn't lend itself for a riveting and lively detective story.

Fortunately, the last third of the story kicks off with a hunting party of red-clad horseman, wriggling dogs and spectators gathering in the courtyard of House ter Weem. This hunting party is used as a cover, or camouflage, to disguise a murder as an accident. While there's a clever idea at the heart of the murder, it's clumsily played out with predictable results and probably would have been more effective had the novel been cut down to the length of a short story. Another reason why the ending might not have been as effective as it perhaps could have been is that there are less than 80 pages between the start of the hunting party and the end. Those pages comprised of the hunting party, the search for the missing horseman, the discovery of the body, Perquin having a disagreement with the local policeman and finally trapping the murderer. There was more than enough room to improve and fine-tune to make the plot work, but that space was ignored in favor of padding out a short story plot to novel-length.

The House with the Dolls is a clear case of a detective novel that's better written than plotted, which makes it hard to rate it or gauge what the Monsma sisters were capable of as mystery writers. There were a few ideas here with potential, but need to read one of their more plot-oriented mysteries to see if I have found my substitute for Ton Vervoort. En toen gilde de fluitketel (And Then the Kettle Screamed, 1955) en Maar niemand gelooft mij (But Nobody Believes Me, 1960) sound kind of promising. Wordt vervolgd!