Last month, I reviewed In de greep van de kreeft (In the Grip of the Lobster, 1965) by "B.J. Kleymens," a shared penname of J. Kleijn and B. Mensen, whose only detective novel was their contribution to the "Zodiac Mysteries" – a collaborative project of twelve writers and an editor. Ab Visser gathered twelve writers each tasked with writing a detective novel in which one of the astrological signs plays a central or even decisive role. But the project was abandoned and left unfinished after eight novels. So what happened? 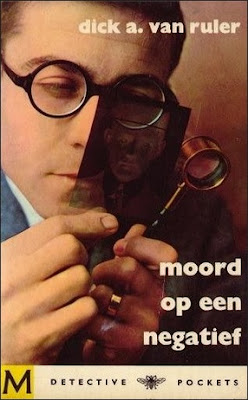 I used my review of In the Grip of the Lobster to burrow deeper into the mystery of the missing "Zodiac Mysteries." I was unable to discover why the series was abandoned or canceled, but Robert van Gulik's novella "De nacht van de tijger" ("The Night of the Tiger," 1963) from The Monkey and the Tiger (1965) was originally intended to be his contribution to the series. There's a possibility, as noted in my review, Jacques Presser's Moord in de Poort (Murder in the Poort, 1965) is another lost Zodiac mystery that made it to print. Maybe. So this left only two contributors unaccounted for.

One of them, Leon Derksen, has to my knowledge never written or published a single detective story, but the subject of today's review did put one to his name. I was more than a little intrigued by his sole detective novel on record.

Dick A. van Ruler studied theology at the Rijksuniversiteit of Utrecht in the 1950s and began to work as a journalist for the Utrechts Nieuwsblad in 1961, but gained national fame as the presenter of popular NCRV TV programs such as Hoe bestaat het – which translates to How It Exists or How Does It Work. A pop-science show from the 1960s and the second picture in this review comes from a newspaper teaser about that program. Yes, Van Ruler is pulling "the weight of eight train wagons" or "five and a half thousand times the weight of Dick van Ruler." You had to tune in that evening to learn the trick behind his incredible feat of strength. Regrettably, I've been unable to find even a few seconds of footage online.

More importantly, Van Ruler penned a detective novel around the same time, Moord op een negatief (Murder of a Negative, 1963), which the back cover tells showcases his interest in pastoral matters. Van Ruler is not so much interested in the crime solving techniques of the police as he's in those who come into contact with the police. Murder of a Negative is not about the who and/or how, but the why and the far-reaching, sometimes unforeseeable consequences of murder. So the result is a quasi-social crime novel similar to K. Abma's De hond was executeur (The Dog Was Executor, 1973) with the difference being Van Ruler tried to write something resembling a Dutch politieroman.

Before going over the story, I need to briefly return to the "Zodiac Mysteries" and Van Ruler's contribution that never materialized or remained unpublished. I didn't expect Murder of a Negative to be a lost Zodiac title, but postulated in my review of In the Grip of the Lobster it might have caught the eye of Visser and earned him a seat at the table – a guess which could be closer to the truth than I imagined. Murder of a Negative more or less, likely without intending it, low key setup a sequel in the background that could tie-in to and be part of the Zodiac series. The wife and confident of the police detective, Mary, "hung her believes and soul" on astrology (well, sort of) and knew her way around the field. She could advise her husband in a murder case involving one of the Zodiac signs. This raises a question: did Van Ruler penned a sequel that was part of the "Zodiac Mysteries" and, if he did, what happened to the unpublished manuscript? Did it survive or did it get lost or even destroyed as there was little chance of it ever getting published? Questions that will probably never get answered and this elusive, hypothetical second novel is so intangible that it can't even be entered into the Phantom Library of Lost Detective Stories. But let's get to the story. 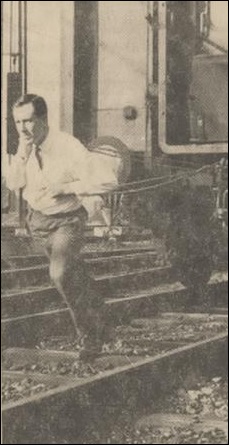 Murder of a Negative dogs the footsteps of Chief Inspector Leendert M. van Dop, of the judicial police in Utrecht (cheap pop!), who gets "de Kruit-affaire" dropped on his desk.

Johan Kruit was a valued, highly respected and pious financial manager of an import-and export company in Utrecht, De Giec, who was the first to clock in and the last to leave – never taking any vacations. When he finally took a holiday and boarded a ship with his wife to the United States, he discovered too late that his sleeping powders contained a cyanide. And he died on the floor of his cabin. Suicide is quickly dismissed by both the authorities aboard and the Americans, which made them decide to return the body and accompanying problem back to the Netherlands.

Van Dop can begin his investigation quietly and unhurried, but is getting nowhere as he's confronted with a broken, disunited family. Mrs. Kruit is silent, submissive woman who "intoxicated herself with the past" and refused to acknowledge her husband's flaws "so as not to get from the others." Namely their two children. There's a 13-year-old girl, Bertje, but she barely appears. She has a much older brother, Hans, who Van Dop finds to be an "odd boy" suffering from his "learned indifference." And he was not on the best of terms with his father. There's the problem of the two-sided, negative image of the victim.

Johan Kruit had a squeaky clean, public image of an honest, hardworking man who sat on several church and school boards, but back home he acted like "an Old Testament patriarch" who was quick to judge and hated compromises. An image that is completely shattered in the wake of his death when it's discovered he stole tens of thousands of guldens from his employer. And they're not the only victims of Kruit's financial shenanigans. Van Dop even comes across a secret mistress. So there are more than enough motives to go around.

I already said the who-and how take a backseat to the reasons behind the murder and its consequences. The murderer is not difficult to spot (ur'f ba gur pbire) and there's nothing really clever hiding behind the poisoning, which is limited to going pharmacists to ask if anyone bought some cyanide. Murder of a Negative is almost entirely focused on the why and showing how easily a situation can spin out of control. Even when someone does something horrible with the best of intentions. Some detective stories can best be compared to complicated riddles or intricate, maze-like crossword puzzles while others are character studies, but Murder of a Negative is simply watching dominoes falling down – as one bad deed leads to another ending a second murder. A death as inevitable as it's dark and tragic. So not particular satisfying as a fan of the plot-driven detective story, but readers who prefer the social and realist approach will find something of interest between its pages.

Van Ruler's Murder of a Negative is another demonstration that the Dutch detective story is all over the place, which refuses to be defined by a single school of thought or time-period. This makes finding your way not unlike groping around a pitch-black labyrinth. You take what you can get hold off and what you get is not always what you like or were looking for. Sometimes you get lucky and find a Cor Docter or Ton Vervoort. Other times you get a Bob van Oyen. Van Ruler falls into the category of interesting, but not to my liking. That being said, I did enjoy following a typical Dutch police character down all those familiar streets under the watchful eye of the Dom Tower. I just wish it had been more of a proper detective novel.