"Bob van Oyen" was the pseudonym of Jan van Beek, a Dutch novelist, who submitted his first detective novel, Na afloop moord (Afterwards, Murder, 1953), to a detective story competition, organized by A.W. Bruna & Zoon, in 1952 – winning the third-place prize and a publishing deal. Afterwards, Murder was published a year later and he wrote four more detective novels during the 1950s with cover illustrations by Dick Bruna. Van Oyen wrote two more novels in the 1960s and a handful of short stories over the following two decades.

Afterwards, Murder introduces Van Oyen's series-detective, Captain Anton Victor IJsvogel of the Koninklijke Marechaussee (Royal Military Police), who investigates cases within the army or have a link to it. A Van Wyck Mason who's actually Dutch? Let's go on a reconnaissance mission and find out! 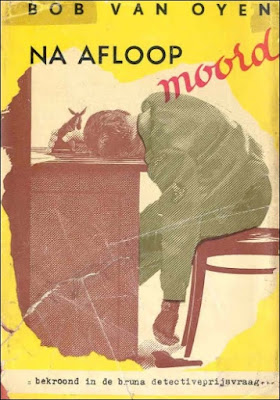 Afterwards, Murder takes place a few years after World War II, in late 1947, and is set among the engineering officers of the Genie-bureau with the primary focus on their latest recruit, Reserve First Lieutenant Joop Boerda. He concludes on his first day that there are quite some "characters" attached to the bureau, but the dramatis personae lists more than twenty names. So I'll only highlight the two characters most relevant to Boerda's involvement in the case. Reserve First Lieutenant Hajo Baerends "an intellectual and amiable man," as well as an old acquaintance of Boerda, but "any understanding of army discipline was completely foreign to him" and he has a troublesome penchant for blunders – which will place his old friend in a difficult position with personal consequences. Secondly, you have Lieutenant Kees van Straaten, "een zonderlinge snijboon" ("an eccentric string bean"), whose promising career went into a tailspin when he tragically lost his wife. But on the day he was to get the boot, Germany surprised my country with an unexpected visit and Van Straaten became a decorated war hero as he fought in the first line of defense like a madman. Van Straaten remained an eccentric character who lately seemed depressed and downcast.

Story begins to take shape, or so it seems, when several people return to the Genie-bureau following a party and not everyone returned there with angelic intentions, which leads to a shocking discovery the following morning.

Van Straaten is found slumped over a desk with "one hand clutching the heavy stone paperweight," a statuette of a donkey, while "the other hanging limply along the chair." A 9mm pistol lay beside him on the floor. Captain Anton Victor IJsvogel is placed in charge of the case, but, as he noted himself, he had no experience whatsoever with murder cases and all his knowledge came from "the Penal Code and Edgar Wallace." So now he had to decide whether the death of a Genie-officer was due to suicide or murder. And, in case of the latter, he also has to find a killer. There are enough "pesterige kleinigheidjes" ("damning trifles") to make suicide less likely than it appears on the surface.

Regrettably, there's not much else to say about the story, or plot, because it all goes downhill from here and that became only apparent after the facts! You can put that down to Van Oyen not fully grasping the concept of clueing and plotting. Only thing that can be construed as a legitimate clue is the prologue, which pretty much gives the murderer's motive away, but everything are nothing more than allusions and hints to clues that don't exist! Captain IJsvogel has two reasons to believe Van Straaten was murdered: the lights were off when the body was found and one hand clutching the stone press. So you would think you're dealing with a good, old-fashioned dying message and one that actually makes sense when you take the prologue into consideration, which added an artistic element to the story and ezel is the Dutch word for both donkey and easel – except that no explanation was given why he held it. I flipped back and forth to see if something hadn't registered, while reading, but nothing. No explanation.

Another example is when Captain IJsvogel went to French to get a name, but all that the people there could tell him that the name sounded German and it's pointed out that a lot of Dutch names sound German to non-Dutch speakers. If you look at the list of characters, there are some candidates that could be mistaken by non-Dutch speakers as German. However, if it was meant as a clue, there's one not so obvious name (Buurman) that non-Dutch speakers could hear, or be remembered, as Bormann. Once again, this made sense as it would have given Van Oyen a reason to have set the story in 1947. And again... nothing. Not a name-based clue at all.

I had worked out an ingenious theory with Buurman as the least-likely murderer, because the prologue required a soldier and Buurman is a civilian employer of the Genie-bureau, but Buurman is also a well-known, black market purveyor of alcohol, cigarettes and silk stockings – who knows what business he was involved with during the war. So my explanation is that the murder was not a revenge killing, but Buurman getting rid of a blackmailer, which would also give another perspective to the note Buurman pocketed (witnessed by Boerda). Even the massive coincidence of (ROT13) Ina Fgenngra vagraqvat gb pbzzvg fhvpvqr jura ur jnf fubg works a lot better, storywise, with my explanation. I was already preparing to congratulate Van Oyen on an enthusiastic, first stab at the detective story, but failed to fool the Mycroft Holmes of the Low Countries. Only to discover my theory was based on clues that didn't exist!

I can mention more examples that will give you the idea Afterwards, Murder is a writing exercise done by someone who wants to create a writing rhythm/schedule rather than a polished and finished detective novel. Why did that copy of Ngaio Marsh's Death in Ecstasy (1937) keep turning up? Just so Boersma would finally pick it up, read it and gets an idea that will help solve the murder? Nope. He read it and the book never gets mentioned again. Why all the fanfare to rush to the murderer and give this person an opportunity to commit suicide? Why not call in your findings and have [redacted] detained? Because that would have prevented some emotional twaddle. I don't ever want to hear another bad word about either Freeman Wills Crofts or John Rhode ever again.

Last year, I was on a hot streak with A.R. Brent's Voorzichtig behandelen (Handle with Care, 1948), C. Buddingh's Vrijwel op slag (Almost Instantly, 1953), W.H. van Eemlandt's Kogels bij het dessert (Dessert with Bullets, 1954) and P. Dieudonné's Rechercheur De Klerck en de ongrijpbare dood (Inspector De Klerck and the Elusive Death, 2020), but Afterwards, Murder was as a big a letdown as K. Abma's De hond was executeur (The Dog Was Executor, 1973). But as explained in my previous reviews and comments, finding these obscure, but good, Dutch detective novels is like groping around a maze blindfolded. There's no practical information online to help narrow down your search to certain writers, or titles, which makes picking them pure guesswork.

So, all in all, Afterwards, Murder began promising and then completely dissolved as a detective story, which makes it all the more surprising it earned third place in a detective story competition with 169 other entries. I find it very hard to believe there 166 manuscripts submitted that were worst than Afterwards, Murder. Anyway, sorry for the depressing review, but will pick something good for the next one. So keep refreshing that page!