Hester Denne Shepherd was a British book dealer who used her first-hand experience of antiquarian bookselling as a foundation stone for five detective novels, published as by "Henrietta Hamilton," which center on "bookshop murders, stolen and forged books" and "protagonists who meet in antiquated bookshops" – making her "a master of the bibliomystery." Last year, Agora Books reprinted two of her novels, The Two Hundred Ghost (1956) and Answer in the Negative (1959), as part of their (relatively) recently launched Uncrowned Queen of Crime series. 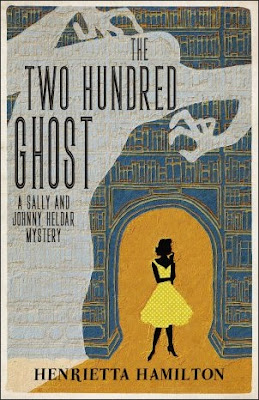 A few months ago, Laurie, of the Bedford Bookshelf, reviewed Hamilton's The Two Hundred Ghost and the title sounded mighty familiar to me. So I looked in the most obvious place, what do you know, the book is listed in Robert Adey's Locked Room Murders (1991).

The Two Hundred Ghost is the first title in the Johnny and Sally Heldar series, but in their first novel they aren't even engaged yet. Miss Sally Merton is happily employed with Heldar Brothers, Booksellers, 200 Charing Cross Road, which is commonly referred to as Two Hundred. The bookstore has been in Johnny's family since the days of his grandfather, Grand Old Man, but Two Hundred has a dark, bloody history stretching back to the early years of the 19th century when it was a pub with "a bad name" – where people where disappeared for money. Legend has it the victims were "quietly stabbed" in their bed, always in the same room, before they were disposed of. During the early 1800s, an intended victim, George Swan, woke up in time and tried to flee, but only got to the corner of the passage before "the hired bully caught up with him and stabbed him in the back."

So the ghost of George Swan began to walk from the bedroom to the passage and was allowed to walk until one of the owners, in the 1850s, had "the thing exorcised."

The Two Hundred Ghost remained dormant for a century, but, when a copy of English Ghosts turns with an account of the old ghost story, the entity begins to walk again and badly frightened the typist, Liza. She witnessed "a sort of white figure" at the corner where the passage goes round to an office, which used to be the murder room more than a hundred years ago. But when they search the place, nobody is found hiding anywhere!

Adey's Locked Room Murders described the ghostly manifestation promisingly as an "appearance and disappearance of the Two Hundred ghost in an area of an old building from which disappearance seemed impossible," but locked room readers are strongly advised not to expect too much, because the locked room-trick was hardly original 1956 – let alone in 2021. However, it didn't feel out of place in this story and the renewed activity raises the question whether someone is playing the ghost or was it stirred from its slumber by "new thoughts of murder in someone's mind." 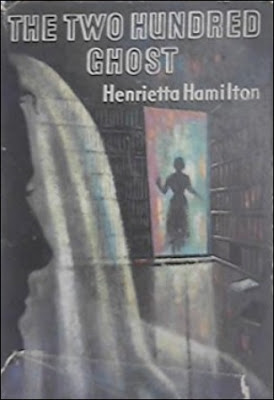 The old murder room, where the ghost was seen, is now the office of a bookstore clerk, Victor Butcher, who's neither a very pleasant person or particular popular. Butcher tried to put his hands on Sally and got into a biting argument with Fred Malling, of the Packing Department, when he came to her rescue, but there's also a poorly done attempt at blackmail and some shady book dealing in the background. So there are suspect aplenty when his body is found slumped over his desk, handle of commando knife sticking out of his back, which came on the heels of another ghostly visitation. When the youngest member of the Heldar family, Tim, gets himself in the cross-hairs of Chief Inspector Prescott, Johnny and Sally decide to turn amateur detective.

I don't know how well read Hamilton was in everyone's favorite genre, but The Two Hundred Ghost suggests to me Hamilton took inspiration from other writers with mystery solving couples as their series-detectives. Such as Delano Ames and Kelley Roos. The Two Hundred Ghost is very similar structured as their first novels, Made Up to Kill (1940) and She Shall Have Murder (1948), in which the detectives haven't yet committed until a work related homicide brings them closer together, but Hamilton had a much lighter touch when it came to plotting. She reminded me much more in that regard of Margaret Scherf and her Manhattan-decorator sleuths, Henry and Emily Bryce (like Glass on the Stairs, 1954).

So, plot-wise, The Two Hundred Ghost is not a terribly complicated affair, even with thinly-spread, none-physical clues, but it all stuck nicely together with the relationship between the victim and murderer, together with the motive, the most interesting and creative aspect of the solution. Not really a contender to anyone's crown, but a good, solid and well written second-string mystery novel that made me curious enough to toss Answer in the Negative on the big pile. To be continued...

If someone from Agora Books, or any other publishing, is reading this, I would like to suggest a series of reprint 'Till Death Did Them Part. A series reprints of unfairly forgotten, long out-of-print mystery writing couples. I already mentioned Kelley Roos, a pseudonym of William and Aubrey Roos, who were the greatest rediscovery to come out of the defunct Rue Morgue Press, but their untimely closure also put an end to their revival – which has been a great lost to us. The Frightened Stiff (1942) was their masterpiece. Last year, I discovered Gordon and Vicky Philo who wrote a handful of first-rate, classically-styled detective novels, like Diplomatic Death (1962) and Diving Death (1962), as "Charles Forsyte," but undeservedly out-of-print for decades. There are rabid locked room fans, like JJ, who would give someone's arm and leg for a reprint of Rosa and Dudley Lambert's Death Goes to Brussels (also published as Monsieur Faux-Pas, 1928 or 1937). What about Darwin and Hildegarde Teilhet's tantalizingly obscure Death Flies High (1931) and Murder in the Air (1931)? I think it would make for a terrific series of reprints and suggest it here purely for the benefit of my fellow mystery fans.