Last year, I reviewed Douglas Clark's The Longest Pleasure (1981), an odd duck of a detective novel, which blended elements of the medical thriller, scientific mystery and serial killer story and presented as a modern police procedural – centered on a manufactured outbreak of botulism. Amazingly, for a modern police procedural, the botulism bacteria emerged as the best fleshed out character of the story. 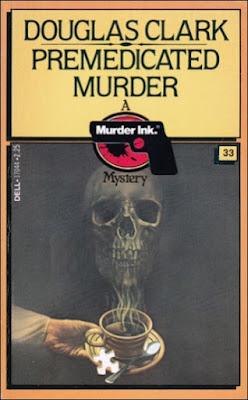 An anonymous comment left on my review pointed out The Longest Pleasure is a story where "a scientific idea is the center of idea" and "closer to being a science fiction novel than some readers might like." I was reminded of that comment when reading the subject of today's review.

Premedicated Murder (1975) is the sixth novel in Clark's series of pharmaceutical mysteries about Superintendent George Masters and Inspector Bill Green. At this early point in the series, Masters and Green can't stand the sight of one another with a "long overdue, flaming row" hanging in the air, but until the storm breaks, they have to find a nasty poisoner in "one of the most lovely villages in the commuter belt," Lowther Close. Roger Harte was a war hero who was severely injured in France, which left him crippled and a promising engineering career in ruins, but he still managed to make a living as a consultant and electric expert. And even had his own workshop where he labored on a prototype of "a mechanical heart."

Roger Harte was "the little tin god" of the village, "albeit a pleasant, benevolent sort of god," who went out of his way to help his neighbors. Such as the unpopular newcomer, Milton Rencory, who has an almost natural gift to offend the villagers. If the beloved Harte had not asked everyone to be decent to Milton and Maisie Rencory, they would have been shunned by the whole community.

On the day of his death, Harte visited the Rencorys when he began to show symptoms of poisoning, dying in their house about three hours later, which puts Rencory in a tight, prejudiced spot – reason why the local authorities called upon Scotland Yard. So who poisoned "an apparently good-hearted, popular man" and why use such a rare, slow-working poison like ricin? A toxic agent extracted from castor oil seeds and there's a chapter explaining why it's difficult to produce and hard to obtain. Very unusual to come across a case of ricin poisoning in murder cases.

The bits and pieces with the man-made heart and the poison reminded me of that anonymous comment, but the quickly recede in the background to make place for a much more straightforward detective story.

Masters and Green begin dragging-the-marsh and interview everyone involved about the universally beloved Harte and the cordially disliked Rencordy, which revealed a delightful array of bizarre clues. Such as the snowy reception on a brand new TV set, a sealed hedge gate, a garden trash fire, a rubbery smell and a very subtle, low-key kind of kindness. Some of these clues a very nasty, double-edged clues that cleverly utilized to hide the murderer from the reader and the nicely done twist at the end didn't over strain credulity, which can be put down to the clueing – demonstrating Clark was the genuine article. A man out-of-time who would have been more at home in the 1930s than '70s or '80s and slipped through the filter by disguising his traditionally-plotted, Golden Age-style detective novels as police procedurals with a pharmaceutical gimmick tacked on. And it worked!

There are, however, two minor imperfections that makes Premedicated Murder not quite as good as Death After Evensong (1969) or even the very late Plain Sailing (1987). Premedicated Murder is closer to a novella than a novel with only seven relatively short chapters, which prevented the story and plot to develop to its full potential. Not every single clue is handled with the same skill, or attention, as others and kept my attention on another possibility suggested by the clues that were given more consideration. Yes, I completely failed to spot the murderer. Secondly, there was a four-year gap between Premedicated Murder and its predecessor, Sick to Death (1971), which would explain why the story was so rough, unpolished and so much shorter in length than his other novels.

Nevertheless, if Clark wrote Premedicated Murder as a warmup exercise to knock off the rust of a four-year hiatus, it's an impressive flexing-while-stretching tune-up act and can understand why it was recommended to me several times. A small, flawed gem of the British village mystery novel and comes recommended unless you're new to the series. In that case, I advise you to begin with Death After Evensong.