Edward D. Hoch's "The Spy and the Snowman" originally appeared in the November, 1980, issue of Ellery Queen's Mystery Magazine and is the 41st short story in his long-running, espionage-centered mystery series about the head of the British Concealed Communications department, Jeffrey Rand – a code-breaker who appeared in nearly 85 stories published between 1965 and 2008. So the hook of the series is breaking and deciphering coded messages, but, like so many of Hoch's series-characters, every now and then Rand came up against an impossible crime. 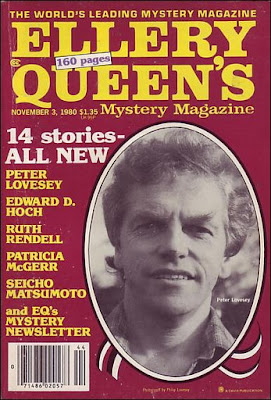 Robert Adey's Locked Room Murders (1991) tantalizingly described the problem in "The Spy and the Snowman" as a murder in one of the smallest, most crammed locked rooms on record. You know me. That's more than enough to catch my full attention.

"The Spy and the Snowman" opens with Jeffrey Rand, now retired, meeting with Hilda Nelson, who's the daughter of an old nemesis, in the lobby of a London hotel during "the snowiest January in many years." Hilda has a particular strange story to tell to the former spy master that could be "a national-security problem." She lives comfortably in a gardener's house, in Swindon, bordering on a secured estate that will host a NATO foreign ministers' conference later in the week. Two nights ago, Hilda noticed from her bedroom window that someone had built a snowman a hundred yards from the main house, but the next morning, the snowman had disappeared without a trace and there was no thaw – so it couldn't have melted away during the night. Hilda asks Rand to come out of retirement to investigate the peripatetic snowman.

So is there "a snowman spying on the NATO conference" or is Hilda trying to lure Rand into "a trap of some sort" with a wild story she knew would intrigue him?

Rand contacts an old friend to arrange a covert stakeout of the estate and, lo and behold, they see someone, dressed in white to blend with the snow, crawl inside the obviously hollow snowman and began to inch towards the house. When they pounced on the snowman, they discover a dead man inside with a bloody neck wound and a blood-covered knife next to him! The equipment discovered on the body confirms they're dealing with a dead spy, but it's "either suicide or a damned strange murder" because he was stabbed inside the snowman and there were no footprints to account for the presence of a murderer.

"The Spy and the Snowman" is a fine example of Hoch's mastery of the short detective and impossible crime story who dealt a more than fair hand when it came to clueing, which strengthened and reinforced the sealed snowman-trick – as the trick is at its core a bit of a throwback. Some of the clues, and one in particular, turned it into a minor gem and loved how disposing the obvious, John Dickson Carr-like solution didn't remove the story from Carr territory. How the murder came to be viewed as an impossible crime was a thing of beauty!

Needless to say, I very much enjoyed reading this unusual, but very well done, blending of the locked room mystery with the Cold War spy tale and is another Hoch short story, like "The Case of the Modern Medusa" (1973) and "Circus in the Sky" (2000), anthologists should keep in mind for any future impossible crime anthologies.