Micki Browning is an FBI National Academy graduate who learned that police work is as much about documenting crime as it's about fighting it and now draws on her first-hand experience as "wonderful fodder for her current career as a full-time writer," which began with her award-winning debut novel, Adrift (2017) – a modern thriller that normally falls outside of my scope. Brian Skupin listed Adrift in Locked Room Murders: Supplement (2019) with two intriguingly described impossibilities during a diving expedition and Charles Forsyte's Diving Death (1962) intrigued me enough to search out more of these submerged locked room mysteries. So here we are and, while I was a little skeptical beforehand, Adrift defied expectations by not being an ultra-modern, character heavy thriller with some mild impossible crime elements.

There are still some notable modern touches to the characterization and storytelling, but the end result can best be summed up as Scooby Doo for grownups! It certainly is an interesting addition to Forsyte's Diving Death, Joseph Commings' 1953 short story "Bones for Davy Jones" (collected in The Locked Room Reader, 1968) and the Detective Academy Q 2003 episode The Case of the Locked Room Mystery at the Bottom of the Sea as an example of that rare impossible crime story set among divers.

Adrift introduces Browning's series-detective and marine biologist, Dr. Meredith "Mer" Cavallo, who recently returned from a research project in the Arctic, but new research opportunities remained elusive and she took a job in the Florida Keys – teaching scuba diving and acting as first-mate to Captain Leroy. Story begins with the first of three (not two!) impossible situations. Mer saves a diver who's frightened out of his wits and claims to have seen a ghost, "green and kind of see-through" shaped "like a man," but the truly inexplicable part is that he was exploring the shipwreck of the USS Spiegel Grove and was fished out of the Molasses Reef. Five miles away with "the current's going in the wrong direction" and they were radioed that a diver had gone missing off the Spiegel. So how could the distressed diver travel five miles from the Spiegel Grove to Molasses Reef without "the use of teleportation, a TARDIS, or a wormhole."

The rescue and the diver's rambling is filmed, uploaded to social media and goes viral, which brings "a boatload of ghost hunters" to the Florida Keys to investigate the now most haunted spot in America.

Ishmael Styx, of Spirited Divers Paranormal Scuba Team, arrive shortly after the incident to film a documentary about the ghost of the Spiegel Grove for the Expedition Channel and they want to charter a boat for multiple, nighttime trips to the wreck – asking Mer to serve as a safety diver on the trips. The diving scenes is what makes the book stand out and excellently used the USS Spiegel Grove, purposely sunk in 2002 to make an artificial reef, as a setting for two ghostly impossibilities. Firstly, when they're inside the wreck, the underwater camera malfunctions and continues to strobe during which Styx vanishes. A subsequent rescue search of Spiegel Grove recovered his mask and a member of the paranormal diving team saw him looking at "the opening in the side of the ship," like "something scared him," before "something pulled him into the hole." Secondly, Mer returned to the wreck later in the story and witnesses the ghost with her own eyes, "green and hazy," lifting an arm and pointing at her, which is a blow to her rational, naturalistic and scientific understanding of the world. Someone who firmly believes "paranormal activity falls into the realm of pseudoscience" and "only one step above nonsense." Now the whole sordid case tied her good name to ghosts, mermaids and other supernatural phenomena. 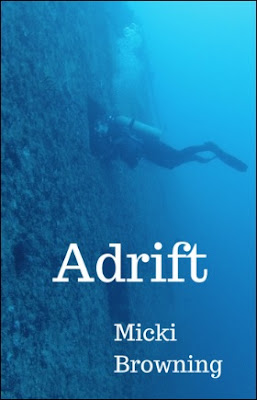 Mer is practically dragged into the case to act as an amateur detective. She agrees to continue working on the documentary to spare her friends and colleagues a wrongful death-suit. When she nearly gets killed, the case became her business (and she has a point there), but that places her at odds with the police.

The scenes that take place on the surface, which is most of the story, show those previously mentioned modern touches to the characterization and storytelling. Such as an old summer fling of Mer, who has a secretive backstory, reentering her life and a traumatic, near-death experience as a child that convinced her there's nothing beyond the grave ("I've been to the other side. There's nothing there") or learning that Mel has a CD collection of movie soundtracks – which I understand is a trope of the contemporary crime novel. However, I liked Mer's clashes with a snooty news reporter or learning how to take fingerprints by watching YouTube videos.

Fortunately, these scenes never turn into overwritten, angst-ridden mini-biographies of the characters that push the plot aside. The primary focus of Adrift is always the ghostly activities at the shipwreck and the characters directly involved with it.

So how well does the plot stack up? You shouldn't expect a neo-orthodox detective story with sharp, multi-faceted clues and treacherous red herrings. The clueing is pretty crude and the leads to some of the most pertinent questions are not treated, or discovered, until very late into the story. Nevertheless, the seasoned armchair detective has no need for in-depth clueing to figure out what exactly is happening, because the biggest accomplish of Adrift is finding a modern, updated garb for an age-old trick. A trick that needed a more experienced hand to have pulled it off more convincingly.

I know all of this sounds like Adrift was a bit of a letdown, but quite enjoyed this diamond-in-the-rough with some interesting and promising aspects. I also found it very promising Browning leaned much more towards the traditional detective story than the modern crime novel. A good example are the fuzzy details surrounding the body Mer discovers at a seedy motel, which is not as important to the plot as the ghostly activities and impossibilities surrounding the shipwreck.

Adrift is a spirited first attempt to find a balance between characterization and plot and the classic and modern style of the genre. So readers of my blog are advised not to expect a modern incarnation of the Golden Age detective novel, but it's a fast, enjoyable and promising read with some excellently written diving scenes – reminiscent of Allan R. Bosworth's Full Crash Dive (1942) and Forsyte's Diving Death. Browning is very much a writer to keep an eye on because she might turn out to one of us (we accept her, we accept her, one of us, one of us). Interestingly, the last chapter of Adrift sets up its sequel, Beached (2018), which takes a plunge into the watery world of nautical archaeology. You can expect a review of that one sometime in the not so distant future and, hopefully, it will confirm that we have another James Scott Byrnside, P. Dieudonné or Robert Innes on our hands.