The Case of the Curious Client (1947) by Christopher Bush

Christopher Bush's The Case of the Curious Client (1947) is the 32nd Ludovic Travers novel and it is, as it says on the tin, a curious case with an interesting take on the WWII-themed mysteries and can be grouped with the British postwar WWII detective novels – a period of austerity, social malaise and a crumbling empire. However, the plot is rooted in the rise of Oswald Mosley's "Blackshirts" in the 1930s when the South Coast of England was "a hotbed of Fascism." So it was fascinating to read a detective novel built around the periods bookending the Second World War. 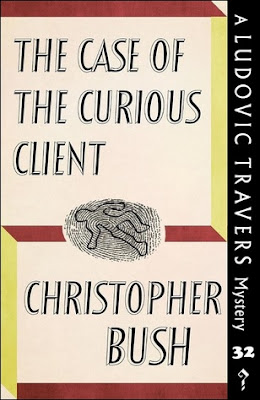 The Case of the Curious Client opens on Guy Fawkes Day, 1945, which is the first one to be celebrated with bonfires and fireworks since the war started and the papers were full with "the old pre-war kind of gossip about the Bonfire Boys of Lewes and the South Coast." A fact that will function as one of the hinges of the plot.

At the time, Ludovic Travers is still learning the ropes of the private eye business from Bill Ellice, of the Broad Street Detective Agency, and is holding the fort when the agency receives an urgent telephone call from a prospective client. Herbert Dorvan wants the detective agency to track down his nephew, Robert Dorvan, who had recently returned to England as a "prisoner of war in Japanese hands," but never got in touch with his uncle and he needs him "as a sort of bodyguard" – because he believes his life is in danger. There already had been attempt made on his life. So they schedule an appointment at the Southern Hotel that afternoon, but, when Travers arrives, Dorvan has already returned home. He left behind a note asking Travers to meet him in two days time at the village of Midgley.

Midgley is situated very near the southern English coast, but Travers, once again, never gets to see his client. Not alive anyway. Travers finds the house locked up with a note pinned on the door, "away till Wednesday," but naturally, he doesn't trust the situation and eventually has the local police break open one of the doors. What they find inside is Dorvan, lying in the living room, with a bullet in his head! Dorvan had been dead for some days and it seems his murderer had used the "squibs and fireworks" of Guy Fawkes Night to hide the sound of the gunshot.

I've to mention here that The Case of the Curious Client is, perhaps, the tidiest and clearest of Bush's late 1940s novels with a relatively simple and straightforward that would have been better fitted for a short story, or novella, but Bush managed to get a whole novel out of the plot – which he accomplished without any needless padding or stretching. For example, there are only three suspects to consider (a who-of-the-three type of detective story I've come to associate with Gosho Aoyama). All three are nephews of the victim. There's the previously mentioned Robert Dorvan and his half-brother, Sidney Dorvan, who's the owner of a London nightclub, the Ginger Cat. Gerry Bruff is a radio-impressionist with his own shown on the BBC.

However, Robert, Sidney and Gerry all have alibis, some better than others, but what they lack is a strong motive, because there was very little money coming their way. So could the motive for Dorvan's murder be hidden somewhere in his questionable, pre-war activities?

During the 1930s, Dorvan blamed the ruination of his furniture business on "Jewish undercutting” and "declared war, as it were, on Jews in general." Dorvan had a sign on his door, "NO YIDS NEED APPLY," but also contributed funds to the British Fascist Movement, spoke at meetings and "recognised as one of the big men by those in the know." When France fell to the Germans, Dorvan was interned under Defense Regulation 18B, his business was closed down and his nephews, who were close associates, were out of a job too. 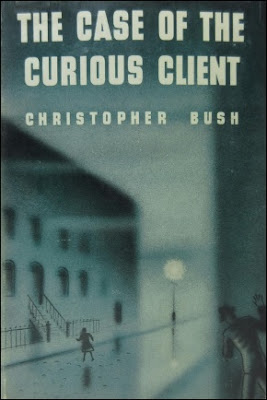 So, yeah, this is really neat and tidy whodunit and you can put together the whole puzzle before the explanation is given, certainly after the second murder and a £200 clue, but it's not too obvious at the start of the story. You need to do some puzzling to reveal this person, which is not bad when you only have three suspects to work with. The Case of the Curious Client has other bits and pieces that added interest to the story.

In his 1950s novels, like The Case of the Counterfeit Colonel (1952) and The Case of the Flowery Corpse (1956), Bush began to show an interest in forensics and technology as tools of the law, but he already played with it here. Travers takes part in a "bugging" operation of the Ginger Cat and the floor over the nightclub is secretly taken over, "requisitioned by a Government Department as an overflow for old documents and correspondence," where a microphone has been placed under the floorboards and them listening to the fragments of conversation coming through the earphones is hands down the best scene in the book – even if it's not exactly ethical. And at the scene of the second murder, the police has "a temporary telephone" installed to better coordinate the investigation. I don't remember ever having come across one of these temporary telephones in detective fiction, but it makes sense to do so and wonder if these were ever actually used or something Bush imagined would be a good idea.

However, the absolute highlight of the story is the return of the Old General of the Yard, Superintendent George Wharton, who had lost of him luster in the 1950s titles (looking old and tired), but he was his old self again here. Wharton is a showman and a master of his craft who "disguises his height with a stoop" and dons antiquated spectacles for his own "obscure and deceptive purposes." A pure showman whose "sleeves are crammed with innumerable tricks" and "his personality alert with innumerable disguises to be assumed on each apt occasion," which makes him a perfect contrast to his more introspective and theoretical friend. Travers has "the crossword kind of brain" that "loves problems and is quick to find solutions," but his "fluent theorising" is not always correct (one out of three theories) and this can count on some good-natured mockery on Wharton's part. Although he's already too willing to assimilate such theories when they're proven right. They play off each other so well when they're both at the top of the game and, more than once, Wharton beat Travers to the solution, which adds a whole different layer to this series.

I've said this in my review of The Case of the Platinum Blonde (1944), but I'll say it again: nobody else, past or present, nailed the relationship between the (quasi) amateur detective and the professional policeman as perfectly as Bush did with Travers and Wharton. I think it's not too late for modern mystery writers to learn a thing or two from Bush.

So, all in all, The Case of the Curious Client is not one of the most complex novels in the series, but it's a tidily written, competently plotted detective novel with Bush getting more out of the story than what was put into it. Something that only very rarely happens with detective stories, but this is one of those rarities. A must-read for dedicated fans of the series or readers with a special interest in WWII-themed mysteries.