Back in 2016, I put together "A Selection of Lost Detective Stories," briefly going over the lost or unpublished manuscripts by Anthony Boucher, Joseph Commings and Hake Talbot, but the post included a grainy, black-and-white photocopied cover of an unknown detective novel – entitled The Problem of the Black Road by Philip Jacoby. The cover appeared in a 1980s fanzine, Collecting Paperbacks, as a recently unearthed, long-lost locked room mystery by John Dickson Carr! 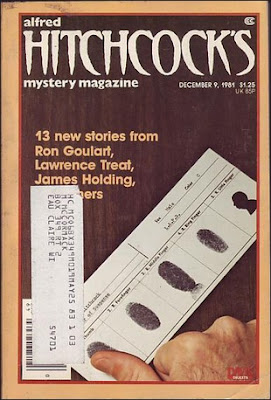 Unfortunately, the unknown, long-lost novel turned out to be a hoax, perpetrated by Bill Pronzini, to see if he could fool collectors into believing he found a remnant of an obscure, short-lived wartime paperback outfit. One man saw through the deception, Edward D. Hoch, who decided to use the premise of Pronzini's imaginary novel for a short story with G.K. Chesterton playing the role of Great Detective.

"The Bad Samaritan" originally appeared in the December, 1981, issue of Alfred Hitchcock's Mystery Magazine and came as a separate pamphlet with each of the 230 numbered, signed and cloth-bound copies of Hoch's More Things Impossible: The Second Casebook of Dr. Sam Hawthorne (2006).

The story is narrated by Jack Foxx, which some of you might recognize as one of Pronzini's pennames, but this Jack Foxx is a small-time booking agent who arranges lecture tours for evangelists, authors and political figures. When the noted British author G.K. Chesterton came to America, in 1921, he was asked to handle the southern and western ends of his lecture tour. So the man who gave the detective story a soul arrived in Nashville, Tennessee, closely followed by "a phantom circus with a killer clown."

Chesterton is with Foxx when the latter is greeted by an old friend, Sergeant Troy, who asks Foxx to come with him to the hospital. There's been an accident out on Jericho Road, which left Mike Osher dead and Tom O'Neill in bad shape. However, it wasn't an accident and Tom told the police "the damnedest, most bizarre thing" they ever heard. According to Tom, their car was forced into a ditch, tipped over and rolled down the embankment, but, when he regained consciousness, he heard circus music, wagons and elephants trumpeting – a circus parade was coming down the road. So he yelled for help and "a sad-faced clown," in a baggy suit and "big drawn-on red lips," who shoots them both before "scurrying back up the hill to the road." A circus recently arrived in town, but they didn't travel over Jericho Road.

Naturally, the problem of the black road intrigues Chesterton. What fascinates him the most is not the clown, "merely men with painted faces," but "the curious behavior of the elephants in the nighttime" and it leads him to a paradoxical conclusion. Since "the railroad and the circus people are telling the truth" about the circus not being on the road that night "proves O'Neill told the truth" about the clown and circus parade. A statement followed by a perfectly logical and acceptable explanation with the only caveat being that it can only be considered an impossible crime story within its early 1920s setting. I don't think you can use such a trick with a modern setting and still present it as an impossible crime.

Hoch wrote "The Bad Samaritan" as a pastiche-by-stealth of Carr and I don't know if this was done by accident or design, but plot is of the type Carr used for the radio-plays he wrote in the early 1940s for CBS's Suspense. I can easily imagine "The Bad Samaritan" as a radio-play and it would work beautifully. So a good detective story with a fascinating backstory and exactly what I needed after my previous read.

A note for the curious: Jon L. Breen satirized Hoch in "The Problem of the Vanishing Town" (1979) and referenced a fantastical, unrecorded locked room murder in which a clown was torn to shreds by an invisible lion in a high rise building, but it took Hoch more than twenty years to come up with a solution to the problem – which he wrote down as "Circus in the Sky" (2000). That's two great stories Hoch penned based on a joke. What a shame he never did anything with Carr's fabled The Bronze Devil. Coming up with a rational explanation for a ghostly circus parade is peanuts. A murderous, non-corporeal circus animal vanishing from a high building is a tougher nut to crack, but it can be done. How do you explain a man who was drowned and decapitated in a locked tower room and lived to tell Dr. Gideon Fell about it?