The Derek Smith Omnibus (2014) is one of the most important publications to have come out of John Pugmire's Locked Room International as it collected the classic locked room novel Whistle Up the Devil (1954), the exceedingly rare Come to Paddington Fair (1997) and the previously unpublished Model for Murder (1952) – a long-lost contribution to the massive Sexton Blake Library. Pugmire speculated Smith's Model for Murder was probably "too cerebral for the audience" and thought it very unlikely I would ever read another Sexton Blake novel or short story.

Less than a year later, I came across an anonymously published short Sexton Blake story, "The Grosvenor Square Mystery" (1909), which turned out to be a surprisingly decent locked room mystery for the period. Suddenly, I began to notice how many Sexton Blake novels and short stories were listed in Robert Adey's Locked Room Murders (1991). One title in particular beckoned my attention. 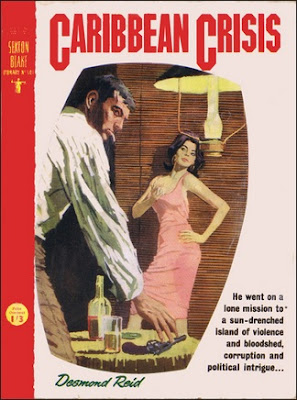 Caribbean Crisis (1962) is a novella, a chapbook really, representing the first published work by noted science-fiction and fantasy author Michael Moorcock, which he co-wrote with Jim Cawthorne and published under a house name, "Desmond Reid" – a name that was shared between at least thirty authors for SBL. Adey's Locked Room Murders described a fascinating impossibility concerning a murder and disappearance from a submerged bathysphere (diving bell)! I also found it interesting Caribbean Crisis was published in the same year as Charles Forsyte's Diving Death (1962).

I naturally tempered my expectations, as it would be unfair to expect something along the lines of Joseph Commings' "Bones for Davy Jones" (collected in The Locked Room Reader, 1968), but the presentation and explanation to the impossible murder and disappearance were unexpectedly good. Something that deserved to have been in a better (detective) story.

Caribbean Crisis opens on the research ship of the famous "boy-professor" and marine biologist, Hoddard Curtis, who perfected a new kind of bathysphere and is ready to explore "the deepest marine valley known to man." Curtis hopes to find evidence at the bottom of the Tanangas Deep of "a prehistoric fish," or creature, because stranger things have been found in the lower ocean ("fragments of bone and scales the size of dinner plates"). So he spent years and thousands of dollars to find out what "lurks down there unknown," but, the moment his dreams began to be realized, tragedy struck in the most unexpected way.

During his time away from the research ship, two of his assistants, Jules Harben and Jim Linwood, took the bathysphere for "a joy-ride in the deep," but, when they reached a depth of seven hundred feet, the radiophone began to crackle with frantic calls to pull them back up – in between screams of "it's awful" and "it's going to kill us." Shortly followed by unearthly sound, like "the bellow of some enormous sea-beast erupted from the ocean," and the bathysphere being torn from the fine, woven cords of steel. The bathysphere began to sink to the bottom of the Tanangas Deep! But it gets better.

Curtis puts on a large, heavy and untested deep-sea diving suit in an attempt to find his brainchild and this diving scene is the best one of the story. Miraculously, the damaged bathysphere is resting on a rocky ledge and can be salvaged, but, when Curtis shines his torch through the porthole, he discovers "one of its two occupants had disappeared." The body of the other man was floating in the sphere with a knife in his back! The hatch could not have been opened, or closed again, at that depth and the pressure would have killed anyone who tried to escape the sphere. And the newspaper called it "a mystery worthy of a Holmes or a Blake."

What a marvelous and original setup for a double barreled impossible crime story with a diving bell serving as a claustrophobic sealed room slowly descending into a silent, alien-like world of slime-green, swirling darkness where only God knows what may be lurking – ready to strike at anyone, or anything, disturbing its peace. I truly wish the name on the cover had either been Theodore Roscoe or Hake Talbot. The premise and locked room-trick would have turned into gold in their hands!

Unfortunately, Caribbean Crisis is not that kind of detective story. Sexton Blake reads about the bathysphere mystery in the newspaper and makes a personal inquiry, but what brings him to the island Republic of Maliba (where the ship is anchored) is a rich client. Sir Gordon Sellingham is a sugar millionaire who owns "a great deal of the Maliban sugar industry," but the current, potentially explosive political situation in the Caribbean is threatening both his business and his idealistic son. Peter Sellingham is using his mother's inheritance to bankroll a rebel group who want to overthrow the government and there might be a communist element to the impending rebellion.

Blake is not only a private detective, but also a Special Service Operative of the British government and it falls on him to prevent "a repetition of the Castro business in Cuba" and stop Maliba from becoming another Russian satellite. So the poor man's Sherlock Holmes becomes some kind of Poundland James Bond as he goes undercover as an insurance investigator and gets caught in a three-way dance between the government of Present Nonales, the rebel outlaws in the hill and communist infiltrators – tangling along the way with double agents and dodgy allies. I can't say these chapters were a chore to read, but the Cold War spy thriller is not my kind of crime fiction. I love pure, undiluted detective stories crammed with double-edged clues, treacherous red herrings, dying messages and locked rooms solved by either competent policemen or a clever amateur.

For me, the only time Caribbean Crisis came close to matching its opening chapters was Blake's explanation of the miraculous murder and disappearance, "when the impossible has been eliminated, what remains must be the truth," which turned out to be so much better than expected. A good, fairly original idea that was wasted on this otherwise run-of-the-mill, Cold War-style pulp thriller.

So, on a whole, the first chapters and locked room-trick had all the ingredients and potential necessary to craft a classic, timeless detective novel, but Caribbean Crisis allowed all of that to go to waste and therefore can only recommend it to the fantastical locked room reader as an interesting curiosity.