Several years ago, I reviewed Whistle Up the Devil (1954) by Derek "Howe-Dun-It" Smith, a beloved book collector and crime-fiction enthusiast, who wrote a handful of detective novels in the vein of John Dickson Carr – which were consigned to obscurity for over half a century. As obscure as the book may be, Whistle Up the Devil has always enjoyed a solid reputation among the connoisseurs of the impossible crime stories and could be obtained on the secondhand book market. But its sequel became one of the scarcest collectibles in the genre. 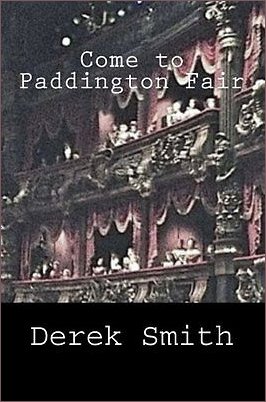 Smith failed to secure a publisher for his second Algy Lawrence mystery, Come to Paddington Fair (1997), but a Japanese collector, Mori Hideo (?), took the manuscript home and financed a limited print-run of less than one hundred copies – published by Murder by the Press in English. So you could, technically, get hold of a copy, but I assume the book was not widely read upon its initial publication. Still, I bet collectors had an easier time acquiring one of these limited editions than finding copies of Ayresome Johns' Pattern of Terror (1987) and A Spectre-Room of Fancy (1989).

John Pugmire of Locked Room International rescued Smith from the dreaded fate of biblioblivion and published The Derek Smith Omnibus (2014), which consisted of three novels and one short story. As well as an introduction by one of the genre's most noted locked room experts, Robert Adey, who knew Smith personally. A year later, Pugmire published Whistle Up the Devil and Come to Paddington Fair separately. However, the third novel from the omnibus edition, Model for Murder (1952), was branded by reviewers as mediocre and was not reissued by itself.


But all of Smith's impossible crime fiction is finally available and the twosome of Algy Lawrence mysteries are a feast for everyone who loves traditional detective stories.


Come to Paddington Fair is dedicated to the memory of John Dickson Carr, "Lord of the Sorcerers," but the structure of the plot resembles the work of another Golden Ager, namely Ngaio Marsh, who was the undisputed Queen of the Theatrical Mystery and wrote a score of detective stories set in the spotlight of the stage – such as Enter a Murderer (1935), Swing, Brother, Swing (1949) and Off with His Head (1957). However, the book (IMHO) still qualifies as an impossible crime story, but Algy and Chief Inspector Castle do not realize, until right before the end, they were trying to solve "the mystery of yet another crime which couldn't possible have been committed."

So we have an impossible crime novel posing as a Marsh-style theatrical mystery, but the opening of the book tore a page from the hardboiled playbook.


Richard Mervan is a low-grade bank clerk and one who briefly became a hero when he fought off a street mugger, which left him with a blood-stained shirt and a sore neck. His assailant attempted to snatch his briefcase, belonging to the bank, but Mervan never felt his employers appreciated what he did and this planted the seed for an audacious crime – which ended with a stretch in prison for looting the bank's strong-room. And his capture and imprisonment was the result of a double-cross by his partner in crime and love interest, Miss Lesley Barre. This made Mervan very, very resentful and a bit murderous.


Chief Inspector Steve Castle pays a visit to Mervan in his prison cell and offers him a final opportunity to come clean, because he likes "to tie up all the loose ends neatly." Castle knew he had an accomplice, who betrayed him and took the money, but Mervan refused to take a reduced sentence in exchange for the whole story and this worried the inspector. He knows the prisoner is a broken man with an obsession and that makes him very dangerous. However, Mervan remains stalwart in his silence and only the readers hears him muttering an oath that he'll find and kill Lesley.

Skip ahead several years and Castle received and Castle received, anonymously send, "tickets for the matinee at the Janus," which are for a mystery play, entitled The Final Trophy, but the theatre tickets came with "a curious message" printed on a piece of pasteboard: "COME TO PADDINGTON FAIR." So he consults Algy Lawrence, a bright young man with "lazy blue eyes," who gained a reputation as an amateur detective and they decide to attend the play. However, the play was given a slightly different ending by the hand of an unknown murderer and this person effectively gave them a front row seat to the on-stage murder of the lead actress, Lesley Christopher.


During the third act, the character played by Lesley, "Marilyn," is shot by "Regan," played by Philip Trent, but this time a real bullet struck her in the chest and laughter is heard coming from one of the theatre boxes – as "the lights faded in a complete black-out."

Luckily, Algy immediately sprang to action and helped apprehend Mervan. He was the one who laughed and found to be in possession of the proverbial smoking gun, but the case is not as easily solved as all that. The fatal bullet was not fired with Mervan's gun and this forces the detectives to poke around behind the stage-set, because it seems that someone had tempered with the stage revolver. Someone, "an unknown hand," had taken out the blank cartridges and had "filled it with six shiny messengers of death."


So one of the main questions is who was in a position to switch the blanks for live rounds, but they also have to wade through the undercurrents and cut a pathway through the dense web of cross-relationships dominating the world behind the stage – which keeps them both occupied for the better part of the book. Once they removed all of the extraneous matter, they're confronted witness who turns this fairly strange shooting into "a dark miracle." It was an impossible crime all along! Several pages later, the reader is confronted with an Ellery Queen-style "Challenge to the Reader," which is a request to the reader to "PAUSE FOR REFLECTION" and "play the great game of WHODUNIT? and HOW?"


The final twist, that turned this into an impossible murder, is very clever and tricky, which showed Smith's talent for crafting multi-layered plots, but I was able to (roughly) work out how the shooting was pulled off – because the shooting resembled an impossibility from one of Carr's stage-plays from the early 1940s (c.f. 13 to the Gallows, 2008). Whereas Carr's trick is simple and elegant, Smith opted for pure intricacy and got a lot of mileage out of it.


Granted, the impossible angle should probably have been introduced earlier on in the story, but regardless, the book is an excellent specimen of the theatrical mystery and the impossibility should be seen as the cherry on top. Only thing that can be really said against Come to Paddington Fair is that it doesn't bat in the same league as its predecessor, Whistle Up the Devil, but both novels make you mourn the fact that Smith was never allowed to expand the series pass those two superb mystery novels.


Finally, if you, like me, enjoyed Come to Paddington Fair, you might find the following theatrical mysteries equally appealing, because they also happen to feature a locked room problem:  Christianna Brand's Death of Jezebel (1948), Ngaio Marsh's Off with His Head, Herbert Resnicow's The Gold Deadline (1984), The Gold Curse (1986) and The Gold Gamble (1989).

By the way, the title of this blog-post is a reference to another theatrical mystery. Can you guess which novel I'm referencing?

So far this blog-post and I'll try to pick a non-impossible crime story for the next one.
Geplaatst door TomCat on 11/03/2016