Scared a Lot in Camelot

"Don't you get any foolish ideas that magic will solve all your problems, because it won't."
- Merlin (The Sword in the Stone, 1963)

Richard Hunt is the author of seven Detective-Inspector Sidney Walsh mysteries and a pair of standalone novels, but otherwise, precious little is known about him.

The back flap of Deadlocked (1994) briefly describes Hunt as "an accountant with a special interest in violin making" and lived at the time of publication in Norfolk, England, which is the only verified information I can share with you. However, I also found a Wikipedia page for a Richard Hunt, a magazine editor and green activist, who has several of his non-fiction books listed on the same GoodReads page as the Sidney Walsh series – which suggests they're one and the same person. One clue supporting this assumption are the animal rights activists who play a minor role in Deadlocked.

Even so, this could very well be an understandable mix-up, because there are likely more than just one Richard Hunt's traipsing around the British Isles. So, with Hunt's introductory out of the way, it's time to take a closer at one of his detective novels. 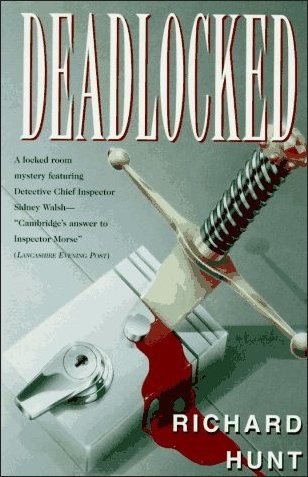 Deadlocked is Hunt's fourth piece of crime-fiction and the second case for Detective Chief Inspector Sidney J. Walsh of the Cambridgeshire Constabulary's CID, which is, as you probably guessed, an impossible crime novel, but the plot also has an Arthurian theme that can be found in two recently reviewed locked room novels – i.e. Paul Halter's Le cercle invisible (The Invisible Circle, 1996) and Richard Forrest's Death at King Arthur's Court (2005). So did I stumble across a forgotten sub-category of the locked room mystery? Anyway...

Dr. Arthur C. King was a research scientist for PZB Testing Ltd, where they test "the long-term effects of drugs, medicines, and pesticides," which once used live animals, but have since substituted their guinea pigs for body tissues. Regardless, King has received a number of death-threats pertaining to his research work and the police advised him to upgrade his home security. Well, the unpopular researcher has a "mania about King Arthur" and turned his house into a twentieth century fortress.

The house is "guarded by a highly sophisticated alarm system," originally designed to protect "big multi-room places with valuable contents," such as galleries and museums, which consists of special locks, cameras, floodlights and computer-operated motion sensors. And they know when a second or unauthorized person enters the premise. If the homeowner does not authorize the detected entry within several minutes, the system automatically rings the police station. So the house seems to be as safe as a small fortress and the security precautions reminded me of the locked room situation from M.P.O. Books' Een afgesloten huis (A Sealed House, 2013). And in both cases these modern and sophisticated alarm systems utterly failed to offer any protection to their owners.

Dr. King is discovered by his neighbor, who peered through a window, with "a ruddy great bronze sword sticking in his chest," engraved with "EXCALIBUR" and "MADE IN INDIA," but the meat of the problem is that the body was found inside locked-and bolted room within a highly secured house surrounded by freshly fallen snow – which showed the paw prints of a dog and footprints going to the locked windows. They offer no explanation how the murdered managed to enter and leave the premise without triggering the alarms.

So the crime-scene is handed over to Detective Chief Inspector Sidney Walsh and the members of his Serious Crimes team, which are mainly represented by Detective Constable Brenda Phipps and Detective Sergeant Reginald Finch. I think their investigation constitutes the best aspect of Deadlocked.

Unlike so many of his contemporaries, Hunt's writing is not crippled by grand delusions of being a great novelist and simply attempted to merge a traditional (locked room) mystery with a modern police procedural. As a result, the plot is practically bare of any side distractions that usually emerge from the private lives of the series-characters and nearly all of their attention is focused on solving the murder by talking to the family members, colleagues and enemies of King – as well as giving considerable thought to the impossible aspect of the case.

Obviously, Hunt did try to give the book a touch of realism by observing rudimentary police procedure and pointing out some of the unpleasant aspects of real police work, such as attending autopsies, but the structure of the plot is that of a detective story. So you would assume I made a great discovery here. Unfortunately, I have to report that the plot fell apart in the final chapters.

First of all, the elaborate, multi-layered premise of the locked room problem was far better than the given solutions: the answer to the strange footprints in the snow was ridiculous. The explanation for the locked and bolted room within the house was routine and not very original, but made for a proper locked room. Finally, I was profoundly disappointed when I learned how the security system was bypassed and how this method was connected to the murderer. A murderer whose revelation (and motive) was somewhat of a cheat and the complicated scheme this person executed had far more success than is believable.

So, while I was not expecting a modern classic from Hunt, I began to expect something more from him by the time the final chapters rolled around. Unfortunately, this was not the case and came away disappointed, but that's the gamble one takes with these little-known mystery writers. Hopefully, I'll be more lucky the next time.
Geplaatst door TomCat on 11/25/2016