"A crime has been committed by an unknown assassin, within a short distance of the principal streets of this great city, and is surrounded by an impenetrable mystery. Indeed, from the nature of the crime itself, the place where it was committed, and the fact that the assassin has escaped without leaving a trace behind him, it would seem as though the case itself had been taken bodily from one of Gaboreau's novels, and that his famous detective Lecoq alone would be able to unravel it."
- The Argus Newspaper (Fergus Hume's The Mystery of a Hansom Cab, 1886)

Octavus Roy Cohen was a fiction writer who began in the editorial departments of several newspapers, such as the Birmingham Ledger, Newark Morning Star and The Bayonne Times, followed by opening his own law practice when he was admitted to the bar in 1913 – which he closed after only two years to become a full-time writer. Over the next five decades, Cohen would make a name for himself as an author of detective stories and comedic fiction, but also turned his pen to radio, television and movie plays. It was a long and extensive career. 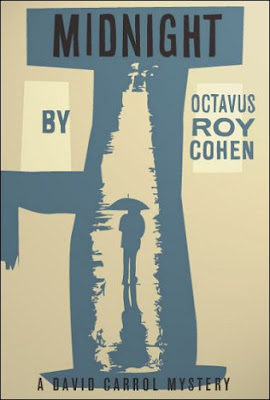 Jon Breen wrote a short piece about his crime-fiction, "A Note on Octavus Roy Cohen," which briefly touched upon one of his most controversial characters, Florian Slappey, who is now regarded as politically incorrect, but the article is chiefly concerned with Cohen's earliest series-character.


David Carroll is a boyish-faced man in his late thirties and an amateur criminologist of some renown, which is a talent he often places at the disposal of his friend, Police Chief Eric Leverage. Between 1919 and 1922, Carroll appeared in four novels and one of them was once recommended as a locked room novel that was overlooked by Robert Adey when he compiled Locked Room Murders (1991). I can see why some would regard the book as a neglected impossible crime story, but I can also understand why others would contest their claim. But more on that later.

The book in question is simply titled Midnight (1922) and takes place during the December reign of King Winter, which had come with freezing blasts that had turned the sidewalks into sheets of ice and forced the people to seek refuge "under mountains of blankets" – except for one taxi-driver, Spike Walters. Spike has to brave the mind numbing cold and navigate the frozen thoroughfares, but even on a wintry night he's able to pick up a fare from the steps of Union Station. A veiled woman, snugly wrapped in a long fur coat, carrying a purse and a large suitcase.

Surprisingly, the handsomely dressed woman asks to be driven to an address in a poor, rundown neighborhood and Spike, chilled to the marrow, has a miserable journey, but suffering through the December gale is only the beginning of his night – as there's a surprise waiting for him in the backseat. Upon arrival, Spike says "here y'are, miss—No. 981," but she does not respond or opens the backdoor of the taxicab. She has disappeared, but someone else has taken her place: the body of a man, huddled on the floor, with a bullet wound in the chest! The situations seems like an impossible one.

I think these first two chapters constitute the best parts of the story, which excellently set the mood and wonderfully depicted a city paralyzed by winter. One that has automobile-owners pouring alcohol into their radiators and cars skidding dangerously across the icy roads, but also shows its effect on Spike and how the biting cold even made the scalding, coffee-flavored liquid from the White Star Café seem like a comfort.

You can almost feel the coldness blasting from the pages, but, once the police are called in, the plot eases into a regular, 1920s American-style whodunit and the title of the book can easily be changed into the Van Dinean The Warren Murder Case. It was even referred to as such by one of the characters! Anyhow... 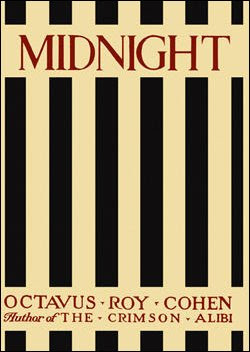 Chief Leverage recognizes the dead man as Roland Warren, a moneyed man about town, but the professional bachelor recently got engaged to Miss Hazel Gresham – who's the "kid sister" of his best friend, Garry Gresham. However, the evidence shows Warren may’ve been planning to elope, but not with his young fiancé and this makes it even more pertinent that they find the veiled lady. There are, however, some additional obstacles: the suitcase yields no clues as to her identity and the victim’s ex-valet, William Barker, is obviously sitting on important information.

So Leverage threatens bodily harm if Carroll refuses to butt in on "the taxicab tragedy," but "the circumstances smacked of the impossible" and "made an almost irresistible appeal to his love for the bizarre in crime." Carroll eventually manages to ferret out an explanation from the facts and suspects, which provides an answer to the seemingly impossible questions haunting the case. However, these answers will disqualify the story to some as an impossible crime story, because hardly anything remains of the concept of a locked room mystery once the murder is seen from the perspective of the perpetrator. It was never the intent of the murderer to create a baffling and inexplicable crime. But the characters and reader stumbled across the aftermath of this crime and its remnants gave off the impression of a locked room on wheels.

Since the double-pronged impossibility from the opening chapter was provided with a rational and logical answer, I decided to tag it as a locked room and impossible crime, but some of you will probably disagree.

So, all in all, a nice and fairly competently plotted detective story, which had a couple of well-written and memorable opening chapters, but the remainder of the book never managed to catch-up with the quality of those chapters. Overall, it was a nice read and I'll probably return to the David Carroll series, because I read some good and interesting comments about Six Seconds of Darkness (1918).

Thus far this short, lukewarm review. No idea what I'll pick up next, but I'll make an attempt not to overdose on impossible crime stories (like last month) and spread them out a bit.
Geplaatst door TomCat on 11/08/2016